Chinese phone maker Xiaomi said on January 22 that sales of Mi 11 have surpassed 1 million units 21 days after launch, making it the fastest flagship of Xiaomi's phones to break that sales threshold.

On the day of its launch on January 1, Xiaomi said Mi 11 sales surpassed RMB 1.5 billion ($231 million) within five minutes of going on sale, making it far more popular than the Mi 10 series.

Zeng Xuezhong, vice president of Xiaomi Group and president of the cell phone department, said a total of 350,000 units were sold in five minutes.

With a price starting at RMB 3,999 and the Snapdragon 888 flagship processor, Mi 11 became one of the most popular high-end flagship phones since the beginning of this year.

Mi 11 is not only equipped with the Qualcomm Snapdragon 888 chip but also features a 6.81-inch 2K resolution 120Hz curved screen with DCI-P3 color gamut support and brightness of 1500nit.

DisplayMate gave its screen the highest A+ rating, breaking 13 records. 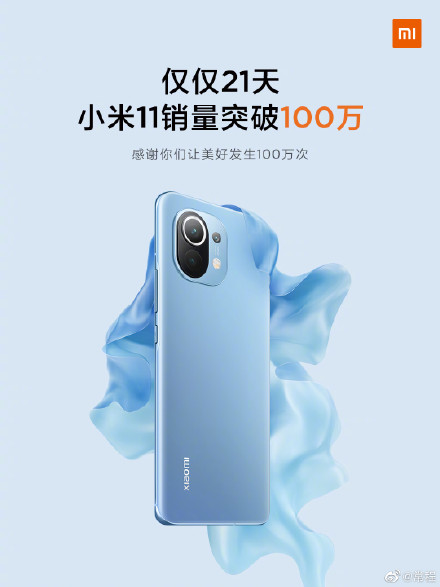