After Thursday's after-hours announcement of an additional ADS offering, NIO shares have been trading lower for the past two days in a row. But in Deutsche Bank's view, this is not something to fear.

According to Zhitong Caijing, Deutsche Bank analyst Edison Yu reiterated his "buy" rating on NIO in his latest report, with a price target of $50.

The analyst believes that NIO's move has little to do with plans to replenish its capital, but more to take advantage of current market conditions and create an edge for itself.

On December 10 after the bell, NIO announced plans to issue an additional 60 million ADSs. On December 14, the company announced the offering of 68,000,000 American depositary shares (ADSs), each representing one Class A ordinary share, at a price of $39.00 per ADS.

NIO has granted the underwriters in the offering a 30-day option to purchase up to an additional 10,200,000 ADSs.

NIO sets price for additional ADS at $39, 7% below Friday's close

In Yu's view, NIO doesn't need the money because it had nearly $3 billion in cash reserves at the end of the third quarter.

But given the company's stock's cumulative 155 percent gain over the past three months and generally bullish investor sentiment, the company sees this as a time to act in an opportunistic manner, Yu said.

Although its shares overall have pulled back from recent highs, this may be a reflective opportunity for investors to revisit the stock's investment strategy, given the company's valuation and the fact that other new energy vehicle companies are also making significant additions, the report said.

Overall, Yu said, the competitive landscape in China's electric vehicle industry is intensifying, but NIO's efforts to expand its market share appear to be bearing fruit.

This is why NIO chose to issue additional ADSs

Considering the company's growing brand recognition - customer referrals rose to 62% this year from 52% in 2019 - and production rising to 75,000 units per month in January, the analyst expects NIO's record sales to continue ahead of the Chinese New Year holiday.

Yu's forecast is in line with most Wall Street analysts. Of the analysts tracking the stock, seven recommend buy and four recommend hold, with a consensus rating of "Moderate Buy" and an average price target of $49.01.

NIO shares went up by 2.46 percent pre-market on Tuesday. 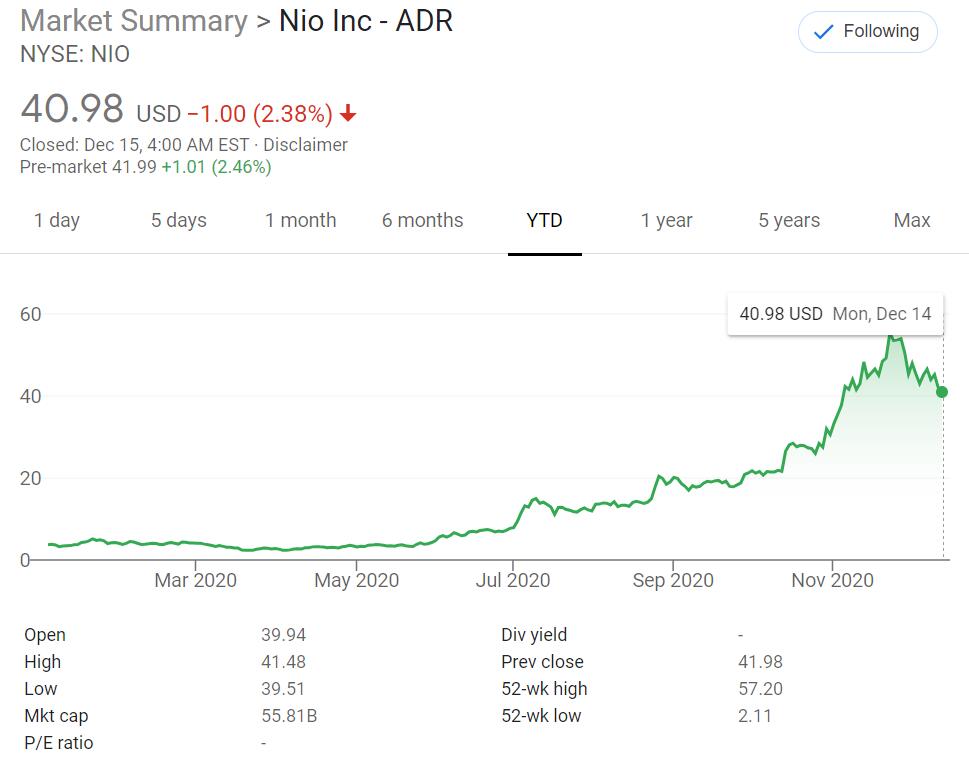 On Monday, Yu gave XPeng a buy rating and a $58 price target in his first report covering the company.

Yu said XPeng was part of the "Fab Four" Chinese EV makers, which also include NIO, Li Auto, and WM Motor, that represent an emerging class of automakers backed by large technology companies and local governments looking to disrupt the auto industry.

"We believe our thesis has been playing out both on the ground as sales and brand awareness grow, and in the capital markets where all four companies have seen their valuations rise considerably," Yu wrote in his report.