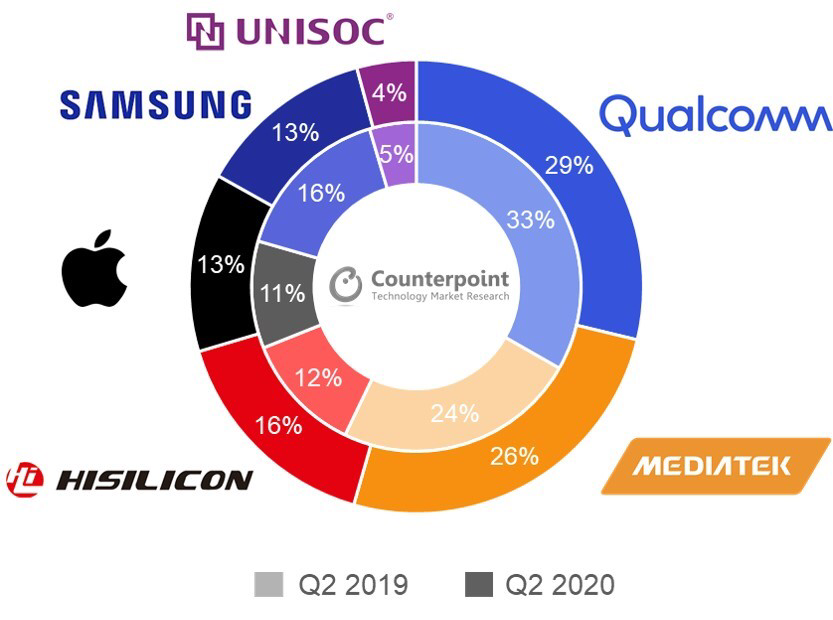 Qualcomm still led the global smartphone application processor (AP) market in the second quarter, but lost share to Huawei, according to a recent Counterpoint report.

The smartphone application processor market declined 26% in the second quarter as smartphone sales plummeted due to the COVID-19 pandemic and resulting restrictions.

“While the overall smartphone market declined due to the ongoing pandemic, the decline in market share for Qualcomm was partly also due to Huawei, which increased the use of HiSilicon APs after US restrictions, and its growing share in China, the world’s largest smartphone market,” said Neil Shah, VP of Research at Counterpoint.

More restrictions on Huawei’s (HiSilicon’s) ability to manufacture chipset at TSMC cast a major doubt on its future smartphone sales, the report noted.

OPPO, vivo, Realme and Xiaomi will be the key drivers for Qualcomm and MediaTek as they look to fill the big gap which Huawei might leave behind in near- to mid-term, said Counterpoint Research Analyst Shobhit Srivastava.

"And this could be more beneficial for Qualcomm in the premium segment ($400+ wholesale), especially in China where Huawei dominates with over 40% market share, and in the mid- to high-tier segments in markets like Europe," Srivastava said.