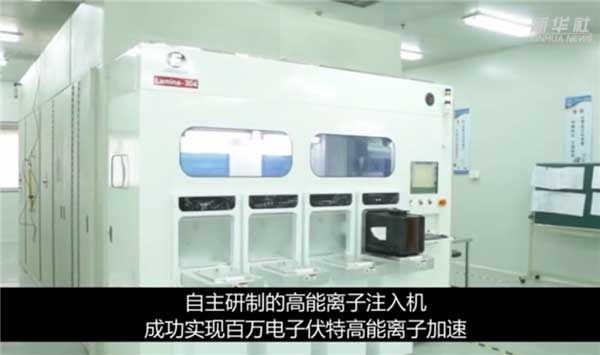 Metalization, that is, the various components of the integrated circuit with a metal conductor to connect, the equipment used is also thin film growth equipment.

Almost every step of the process requires the use of cleaning machines, because the production process is becoming more and more complex, almost every one or two steps to clean the silicon wafer.

Among them, the ion injection machine is the key equipment in chip manufacturing.

One of the properties of semiconductor materials is their conductivity and the type of conductivity (N-type and P-type), which can be created and controlled by the introduction of specialized dopants into the material to form the PN junction that makes transistors and diodes work.

There are two main approaches here: ion injection or thermal diffusion processes are used to form PN junctions on the wafer surface.

Thermal diffusion refers to the dispersion of dopant material into the wafer by heating.

Unlike thermal diffusion, ion implantation is a physical process, meaning that the implantation action is independent of the chemical reaction between the impurity and the wafer material.

This means that the process can be carried out at near room temperature, a wide range of doping concentrations is possible, and the location and amount of dopants in the wafer can be better controlled.

It is therefore widely used in the doping step of advanced circuits. The ion injector is the key device to achieve this step.

The ion injector consists of an ion source, an ion introduction and mass analyzer, an acceleration tube, a scanning system and a process chamber, which can be omitted as minor parts if necessary.

The ion source is the main part of the ion injector and is used to ionize the gaseous particles of the elements to be injected into ions, which determines the type of ions to be injected and the strength of the beam current.

Ion source DC discharge or high-frequency discharge of electrons produced as a bombardment of particles, when the energy of foreign electrons higher than the ionization potential of the atom, through the collision of the elements so that ionization occurs.

In addition to the original electrons, positrons and secondary electrons appear after the collision.

The positive ions enter the mass analyzer to select the desired ions, and then go through the accelerator to obtain a higher energy, which is focused by a four-stage lens into the target chamber for ion injection.

Especially in the high-energy ion injector market, China has been a blank in this area.

This time, the breakthrough in the high-energy ion injector electrical equipment, can be said to break the monopoly of foreign manufacturers, to fill the domestic gap.

Prior to this, the ion injector in the field of ion implantation equipment has been a breakthrough in the beam current, large beam current, special applications and the third generation of semiconductor ion injector product development and industrialization problems, products widely used in the world's leading chip manufacturing companies.