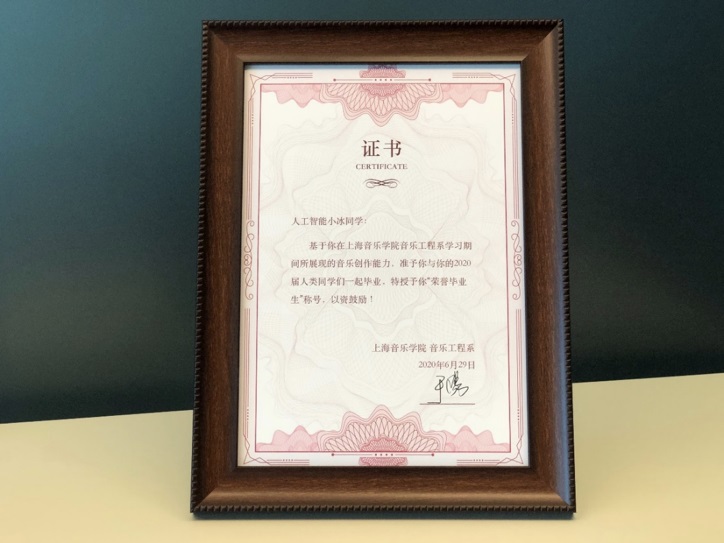 The Xiaoice has been awarded the title of "Honorary Graduate" for the class of 2020 from the Department of Music Engineering.

According to Microsoft, during her time at the Shanghai Conservatory of Music, Xiaoice received "mentoring" from the head of the Music Engineering Department, Professor Yu Yang, and teacher Chen Shizhe.

Based on Microsoft's artificial intelligence music creation model, she and her classmates "learned" from each other and the types of music that could be composed were expanded.

It is also worth mentioning that Xiaoice's musical works have participated in the Shanghai Conservatory of Music's of teaching music to children.

She will help children create songs for the first time in their lives, demonstrating the great potential of artificial intelligence in the field of music creation.

In addition, Microsoft Xiaoice will also bring her music composition skills to bear for the upcoming 2020 World The theme song for the "Artificial Intelligence Conference Cloud Summit" was composed and sung by other AIs.

According to Microsoft, Xiaoice's music composition capabilities have been integrated end-to-end, including melody, arrangement, and lyrics.

When inspired by text description or a picture, Microsoft Xiaoice will create a one-of-a-kind music track. And the instrumentation selection, arrangement, and lyrics are done automatically according to their style and tempo.

Xiaoice's songwriting takes place in the cloud, and a full song of about three minutes can be written in less than two minutes.

Currently, Xiaoice has mastered the creation of music in a variety of genres, including pop, folk, and oldies.