A new Xiaomi smart speaker patent shows a schematic diagram of a cylindrically designed smart speaker, which looks very similar to Apple HomePod, according to the website of the State Intellectual Property Office of China.

It has a 360-degree sound output and a possible touch-sensitive surface area. When voice commands do not work as expected, users can interact with the Xiaomi smart speaker by touch. 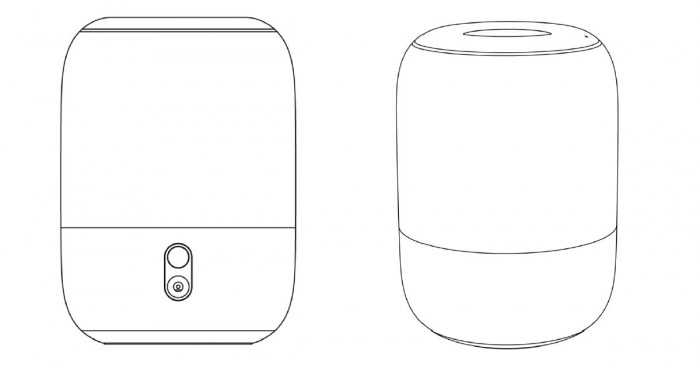 The patent shows that the upper surface of the Xiaomi smart speaker may have a circular surface similar to a disc.

It may provide two things, one is a mini OLED display panel that displays information such as connection status, volume, and media playback, and the other is a capacitive touch surface, which may provide volume, playback, media selection, etc. based on touch or gestures  control.

There seems to be a touch control on the top of the Xiaomi smart speaker, because there seems to be no other control method in the schematic diagram listed by Xiaomi in the patent.

Although voice is the main operation interface of smart home speakers, if the voice reception and response mechanism sometimes fails, the smart speakers will also be equipped with physical buttons to ensure that all functions can be used by users.

Therefore, if necessary, the top panel will likely be accompanied by control buttons to access the speaker settings.

Xiaomi smart speakers seem to be equipped with a 3.5mm audio interface, which is not very common for smart speaker buyers.

If Xiaomi really wants to launch such a product, whether it depends on the compatibility of Google Assistant or Amazon Alexa, or choose its own AI digital assistant, it will be an interesting thing.

Since Xiaomi has established its position in the smartphone business, Xiaomi has created a booming smart home ecosystem, and it is said that the smart speaker will be fully suitable for this ecosystem.