Baidu said on February 1 that the AI multi-body temperature rapid detection solution was used at Beijing Qinghe Railway Station, which can solve the problem of slow speed of traditional manual detection.

There are some limitations to the current temperature detection methods used in railway stations, airports, subway stations and other crowded public places.

The traditional frontal temperature gun detection speed is slow and increase the possibility of close contact, thereby increasing the risk of cross-infection.

While the fever screening system needs staff to be on-site to observe abnormal conditions with the naked eye, and the accuracy and efficiency of screening may be affected to some extent.

However, Baidu's AI temperature detection technology has largely solved the above problems. It is reported that the technology is based on the detection of key points on the face and the infrared temperature lattice temperature analysis algorithm of the image, which can detect the passenger's forehead temperature in a certain area, even if wearing a hat and mask can quickly screen. 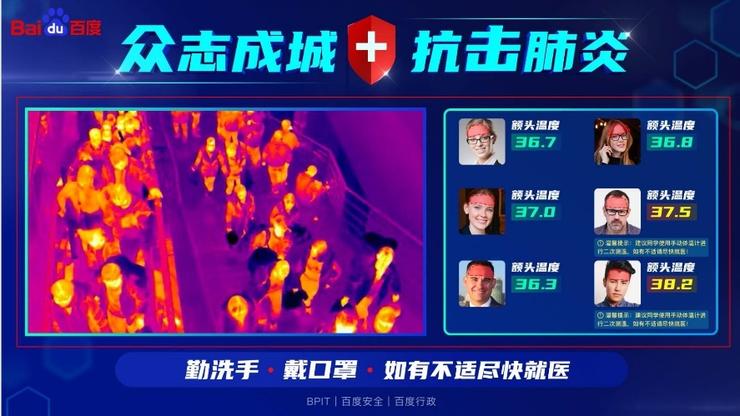 In addition to the improvement in screening efficiency, the solution is also easy to deploy.

For example, if a fixed-point camera is placed in the channel or an important area, the camera can complete a facial temperature rapid detection system of 3-5 people / batch without the need for crowd cooperation or weak cooperation. Currently, the system can measure temperature differences within 0.05 degrees Celsius.

For people whose body temperature exceeds a certain threshold, the system will issue alerts in seconds and provide face image information to help staff take timely and effective measures.

Due to the high traffic at the station, the fixed-point camera may miss the judgment. Staff can also use this solution to conduct non-contact inspections using mobile devices such as computers and mobile phones.

After the abnormal body temperature is found, the traditional frontal temperature gun is used for further measurement. While ensuring accurate screening, it also improves the efficiency of inspections.