Huawei for the first time reached the number 1 position with 55.8 million smartphones shipped in 2Q20 despite a small decline of 5.1% year over year, the data showed. 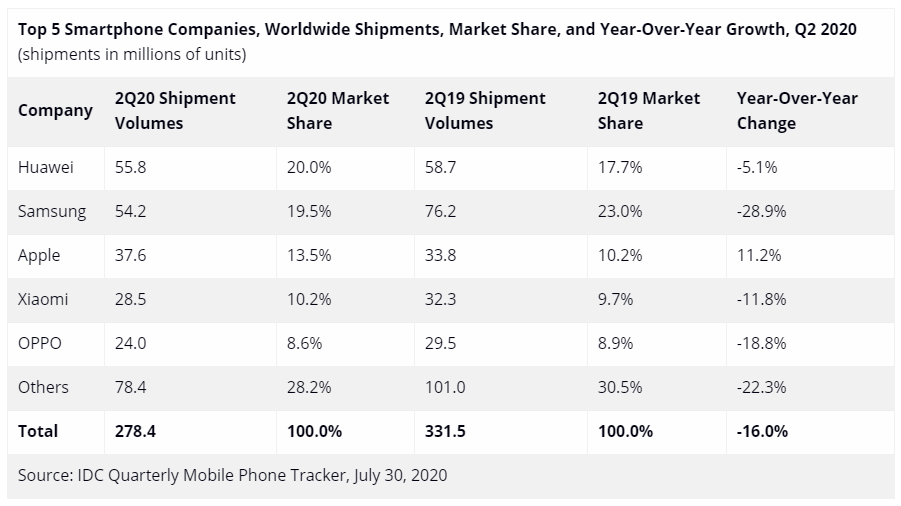 With the overall market declining even faster, Huawei also achieved its highest-ever share (20.0%) of the global smartphone market.

This was driven by Huawei's tremendous growth in China – almost 10% year on year – which offset the large declines the company faced in every other region, IDC said, adding that looking forward the impact of the U.S. technology ban will continue to create uncertainty for Huawei in foreign markets.

"The smartphone supply chain ground to a halt when the pandemic hit. However, recovery, specifically in China, has been strong," said Ryan Reith, vice president, Worldwide Mobile Device Trackers.

Samsung shipped 54.2 million smartphones in 2Q20, finishing a close second with 19.5% share. However, the Korean giant suffered a 28.9% year-on-year decline, the most significant among the Top 5 vendors.

Apple shipped 37.6 million iPhones in 2Q20, which placed the company in third with 13.5% share of the market. iPhone shipments managed to climb 11.2% year over year thanks to the continued success of its iPhone 11 series and the timely launch of the new SE (2020).

Xiaomi shipped 28.5 million devices maintaining its number four position and achieving a 10.2% market share despite a decline of 11.8%.

OPPO returned to the Top 5 this quarter with 24.0 million units and 8.6% market share despite a 18.8% year-on-year decline. Roughly 60% of OPPO's shipments were to its domestic market of China, which was a key factor in getting the vendor back into the top 5 globally.

According to a report by market research firm Canalys, Huawei shipped 55.8 million smartphones in the second quarter, supposing Samsung's 53.7 million to become the world's biggest smartphone vendor for the first timeThat's not because Huawei saw big surge in their smartphone shipments. Instead, Huawei's shipments went down by 5% year on year in the quarters. But second-placed Samsung saw a 30% fall from the previous year.