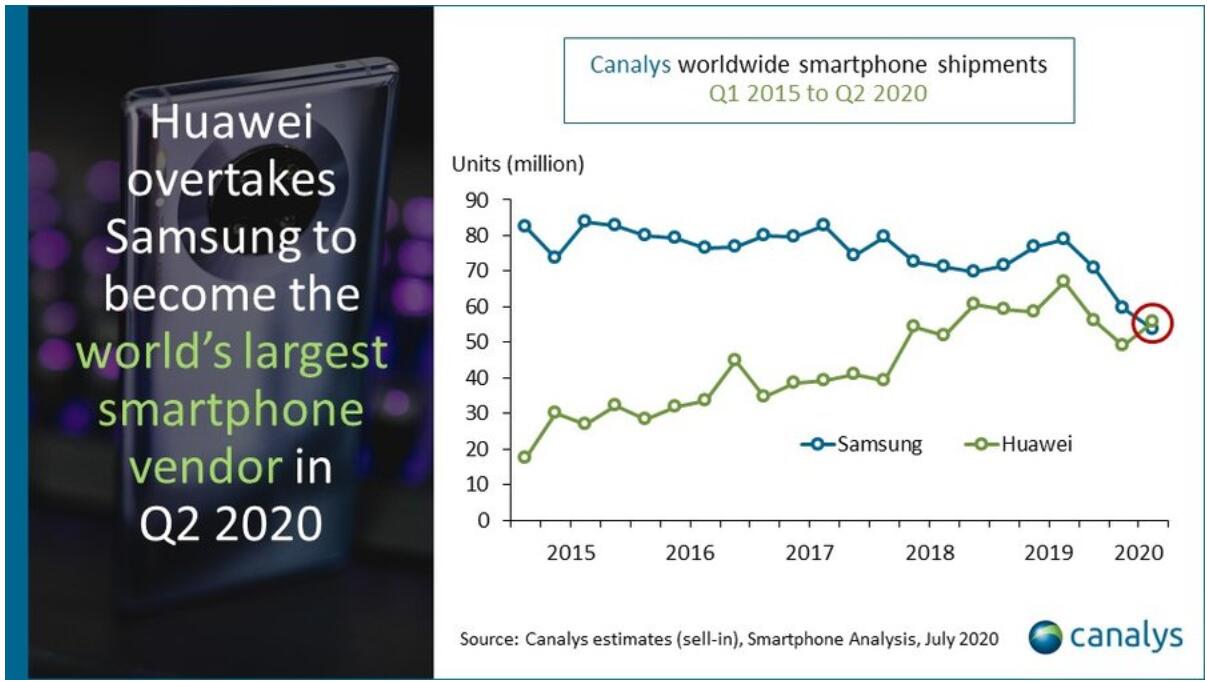 Huawei shipped 55.8 million smartphones in the second quarter, supposing Samsung's 53.7 million to become the world's biggest smartphone vendor for the first time, according to a report by market research firm Canalys.

That's not because Huawei saw big surge in their smartphone shipments. Instead, Huawei's shipments went down by 5% year on year in the quarters. But second-placed Samsung saw a 30% fall from the previous year.

Huawei's overseas shipments fell 27% in Q2. But it has grown to dominate its domestic market, boosting its Chinese shipments by 8% in Q2, and it now sells over 70% of its smartphones in the Chinese mainland.

"This is a remarkable result that few people would have predicted a year ago," said Canalys Senior Analyst Ben Stanton.

"If it wasn't for COVID-19, it wouldn't have happened. Huawei has taken full advantage of the Chinese economic recovery to reignite its smartphone business."

Samsung has a very small presence in China, with less than 1% market share, and has seen its core markets, such as Brazil, India, the United States and Europe, ravaged by outbreaks and subsequent lockdowns, Stanton said.

"Taking first place is very important for Huawei," said Canalys Analyst Mo Jia, adding that "It is desperate to showcase its brand strength to domestic consumers, component suppliers and developers."

It needs to convince them to invest, and will broadcast the message of its success far and wide in the coming months. But it will be hard for Huawei to maintain its lead in the long term, Jia noted.

Its major channel partners in key regions, such as Europe, are increasingly wary of ranging Huawei devices, taking on fewer models, and bringing in new brands to reduce risk. Strength in China alone will not be enough to sustain Huawei at the top once the global economy starts to recover, Jia said.