Home Crypto Digital RMB: How is it different from WeChat and Alipay?

Digital RMB: How is it different from WeChat and Alipay?

Recently there was a screenshot of a phone with not much clarity that began to circulate hotly online.

This is a completely different image from our current RMB, but with many familiar elements added, such as "payment by scanning code", "remittance", "payment collection", etc.

And it is, precisely, the legendary PBOC digital currency DC/EP. 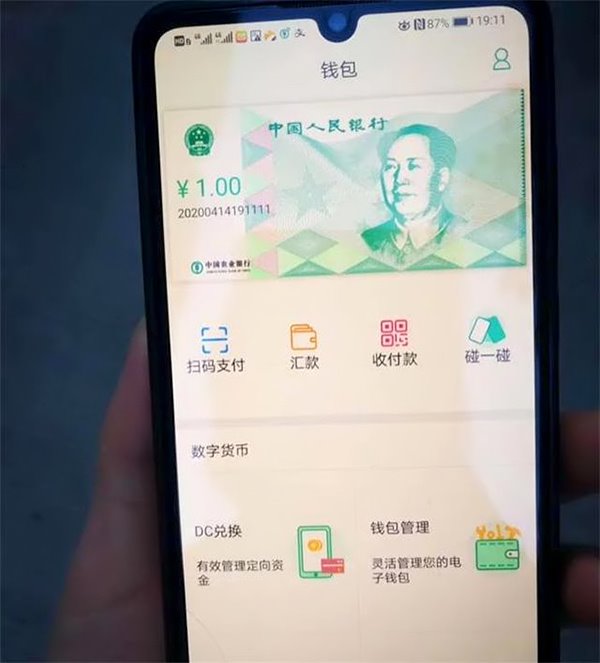 What exactly is a DC/EP?

The concept of digital yuan is very broad, and it uses the most advanced regional chain technology available. For the general public, we just need to know that its experience is probably about the same as the daily use of WeChat and Alipay. Due to the unique legal solvency of the digital yuan, there is no difference between using a digital yuan and pulling a bill or coin out of your pocket.

How is it different from WeChat and Alipay?

Compared to PBOCDC/EP, Alipay and WeChat came out much earlier, and people understand it much better. So what is the difference between DC/EP and WeChat and Alipay?

No matter how widely WeChat and Alipay are used in real society, there will still be cases where the shopkeeper won't accept it. This is due to the fact that these two are, after all, just ordinary commercial companies. The shopkeeper doesn't believe it, and there's nothing you can do about it.

WeChat, Alipay have one big drawback and that is complete dependence on the internet. If you don't have the internet on your phone, there's no way to trade. This is not the case with PBOCDC/EP, which supports two-way offline payments and transactions (this is different from bank cards or mobile payments, which are more of a cash feature! . In other words, even if both the payer and the payee are offline, the transaction can be completed.

What DC/EP calls "dual offline payment" is a bit like the previous credit card press order. That is, when the communication between the two parties is not good, the first software "bookkeeping", when the normal implementation of security verification, then send to the server for comparison and debit.

Before making a transaction through WeChat or Alipay, you should first tie up one of your own bank accounts. Behind every payment you make is actually WeChat and Alipay deducting money from your card in real-time and then executing related transactions. It's just that it's all done automatically and usually unbeknownst to us.

But PBOC's DC/EP is different in that it doesn't require a bank account, just sign up for a digital wallet of your own. This is also a very important difference between WeChat and Alipay at the moment.

Unlike WeChat and Alipay, DC/EP is the future legal tender of the country, so its settlement body is the People's Bank of China (PBOC). WeChat and Alipay are just electronic improvements to the current RMB settlement method, with commercial banks as the main payment settlement.

Just as our cash goes into our wallets, the digital currency has to have a "container" to hold it, and that's it - the digital wallet.

Those who have played with bitcoin are no strangers to the concept of a digital wallet. You can totally think of it as a mobile APP, and after registering with personal information, the wallet is unique and belongs to you for life.

Although the PBOC's explanation of the digital wallet is minimal, the leaked screenshots show that it will include at least a few features such as "swipe payment", "remittance", "payment collection", "touch" (which should be similar to NFC's near-field payment function).

At the same time, users can easily convert bank funds into digital yuan, and the digital currency you exchange will show the source bank so that users can manage the movement of funds.

On an operational level, it's at least close to the current WeChat or Alipay.

How to get digital currency

Like the traditional RMB, digital currencies will follow the bank placement model. In other words, the People's Bank of China (PBOC) places money first with commercial banks or other financial institutions and then with the public. This logic ensures that digital currencies are not over-issued at the time of placement and that the corresponding quota request is sent only when the currency generates a request and the checksum rules are met.

For the public, banks continue to be the main way to access digital currency. One of the most intuitive is to use your existing bank account to exchange an equal amount of digital yuan. Once the redemption is complete, your bank account will be reduced by a corresponding amount, which is the same as a daily cash withdrawal.

As for the later stages, DC/EP transactions can be used for payroll, small transfers, sporadic consumption. And on all these occasions, digital currency is also available.

It should be noted that DC/EP is currently under internal testing and is only available to a limited number of whitelisted customers. At present, PBOC is using a four-site, one scenario model, i.e. four sites (Shenzhen, Suzhou, Xiong'an New District, Chengdu) and one scenario (Winter Olympics scenario) for internal testing. where DC/EP is generated by replacing the banknotes in circulation with equivalent ones.

Can I use it to buy food in the market?

The answer is yes!

As long as both buyers and sellers have a PBOC digital wallet (APP) or an offline payment method (similar to WeChat QR code), they can make transactions. Since the DC/EP is a state endorsement and has full legal indemnity, no one can refuse it. Therefore, the scope of application will be wider than the current WeChat and Alipay.

What's the difference with traditional cash?

WeChat and Alipay are a firestorm because they save us the trouble of making a change in our daily lives. It's not easy for you to carry a pile of change, and it's not easy for the store owner to give you change.

And this is precisely the advantage of digital currency, where all change is represented in the account as a single set of numbers, and the payment system simply adds and subtracts. You save yourself a lot of trouble, and the shopkeeper is relaxed.

There is a risk that cash will be lost because it is not uniquely identifiable. In other words, if the $100 you have in your pocket is lost, the chances of getting it back are very low.

And the tamper-evident nature of digital currency ensures that the chance of loss becomes extremely low, which is actually similar to the e-tickets that are currently being heavily promoted by railways.

In the past, we often lost our tickets when we were traveling, which caused a lot of trouble to the entry and exit stations and the ticket inspection on the train.

Our life is gradually entering the era of electronic payment, car sweep, payment sweep, into the community sweep code .......

But perhaps you've discovered that all the software doesn't work, let's say you've just applied for a ride-through card in City A and have to switch to Alipay in City B.

I just installed a subway pass on the subway, but when I get to the bus, I have to replace it with a billion passes. This will change dramatically in the future when digital currencies are introduced.

Since DC/EP is a national legal tender, whether it is a public transport company, railway civil aviation, small supermarkets..., as long as the access to a digital currency payment device, everyone can use their digital wallet to complete the payment, no longer need to download a variety of APP.

DC/EP was designed to be anonymous from the beginning, in other words, our current mobile payments actually leave some "trace" to the merchant.

That's why, after you buy a product in an app, the system will intelligently recommend to you some products that you are interested in, the so-called "big data kill".

DC/EP's anonymous transaction features to ensure that after you pay, merchants, banks, and third-party platforms can't track your spending records, thus avoiding a lot of embarrassment and hidden problems.

Does the money get any more "gross"?

Every time a new currency issue is mentioned, there is always a feeling that it will lead to inflation (what is commonly known as "gross" money). In fact, PBOC already considered this issue when designing the DC/EP.

Currently, China implements an equivalent substitution in the existing circulating RMB. And the PBOC has made it clear that the main replacement for DC/EP is the M0 in the existing monetary system (i.e., all the immediately available cash in circulation in society outside of the banking system, such as cash in your hands, cash in your business inventory, etc.).

With the replacement of the equivalent value, and the two rigid restrictions of only replacing M0, the issuance of the digital yuan will not have any impact on the existing financial system, and there will be no more "gross" money.

NO8. why issue digital currencies?

Having said that, why does the PBOC have to go to such great lengths to implement the digital yuan? In addition to these advantages above, there are actually several other layers to consider.

1. Consideration of the cost of issuing banknotes

And there is no such thing as a digital currency, as it is just a string of digital codes that no longer incur any costs, either for production or circulation. Economically speaking, DC/EP is completely superior to cash at this point.

2. Mobile payments are widespread and cash is used much less frequently

At present, the vast majority of domestic transaction scenarios have been implemented with mobile payments. In other words, you buy an onion from the market and you can also use your mobile phone to pay for it. And the rapid spread of mobile payments has naturally crowded out the use of traditional cash.

The increasingly high cost of minting coins, coupled with the diminishing usage scenario, is also a major reason for PBOC to launch digital currencies.

Traditional cash transactions are anonymized transactions, which creates a number of problems for anti-money laundering and counter-terrorist financing regulation. The unique identifiability of digital currencies, on the other hand, facilitates regulators to trace back the entire funding chain for more effective monitoring.

NO9. will cash be completely replaced?

Despite this and that benefit of digital currencies, it's impossible to completely replace cash in a short period of time.

First, as with e-tickets, we have to consider the many groups that do not have access to electronic money, including the elderly, the disabled, and many more children under the legal age.

Since digital currencies require at least one mobile phone as a carrier, in practice, low-income people in some less economically developed areas are also considered.

The introduction of the digital renminbi is not intended to completely replace cash notes, but rather to be a complement to the existing paper currency system. Just think about WeChat and Alipay nowadays, you can better understand.

Although it's all swipe code payments these days, anyone's wallet will have a few cash notes in it, just in case.