Home › Apps › Dark Mode is on WeChat for iOS, is that a compromise?
#Apps#

Dark Mode is on WeChat for iOS, is that a compromise? 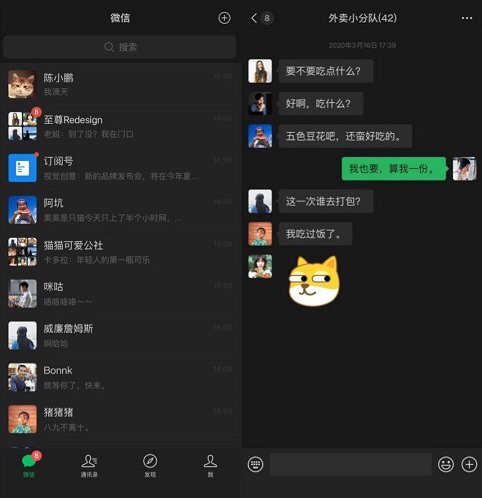 Users can go to iPhone settings and adjust the display and brightness to "dark" mode, and WeChat can automatically adapt.

When the user turns on the "Dark Mode", the WeChat home page, chat page, discovery page, public account article page, video account page, search page, WeChat payment page, etc. will automatically turn to dark. However, the pages on the applet, nearby restaurants, etc. are still white background and have not been adapted to the Dark Mode.

In addition, the WeChat Dark Mode currently only supports the iOS version, and the Android version has been tested in grayscale, and will be fully launched soon.

According to the Android developer documentation, the Dark Mode has the advantages of improving mobile phone life, improving visibility for people with high light sensitivity and low vision, and being suitable for low-light environments.

In addition, UI designer Ilke Verrelst emphasized in his article "The future is dark" that the Dark Mode has become the current trend in product design; and the Dark Mode on the iOS 13 and Android Q also confirms this view.

However, WeChat has not previously recognized the need for Dark Mode. On April 4, 2019, the question “Why no night mode?” Was explained by the WeChat team:

Your night is too precious, we can't bear to take it, and we don't want to be the reason why you wake up in the middle of the night to see your phone. May you sleep well every night.

On September 20, 2019, Apple officially launched the iOS 13 system, and the Dark Mode became one of the main push features. Officials point out that when users enable Dark Mode, all apps built using the iOS 13 SDK will run in Dark Mode.

On March 4, 2020, Apple updated the App Store review guidelines and announced that:

Beginning April 30, 2020, all iPhone apps submitted to the App Store must be built using the iOS 13 SDK or later.

There is even news that if the app in the App Store does not support Dark Mode, it may be forced to be removed by Apple.

In order to optimize the user experience, WeChat and Apple reached a cooperation to jointly explore the Dark Mode experience of WeChat on the iOS system. At present, the feature has been developed and it is expected to be launched in the next new version.

Some netizens have called this "advocacy" for WeChat's change, and WeChat also admitted that: