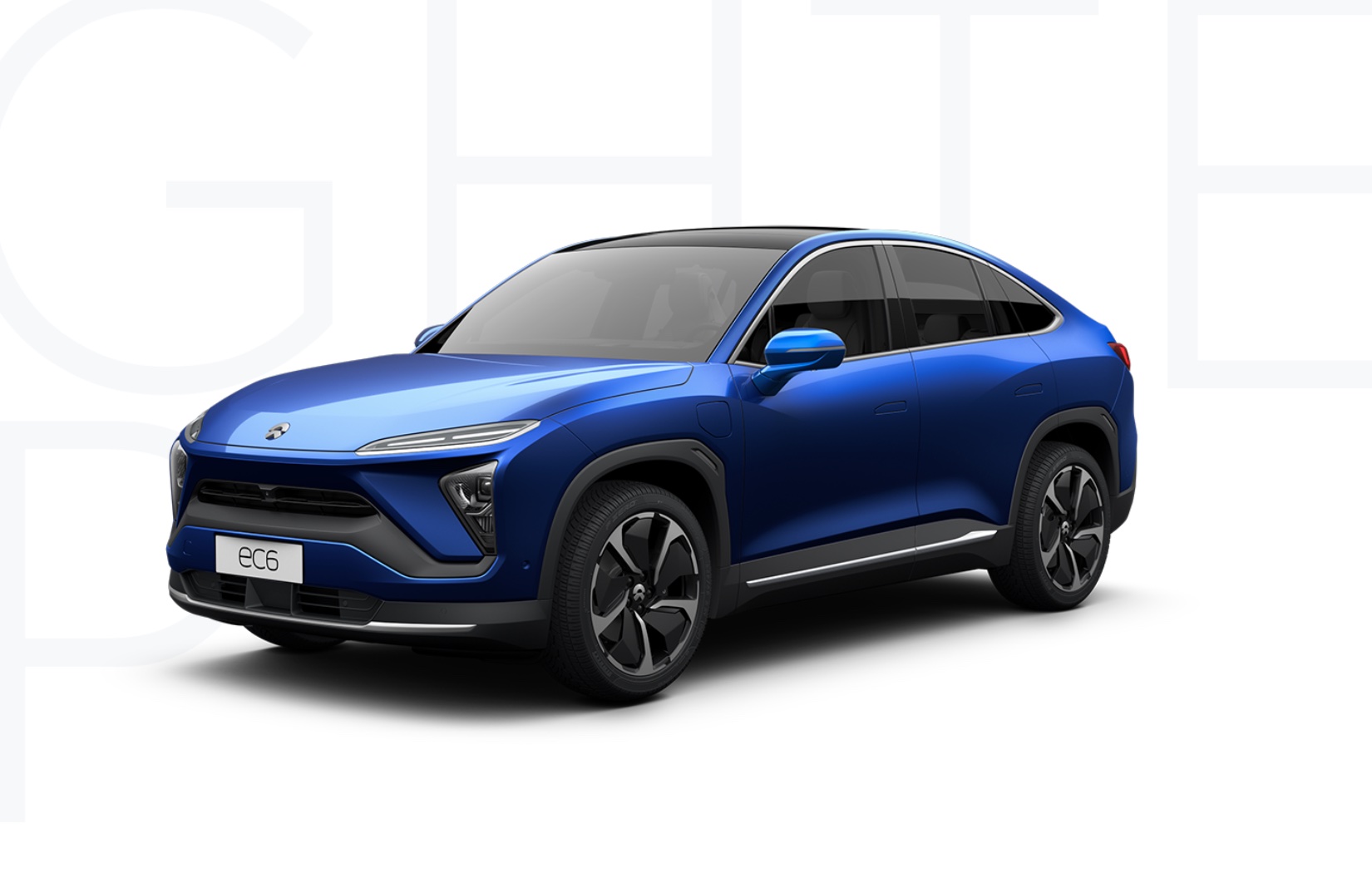 The stock price of NIO (NYSE: NIO) has been rising strongly lately, and envious Chinese investors are looking to profit from it, so they are desperately looking for any connection between their portfolio companies and the US-listed Chinese EV maker.

On p5w.net, China's most popular platform for direct communication between listed companies and investors, a large number of investors have recently asked if their portfolio companies have any cooperation with NIO.

And for these companies, if they do work with NIO, they make no secret of the fact that they are telling investors, because that usually means their stock is going to be more popular.

Below is a screenshot of some of the investor questions and the Chinese pages of the company's responses automatically translated into English. Because Google Translate isn't that smart, NIO is sometimes translated correctly, but most of the time it's translated as "Wei to". 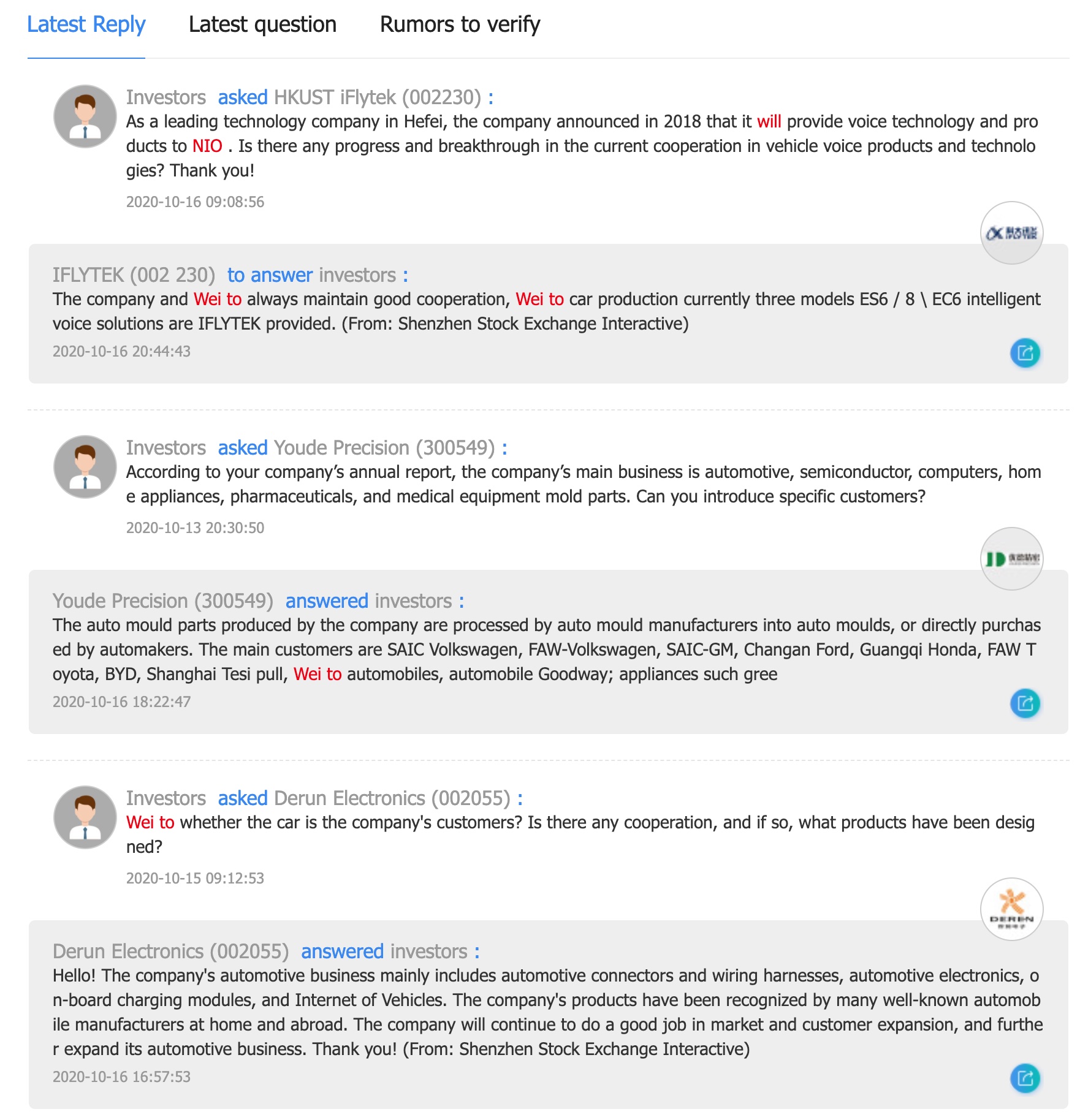 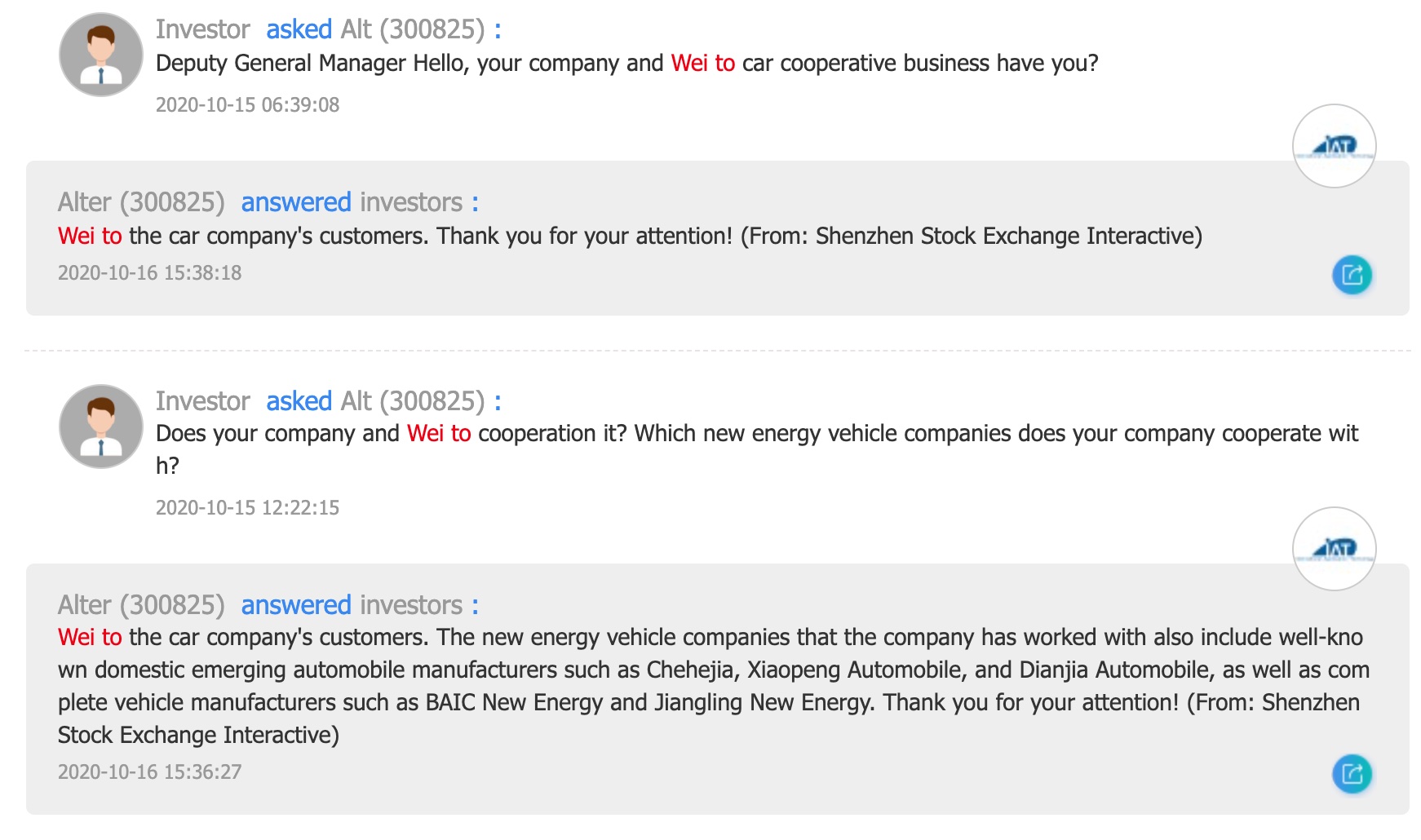 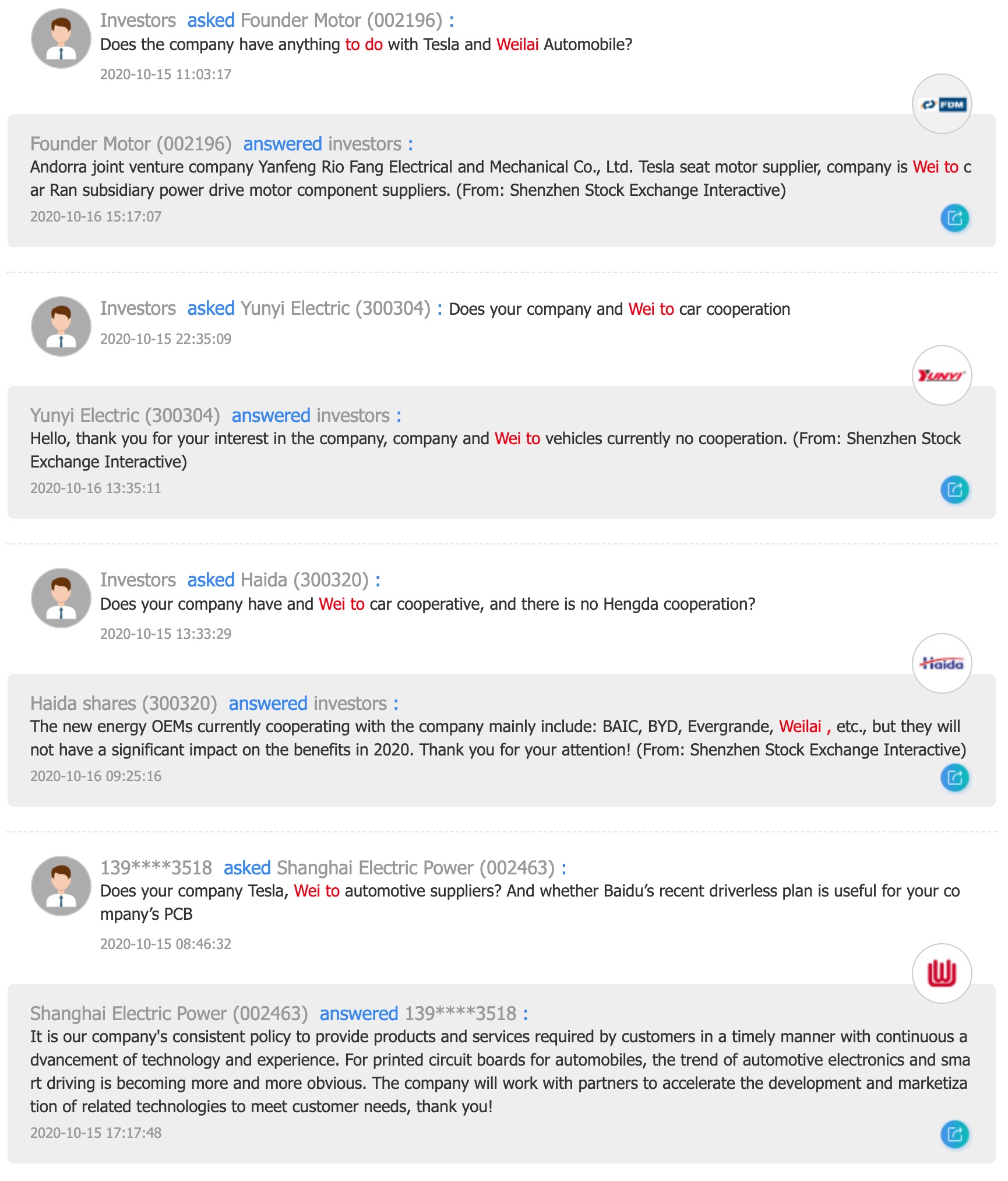 NIO shares surged 22.57 percent on Wednesday, then rose 6 percent on Thursday and 1.5 percent on Friday.

As recently as March of this year, NIO was in the limelight for its cash flow problems. Half a year later, as of October 16, NIO shares have risen more than tenfold. 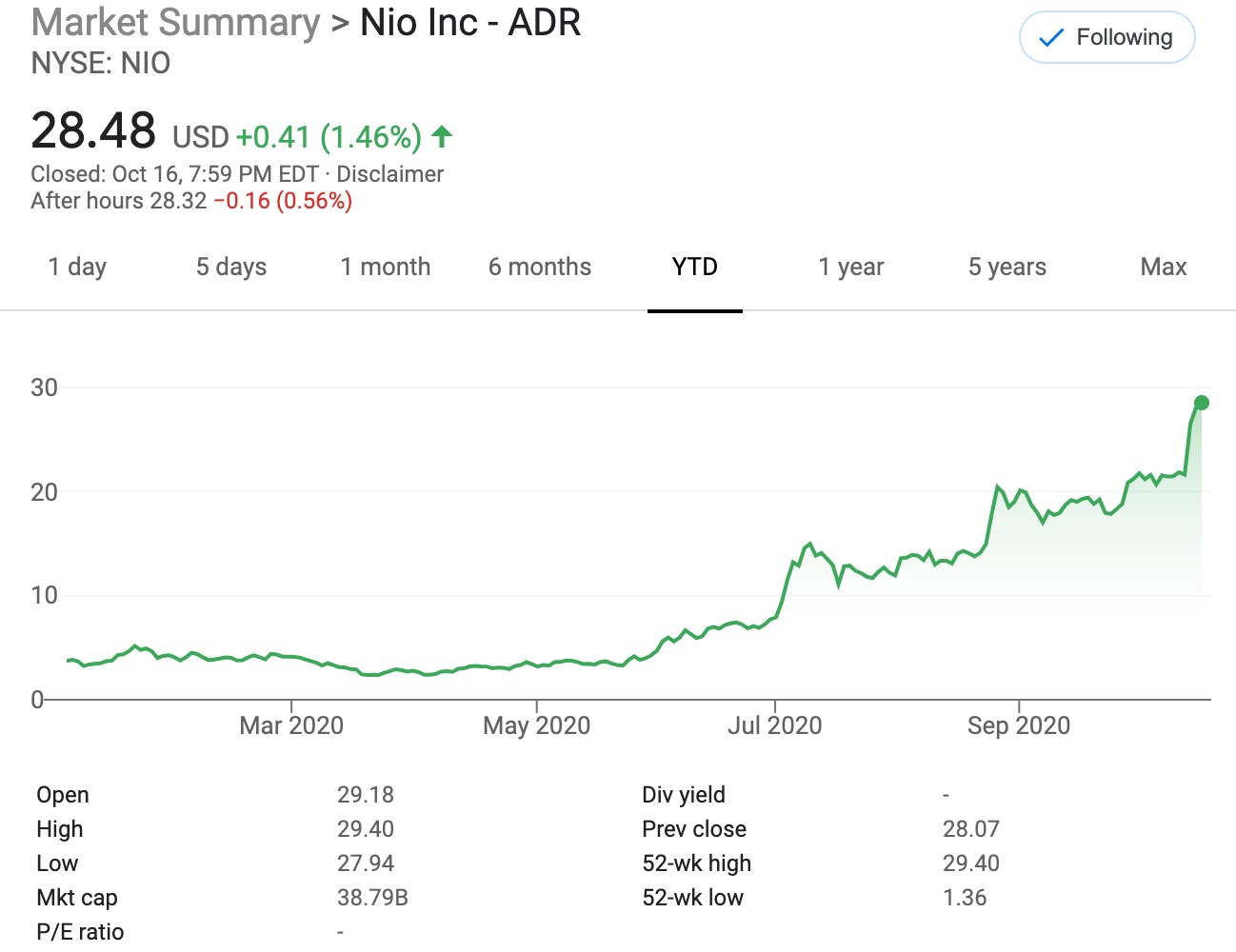 Since the beginning of the year, China's A-share auto sector has continued to move upward, up more than 40 percent, especially after mid-April, the overall valuation of the entire auto sector is on the rise.

The boom in the sector is closely related to the data.

According to the latest products and sales data released by the China Association of Automobile Manufacturers, China's auto production and sales in September completed 2.524 million and 2.565 million units, up 19.1 percent and 17.4 percent respectively, up 14.1 percent and 12.8 percent year-on-year.

According to the research team at Huatai Securities, the auto industry is expected to continue to maintain a high level of prosperity as the fourth quarter, which is usually the peak season for auto sales, approaches the end of the year.

Anxin Securities also expressed optimism that the industry's sales will pick up in the second half of the year, and that the leading independent brand companies Geely Automobile, BYD, and Great Wall Motor will improve their sales and market share month by month with a large number of new cars on the market.