Huawei is expected to release its flagship phone Mate 40 series with Kirin 1020 chip as soon as September, the Securities Times reported, adding that the Mate Watch smartwatch running Harmony OS 2.0 could also be released at the same time.

Huawei's high-end flagship, the Mate 40 series, will be released in the second half of the year to compete with Apple's iPhone 12.

Huawei released the P40 series flagship phones in the first half of the year, achieving excellent sales results and further expanding its share of the mobile phone market.

According to IDC, Huawei's market share rose to 42.6% in the first quarter of this year, although the overall mobile phone market declined significantly.

The second half of the year will be the time for Huawei to prepare for the launch of the Mate series flagship.

However, due to the impact of the U.S. sanctions, whether the stockpile of the Mate 40 components is enough caused widespread discussion.

Industry rumors showed that core components needed for the Mate 40 series are enough, and the first batch of supply maybe around 8 million units.

Work is progressing well ahead of the official launch of the Mate 40 series, and Huawei is secretly conducting trial production of the Mate 40, which will be released at the end of September at the earliest.

The biggest highlight of Huawei's Mate 40 series is that it is likely to be the first phone to be powered by Hisilicon's state-of-the-art Kirin 1020 chip, which is manufactured using a 5-nanometer process and will likely join Apple as the world's first manufacturers to release a 5-nanometer chip.

Despite a series of troubles, but Hisilicon's current stock of chips is enough to support the launch of the Mate 40 series.

The Kirin 1020 chip will integrate 14 billion transistors and offer a performance boost of nearly 50 percent over the Kirin 990.

It also continues to lead the way in 5G, with integrated SA and NSA-enabled 5G baseband, which can protect users from being easily phased out over the next three to four years.

In addition, it has integrated Da Vinci Architecture NPU 2.0, which further increases AI computing power and processes images faster, which is important for the Better support for taking pictures.

It has five Leica cameras consisting of 12-megapixel latent and normal telephoto and ToF and is expected to score more photos than the Huawei P40Pro.

On the screen, Huawei is likely to use the latest 2K resolution curved screen, which is predicted to feature the long-rumored under-screen camera.

From the exposure of the prototype, Huawei Mate 40Pro with three-sided screen design, the front, left and right are wrapped in the screen, the right side of the middle frame screen to add support for photography, take photos by simply sliding the middle frame of the screen to complete the fine-tuning of the details.

According to LetsGoDigital, Huawei has filed a new patent for the smartphone screen design, featuring a screen that extends to the traditional button locations on either side of the body. 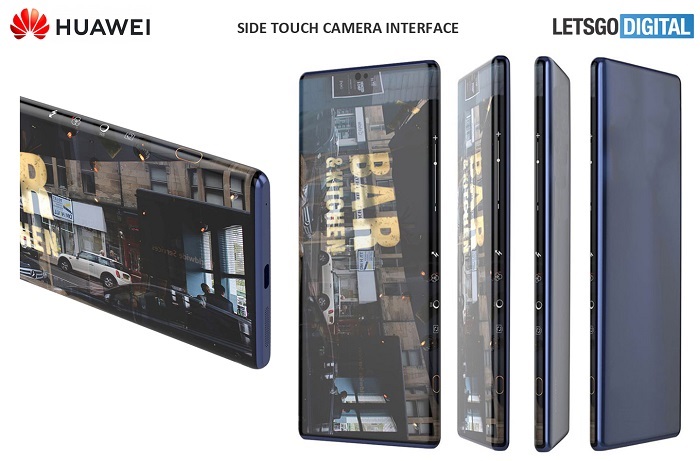 Software-wise, the Mate 40 series will use EMUI 11, with GPUTurbo 4.0 technology. Huawei's HMS service has also been added.

Huawei is not only announcing the Mate mobile phone products but also the Mate Watch smartwatch and MatePod headset products will also appear at the press conference.

According to Huawei's Harmony roadmap, after applying the first generation Harmony OS 1.0 smart screen. Harmony OS will be upgraded to version 2.0 in 2020, and the kernel and application frameworks have been self-researched and developed. The scene will expand to PCs, watches, and cars.

The Mate Watch is expected to be the debut of the Harmony OS system in 2020 and is Huawei's first mobile device running Harmony OS.

Previously, Huawei filed a trademark application for "Mate Watch", which means that Huawei has put the Mate series of smartwatches on the agenda.

At present, Huawei's main watch products for the WatchGT series sports health attributes more powerful. The positioning of the Mate Watch is mainly for business people.

According to IDC, Huawei holds a major share of the wearable device market and continues to grow rapidly, with a growth rate of 62.2%.

In terms of the smartwatch (including smartwatches and light smartwatches) market, Huawei ranked second, with shipments of 2.6 million units, a year-on-year growth of 118.5%, is the only smartwatch brand among all manufacturers with a growth rate of more than 100%.

Everbright Securities believes that although Huawei suffered troubles from the U.S. , but the recent supply of core components is basically guaranteed, Mate 40 series, Mate Watch listing is basically unaffected.