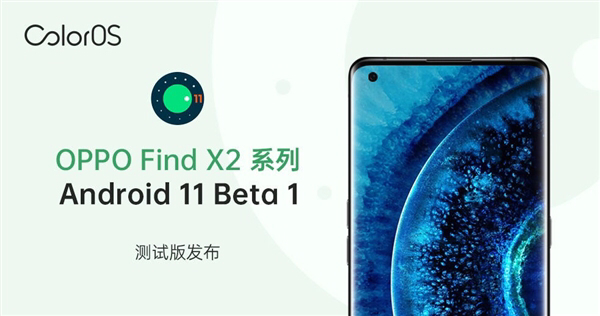 As previously teased, OPPO today announced that the ColorOS beta for the Find X2 series based on Android 11 Beta 1 is released.

Developers and earlier testers are available through the OPPO Open Platform.

On June 11, after Google released the first Beta version of Android 11, the ColorOS team said Android 11 Beta 1 will soon be available to OPPO Find X2 series.

ColorOS based on Android 11 will allow users to set when to turn the dark mode on and off. The system can also switch automatically based on sunrise and sunset.

The system privacy mechanism will be more stringent, and when the app needs to request microphone, camera and location permissions, users will be able to select the " One time only" option.

In terms of IoT, ColorOS will have a built-in device control switch, allowing users to control multiple devices in one hand.

In addition, the restriction between system apps will be broken, so that important contacts will be shown first and messages can be sent directly to the notification bar. Reply.

It should be noted that for system stability reasons, ColorOS has not integrated all the highlight features in this version. Gradual addition through subsequent iterations.

At last year's Google I/O developer conference, OPPO was among the first in China to adapt to the Android 10.

It should be emphasized that this version is a developer beta and is not recommended for general users to download for daily use.