For Android users, Genshin Impact was previously distributed only on TapTap, Bilibili, Google Play and the official website. Recently it has quietly hit the Xiaomi App Store. 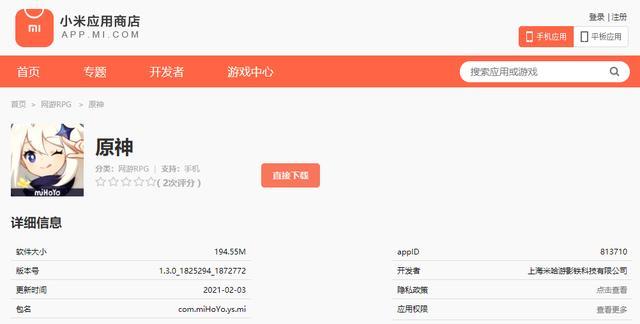 This is also the first time Genshin Impact has been distributed through the channels of Chinese Android phone makers.

Before Genshin Impact's official global release at the end of September 2020, it had negotiated with major Android stores in China about the share ratio. miHoYo wanted a 7:3 share, but the Android phone makers did not agree at that time.

Then miHoYo said that it would not be distributed in Chinese Android application stores.

But to the surprise of players and cell phone makers, Genshin Impact swept the global market after its release, with a monthly revenue of over RMB 1 billion.

It has achieved the number one global revenue several times and was selected by Apple as the 2020 Global Handheld Game of the Year, a performance that has renewed cell phone manufacturer channels' hopes for a piece of the pie.

With Genshin Impact's popularity currently on the decline, miHoYo must focus on the domestic market if it wants the game to maintain its popularity and revenue.

Currently, in the domestic game market, developers and channels will split on a 5:5 basis, while platforms such as the Apple App Store and Google Play both use a 3:7 split (developers take 70%).

According to GameLook, the split ratio between miHoYo and Xiaomi App Store is 7:3. miHoYo can get 70% revenue share of the game, which is the first case in China.