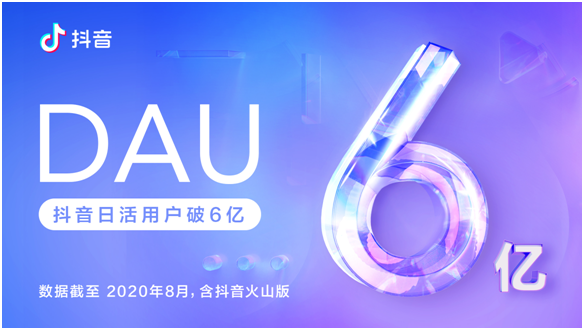 Douyin, the Chinese version of TikTok, has more than 600 million daily active users as of August 2020, ByteDance CEO Zhang Nan said at the second annual Douyin Creators Conference in Shanghai on September 15.

Over the past year, more than 22 million people have earned revenue on Douyin, with total revenue of more than 41.7 billion yuan, Zhang Nan said, adding that Douyin hopes to double that number in the coming year, allowing creators to gain 80 billion yuan in revenue.

As for new features and services such as e-commerce in live streaming, Zhang Nan said that any new features Douyin launches will be based on the value to users and the society, rather than just pursuing data growth.

Douyin market head Shi Qiong said, in the next year, Douyin will invest 10 billion yuan worth of traffic resources, through traffic support upgrades, service means to improve, expand the realization channel, to help creators in Douyin to earn 80 billion yuan.

Last year, Douyin's "creator growth plan" set the goal of getting at least 10 million creators to earn income in Douyin, and this goal has been exceeded.

To date, 22 million creators have generated 41.7 billion yuan in revenue on Douyin. The program has set even higher goals and aims to benefit even more creators.