As the Huawei Mate40 gets closer to launch, more information is starting to come out.

An image posted by Weibo user @数码疯报 on Saturday shows a poster for the Huawei Mate40 that reads "HUAWEI Mate 40 is coming, On sale in October 2020". 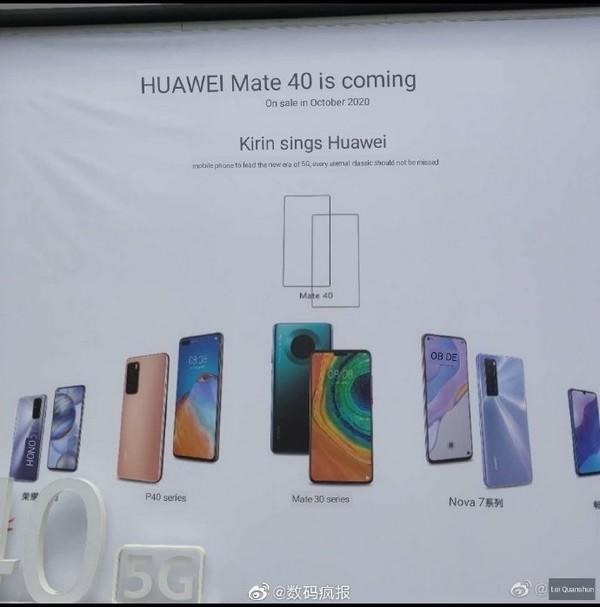 Recently Huawei consumer business CEO Richard Yu said that because of the ban in the United States, the Kirin 9000 chip can only be produced until September 15.

After that, Huawei chip foundry TSMC and other factories will no longer be allowed to have business with Huawei.

So the Kirin 9000 that Huawei's Mate 40 series will feature could be the last of Huawei's high-end chips.

On Saturday, it was reported that the Kirin 9000 chip is stocked at around 10 million pieces, which will meet Huawei's needs for about half a year.

Previous leaks have shown that Huawei's Mate 40 series, which includes the Mate 40, Mate 40 Pro, and Mate 40 Pro+, all feature a curved screen design, with the latter two having a bit more screen curvature and dual speakers.

The Huawei Mate 40 series still feature a circular camera design similar to that of the Mate 30 series.