As Tesla's Shanghai factory enters the advanced stages of construction for its Phase 2 project, the building where the Model Y will be produced has also seen some important internal upgrades.

The number of cargo trucks heading to Tesla's Shanghai factory has increased dramatically, and more importantly, they've been loaded with new equipment. 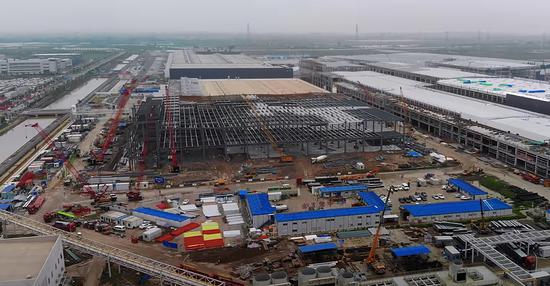 A drone operator by the name of Jason Yang recorded the latest video and showed an update on the progress of Tesla's Shanghai factory Phase 2 via YouTube.

The video, taken by the Tesla fan, shows that the roof is being waterproofed and that it will take about a month before the factory's exterior walls are completely sealed.

Interestingly, an employee at the Tesla factory in Shanghai claims that there have been a lot more trucks coming in and out of the factory lately and that they are loaded with vehicle production equipment.

Tesla hasn't officially revealed the reason for the increase in cargo trucks, but it's most likely due to the fact that construction of the facility, which will be responsible for the future production of the Model Y electric SUV, is coming to an end.

When the Model 3 factory was being built last year, this was the same phase in which Tesla installed production equipment in the Phase 1 area.

It probably won't be long before the robots and other equipment used to make the vehicles are installed in the Phase 2 area of Tesla's Shanghai factory.

And if it's fast enough, Tesla could even start pre-producing the Model Y, an all-electric SUV, within the year.

The previous outbreak of the new coronavirus pneumonia has had some impact on the construction of Tesla's new plant.

If Tesla can begin production of the Model Y this year, the move would significantly accelerate the company's expansion in China.

After all, China is not only the world's largest consumer market for automobiles, but also for electric vehicles.

Tesla is under increasing competitive pressure in the Chinese market, and in addition to the traditional car companies that have started to launch electric cars, there are also many new local car-making powerhouses.

Since the Model Y is a crossover model that is more popular with Chinese consumers and Tesla's technology is superior to its competitors, the model is likely to be successful in China.

Tesla is expected to start delivering Model Y models in China starting next year, and if Tesla is able to complete the construction of the Model Y factory in the next few months, they will likely start delivering new vehicles in early 2021.