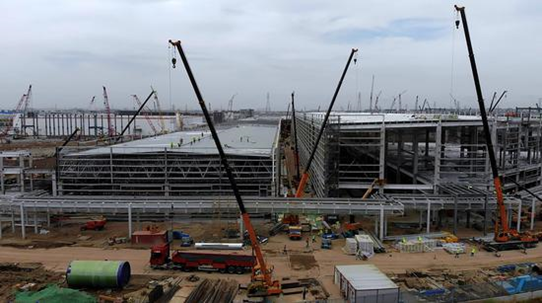 Aerial footage shows that part of the main building of the Tesla Gigafactory Phase II project in Shanghai's Lingang Industrial Zone has been completed and the project is about to enter its topping-out phase, according to Teslarati.

The Model Y is Tesla's fifth model and the second SUV product after the Tesla Model X.

Launched in Los Angeles on March 15, Beijing time, the new car comes in standard, long-range, dual-motor all-drive and performance versions with a starting price of $39,000 and deliveries will begin in March this year.

In January this year, Musk announced the start of the Made in China Model Y project, and four months later, the Model Y plant is about to be fully capped.

Previously, the Tesla Gigafactory Phase I, which was used to produce the Model 3, set a record for speed of completion and was built and put into production in just one year, and I wonder if the Gigafactory Phase II will break that record.

The Model Y is scheduled for production in China in 2020 with delivery in early 2021.

Given Tesla's experience with the Model 3 build, the Model Y build is now accelerating, and if the production equipment is in place in time, the China-made Model Y may be able to meet with Chinese consumers earlier this year.