Authored by Dollar Bill, via cnEVpost.

In mid-April, images circulated online showing a Tesla Cybertruck appearing on the streets of Shanghai immediately caused a stir among Tesla enthusiasts. 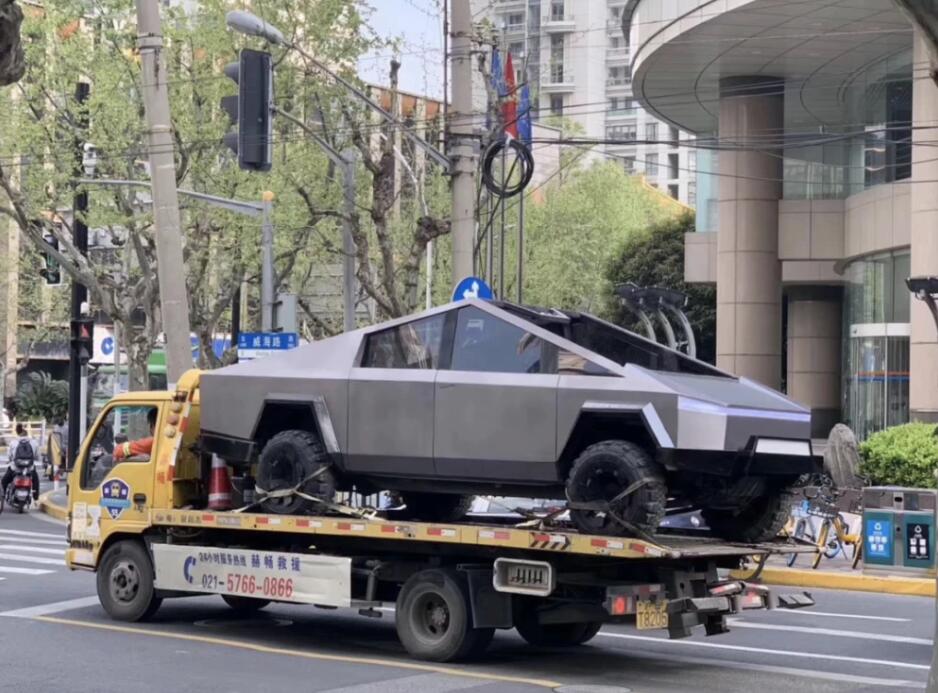 Image: Homemade "Cybertruck" on the streets of Shanghai (Source: Wang)

Since its release in late 2019, the number of pre-orders for the Tesla electric pickup Cybertruck has surpassed 600,000 units. But Tesla says deliveries will only begin in 2022.

Tesla CEO Musk has revealed that the site of the Cybertruck Gigafactory could be announced as early as May, with the exact news certain to be announced within three months.

In fact, the "Cybertruck" that roamed the streets of Shanghai was not built by Tesla, but by a domestic enthusiast.

On China's YouTube Bilibili, a young man from Northeastern China, who calls himself "Factory Owner Wang", has documented the entire process of the homemade Cybertruck.

The videos show processes from modeling and buying the raw materials, to hand welding all the steel tubes and plates, and finally spray painting. Today these videos have a combined total of over 350,000 views.

The dramatic scene is still to come, after the video went viral on Twitter to get Elon Musk's like.

Wang's Cybertruck isn't the first folklore homemade Cybertruck, and while this pickup's bizarre appearance can't be judged by conventional aesthetics, it's the unique exoskeleton structure and well-defined cutaway design that made many tuning enthusiasts around the world giddy after the launch.

Thus, soon after the Cybertruck was unveiled, homemade Cybertrucks of various sizes and a variety of curiosities were completed one after another.

A search on the video site YouTube with the keyword "Fake Cybertruck" will reveal dozens of homemade Cybertruck videos.

Some of these teams rely on relatively specialized equipment and craftsmanship to build cars that are as sophisticated as they are fake.

Cybertruck: a product of engineering-led design

Unlike other amateurs, Wang, the owner of this home-built Cybertruck in Shanghai, graduated from Coventry University with an MA in automotive.

It's not uncommon to find people who love cars, especially boys who have various dreams of building cars.

This dream is deeply rooted in Wang's heart, knowing that China's first automobile manufacturing plant is located in his northeastern hometown, which is also the main town of China's automobile industry.

Before building this Shanghai version of the Cybertruck, Wang completed the exterior design of a supercar on his own and built the car out of college.

He himself referred to the red sports car as a "Devilfish," but the car eventually reaped the title of a "Northeast Pagani" after the video hit the Internet. 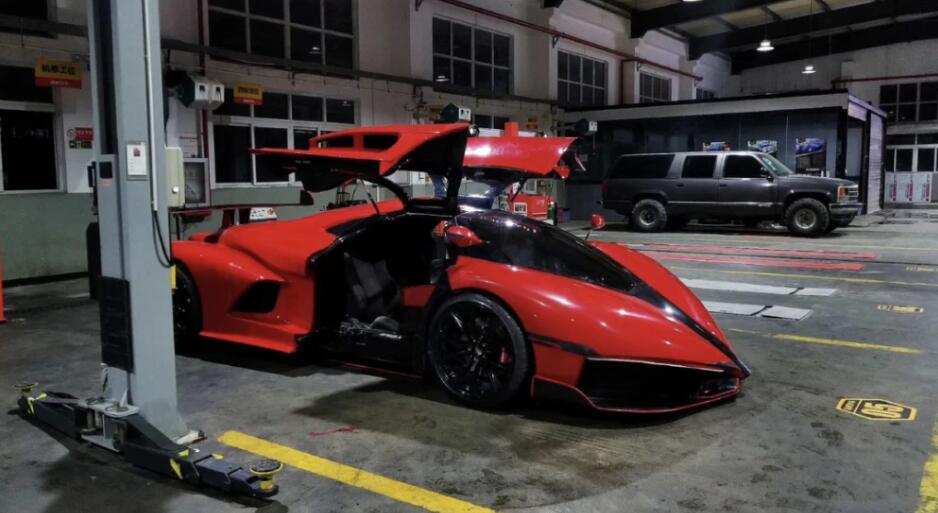 The popularity of "Northeast Pagani" has given Wang a taste of fun and sweetness, as well as the opportunity to build his own car. That was the impetus for his later creation of "Cybertruck."

He told DeepTech that Tesla Cybertruck's design is a disruptive presence for automotive designers, and that such a quirky design is unlikely to be put into production at any traditional host plant.

The reason behind this is that Cybertruck's appearance is the result of engineering-led design. "He didn't mean to cause it, but rather belonged to a product of engineering and design compromising each other."

"The normal production cars on the market are invariably design-led projects, but Cybertruck is just the opposite." Wang said the bodies of conventional cars require stamping, and their steel plate thicknesses, while different, are around 0.8 mm.

"It's because the steel plates are too hard to make a normal car look like." With an engineering-led mindset, Cybertruck ended up with a faceted, angular look with no curved surfaces, but rather all of it.

Whether for engineering or design reasons, the Cybertruck went against the grain and used regular steel plates for the look of the entire car, sparking enthusiasm from all Tesla fans, including Wang, at the time of release.

After that, the seemingly easy-to-handle "steel plate combo" also kicked off a makeover frenzy for depth enthusiasts.

How to build your own Cybertruck

For Wang, it seemed like a natural thing to start doing Cybertruck.

He told DeepTech, "We thought it was kinda fun to make, and it should be seen." And so things began.

Since the Tesla Cybertruck was released with very limited online information, the first step in building the car was to build the model on its own, based on the only pictures and images available. 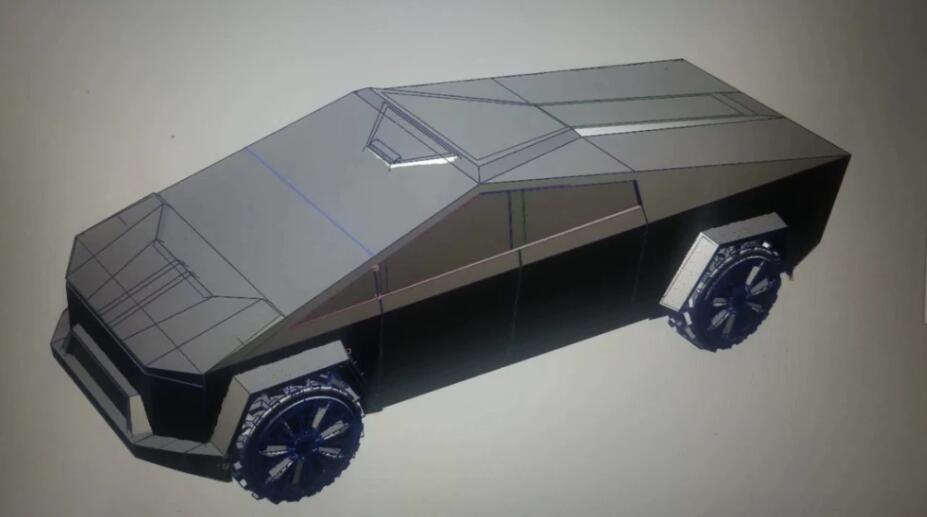 In a later video, Wang explains that the original car was not overhauled during modeling, out of concern for not destroying the design language of the original car. "The sides are still dominated by trapezoids and triangles, and the main change is in the front face."

This includes some changes to the front hood and front bar and the addition of LED searchlights.

One of Wang's most notable modifications during the design phase was the addition of a third row of seats to the base of the original car.

Normally, the back half of the pickup serves as a rear bucket for storage with a visor, and in the modified version of the Wang, when the third row of seats stands up and the top visor opens, it becomes an open-top pickup.

Wang's description of the Cybertruck's highly recognizable bodywork, on the other hand, demonstrates his creativity as a vehicle designer and adds his own understanding to this. 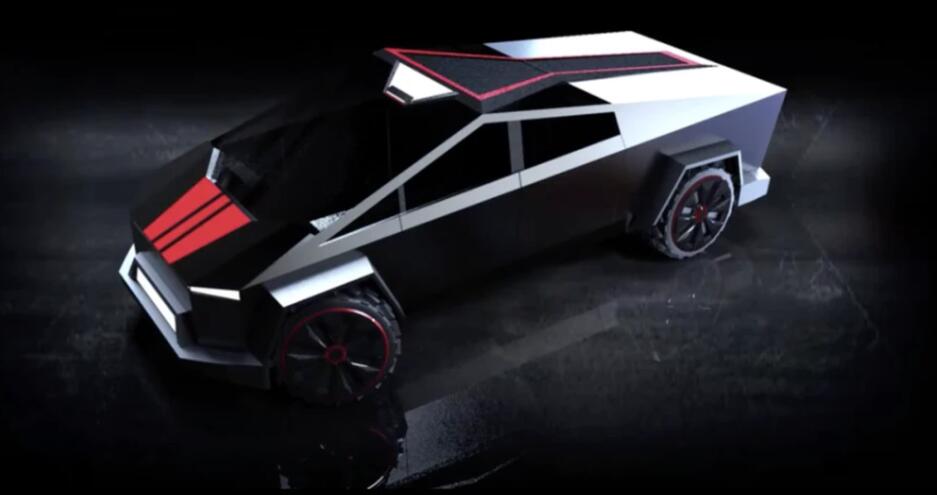 Step 2: The hands-on phase comes when the modeling is complete.

As you can tell from the official Cybertruck promo, this is a very long car, and that's what makes this pickup so imposing.

For a similar purpose, Wang brought in a beat-up Chevrolet Suburban to use as a chassis for the conversion.

In the United States, the Suburban was the standard car for field agents and was so powerful that even President George W. Bush's motorcade chose to have it modified.

The Suburban is also very similar in size to the Cyebertruck, so Wang removed the body covering all while keeping the car's big beam. 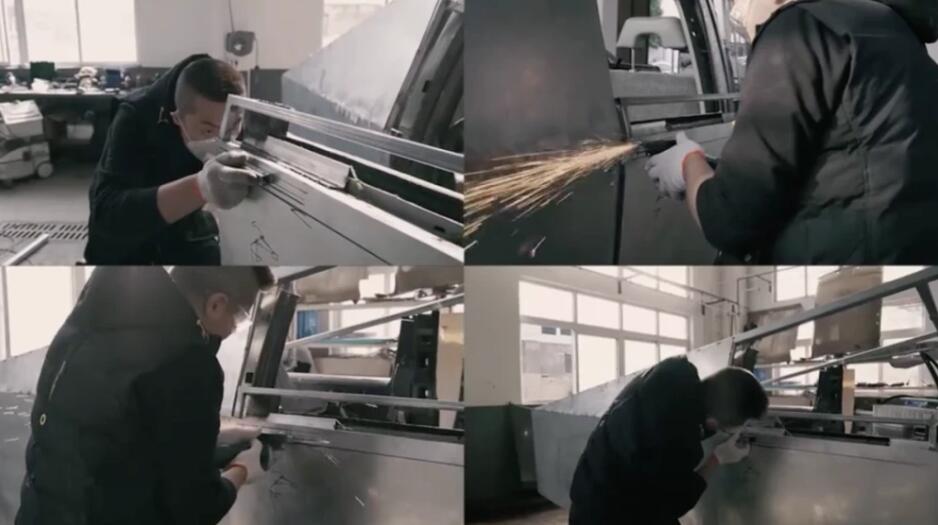 The Cybertruck's angular exoskeleton design makes it easier for many enthusiasts to get their hands on.

The Cybertruck is made of 3 mm thick stainless steel sheet, bent in one piece, but this process requires more specialized equipment.

And for enthusiasts like Wang, they don't really need to use a single piece of steel for the bending process, but rather use steel tubes + pieces of steel in the raw material, welded together according to the modeling, to achieve an approximate look without overly complicated processing.

Wang introduces in the video that Cybertruck looks past the angles from the side and frames them directly with steel pipe.

Of course, this also requires very fine work, especially the triangular shape of the upper part of the Cybertruck is very important, and in Wang's opinion, the proportions of the triangle are very important, otherwise the car will be built as a "four".

After the steel plate is welded on, a "cottage-looking" Cybertruck gradually takes shape.

While the angular, all-line appearance looks relatively easy to achieve, welding these steel pipe supports was also one of the difficult points, Wang said.

Because the body is nearly 6 meters long, it needs to be ensured that the steel pipe from the front to the rear of the car is above a level surface.

Where there is a steel pipe protruding from the middle, the final steel plate may not be covered. So what seems like a simple plane, is not so easy to achieve.

When largely finished, it's the added detailing that gives this "cottage car" its soul.

For example, based on his knowledge of the vehicle, Wang was even able to re-implement the auto-lift window on the car when he was modifying it and replaced it with a frameless window that Tesla has uniformly pursued in all models. 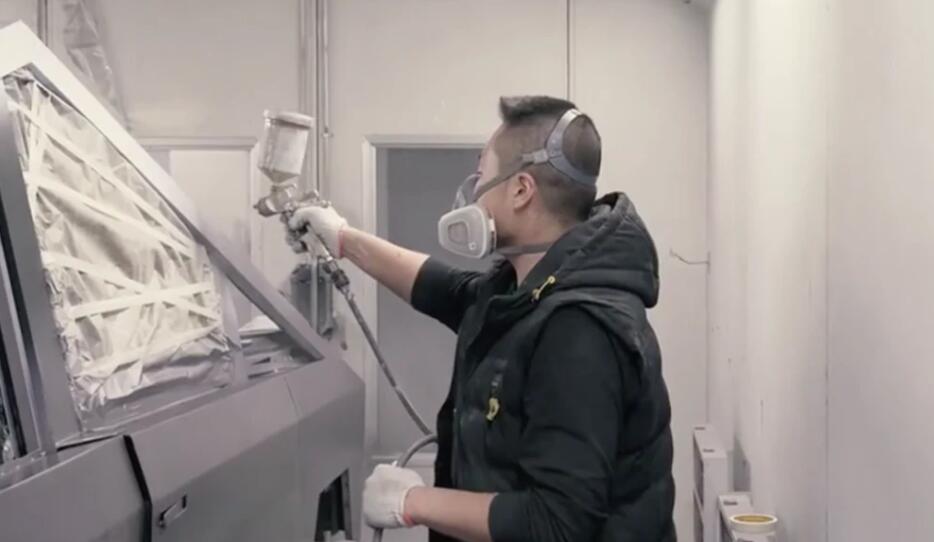 For the exterior, Wang used metallic and red paint on top of metallic nude to match the original car's color, while choosing a matte finish that is closer to the original car, as opposed to the usual glossy exterior.

This practice gives this car a matte, frosted texture.

After the custom tempered glass is covered at the window and front gear locations, the final thing is the lights. The LED light source was applied to the front of the car, covered with white plastic sheeting, and the penetrating headlights were done.

In a similar way, the highly recognizable red taillights at the rear of the car were completed without incident. 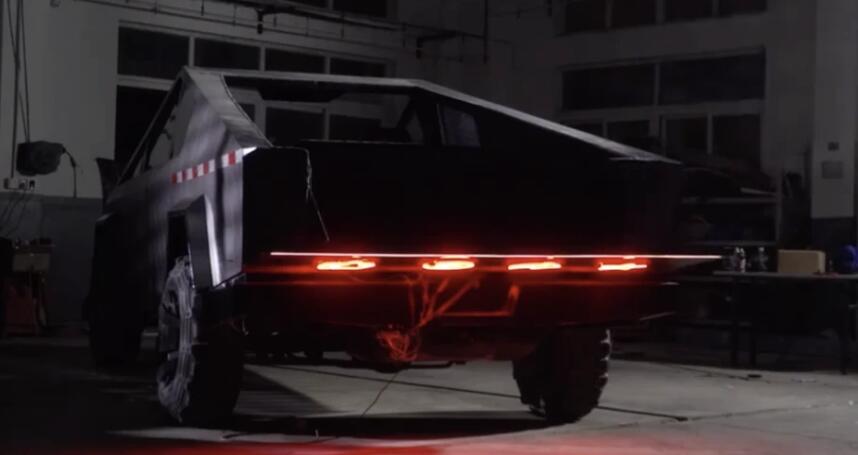 When the lights come on, the handmade Cybertruck instantly has a soul, and in dimly lit conditions, it can also show off a cyberpunk sense of authenticity.

Still, the fuel car's exclusive engine roar is revealed after the vehicle starts, and this handmade Cybertruck doesn't have the "pure blood" from Tesla. 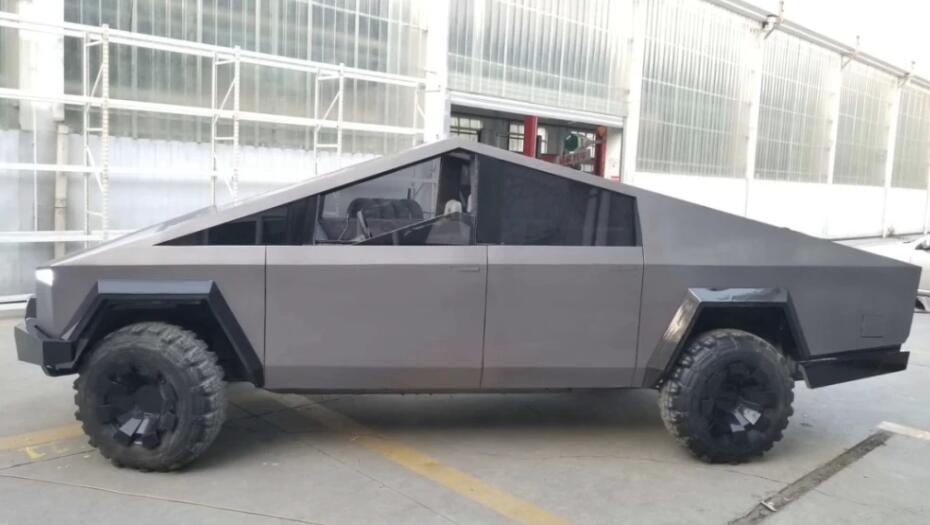