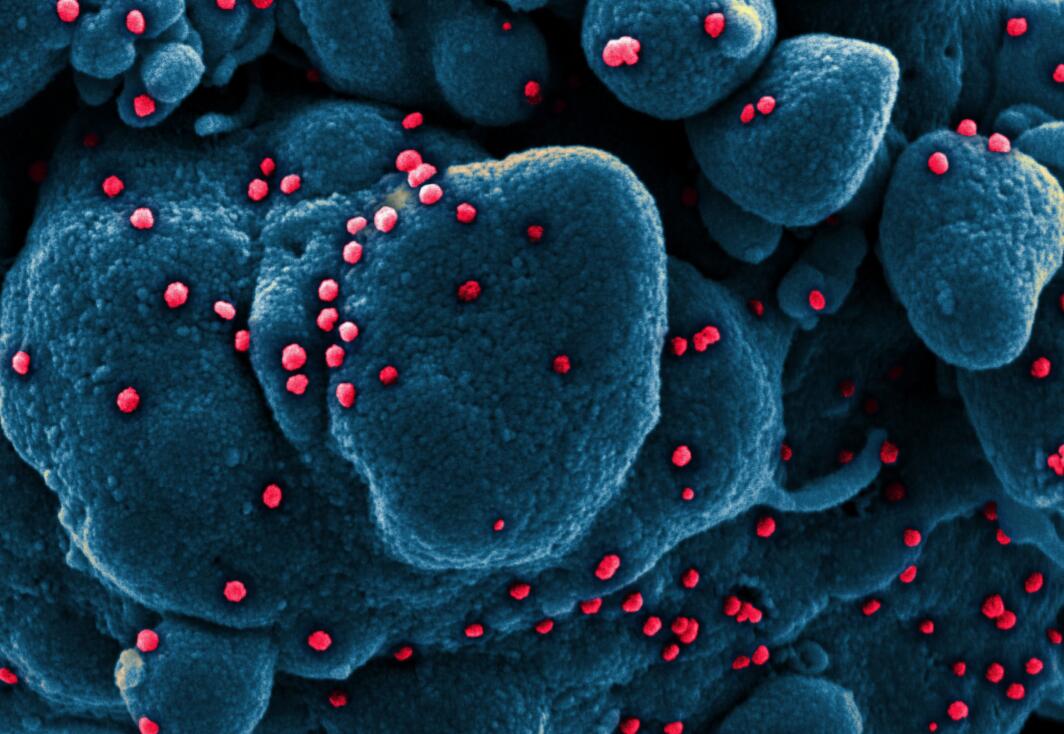 The coronavirus pandemic is likely to last as long as two years and won't be controlled until about two-thirds of the world's population is immune, a group of experts said in a report.

Because of its ability to spread from people who don't appear to be ill, the virus may be harder to control than influenza, the cause of most pandemics in recent history, according to the report from the Center for Infectious Disease Research and Policy at the University of Minnesota.

People may actually be at their most infectious before symptoms appear, according to the report.

After locking down billions of people around the world to minimize its spread through countries, governments are now cautiously allowing businesses and public places to reopen. Yet the coronavirus pandemic is likely to continue in waves that could last beyond 2022, the authors said.

"Risk communication messaging from government officials should incorporate the concept that this pandemic will not be over soon," they said, "and that people need to be prepared for possible periodic resurgences of disease over the next two years."

Developers are rushing to make vaccines that may be available in small quantities as early as this year.

While large amounts of vaccine against the 2009-2010 flu pandemic didn't become available until after the outbreak peaked in the U.S., one study has estimated that the shots prevented as many as 1.5 million cases and 500 deaths in that country alone, the report said.

Even though coronaviruses are very different from influenza viruses, the COVID-19 pandemic and pandemic influenza share several important similarities.

First, SARS-CoV-2 and a pandemic influenza virus are novel viral pathogens to which the global population has little to no pre-existing immunity, thereby resulting in worldwide susceptibility.

Second, SARSCoV-2 and influenza viruses are predominantly spread via the respiratory route by large droplets, but also with a significant component of transmission by smaller aerosols.

Asymptomatic transmission occurs with both viruses as well, thereby contributing to the spread of each. Finally, both types of viruses are capable of infecting millions of people and moving rapidly around the globe.

There are also important differences.

The longer incubation period for COVID-19 allowed the virus to move silently in different populations before being detected (Kahn 2020, Li 2020).

This contributed to an initial environment of complacency before national governments became aware of the severity of the situation.

Thus, while both viruses can lead to asymptomatic infections, the asymptomatic fraction appears to be somewhat higher for COVID-19 than for influenza.

Another consideration is the timeframe of presymptomatic viral shedding for people who fall ill.

One recent study found that the SARS-CoV-2 viral load was highest at the time of symptom onset, suggesting that viral shedding may peak before symptoms occur, leading to substantial presymptomatic transmission (He 2020).

A point-prevalence study of SARS-CoV-2 in nursing home residents showed that, for 27 residents who were asymptomatic at the time of testing, 24 developed symptoms a median of 4 days later (interquartile range, 3 to 5 days) (Arons 2020), supporting the potential for several days of presymptomatic shedding.

All of the above factors contribute to viral transmissibility.

One way to quantify the transmissibility of a virus is to determine the basic reproductive number (R0) for that virus.

The R0 is the average number of new infections that result from a single infected person in a wholly susceptible population (Delamater 2019).

The R0 can vary by factors that influence the contact rate between people, such as physical distancing strategies and lockdowns aimed at driving the R0 below 1.

An R0 below 1 indicates that that an outbreak is shrinking rather than expanding, since each infected person is subsequently infecting less than 1 other person.

While the R0 is not influenced by herd immunity (which is the proportion of the population that is immune to a virus), either generated by natural infection or by vaccination, immunity in the population can influence the effective reproductive number (RE), which is similar to the R0 but does not depend on having a fully susceptible population (Delamater 2019).

Immunity in the population can effectively diminish or end an outbreak by driving RE below 1 (Fine 2011).

The R0 for SARS-CoV-2 during the early course of the pandemic in China was estimated at 2.0 to 2.5 (Anderson 2020); however, the R0 for SARS-CoV-2 is difficult to accurately determine in various geographic regions because of challenges in identifying and testing infected persons, and one study has suggested that the value may be considerably higher (Sanche 2020).

Also, for SARS-CoV-2, the R0 is not the same for each person; it can change based on natural variability in viral shedding by infected persons. Even the average value of R0 is not a purely biological quantity—it depends on behavior and contacts.

For example, some have speculated that the R0 for SARS-CoV-2 may be higher in areas of denser population or more frequent contacts, such as large cities.

In addition, some evidence indicates that some people are "super-spreaders," as was seen with MERS-CoV and SARS (Frieden 2020, Wong 2015).

Some countries appear to have been able to drive their R0 for SARS-CoV-2 below 1 with mitigation measures, although as the mitigation measures are lifted, the R0 in any given area may creep back above 1, leading to disease resurgence over time.

The R0 for pandemic influenza has varied by pandemic, but estimates have consistently been around or below 2, suggesting that even past severe influenza pandemic viruses have been less transmissible than SARS-CoV-2.

A review article published after the 2009-10 pandemic examined a range of studies reporting R0 values for the last four influenza pandemics.

Key Lessons From Past Influenza Pandemics

Of eight major pandemics that have occurred since the early 1700s, no clear seasonal pattern emerged for most.

Two started in winter in the Northern Hemisphere, three in the spring, one in the summer, and two in the fall (Saunders-Hastings 2016).

Seven had an early peak that disappeared over the course of a few months without significant human intervention.

Subsequently, each of those seven had a second substantial peak approximately 6 months afterfirst peak.

Some pandemics showed smaller waves of cases over the course of 2 years after the initial wave.

The only pandemic that followed a more traditional influenza-like seasonal pattern was the 1968 pandemic, which began with a late fall/winter wave in the Northern Hemisphere followed by a second wave the next winter (Viboud 2005).

In some areas, particularly in Europe, pandemic-associated mortality was higher the second year.

The course of these pandemics was not substantially influenced by a vaccination campaign, except for the 2009- 10 pandemic, during which vaccine initially became available in the United States about 6 months after the onset of the pandemic, although substantial quantities of vaccine were not available until after the pandemic had peaked in most parts of the country.

Following the 2009-10 pandemic, the pandemic influenza A H1N1 strain has been co-circulating seasonally along with influenza A H3N2.

Key points from observing the epidemiology of past influenza pandemics that may provide insight into the COVID-19 pandemic include the following.

First, the length of the pandemic will likely be 18 to 24 months, as herd immunity gradually develops in the human population.

This will take time, since limited serosurveillance data available to date suggest that a relatively small fraction of the population has been infected and infection rates likely vary substantially by geographic area.

Given the transmissibility of SARS-CoV-2, 60% to 70% of the population may need to be immune to reach a critical threshold of herd immunity to halt the pandemic (Kwok 2020).

This may be complicated by the fact that we don't yet know the duration of immunity to natural SARS-CoV-2 infection (it could be as short as a few months or as long as several years).

Based on seasonal coronaviruses, we can anticipate that even if immunity declines after exposure, there may still be some protection against disease severity and reduced contagiousness, but this remains to be assessed for SARS-CoV-2.

The course of the pandemic also could be influenced by a vaccine; however, a vaccine will likely not be available until at least sometime in 2021.

And we don't know what kinds of challenges could arise during vaccine development that could delay the timeline.

Second, there are several different scenarios for the future of the COVID-19 pandemic, and some of these are consistent with what occurred during past influenza pandemics.

These can be summarized as follows and are illustrated in the figure below. 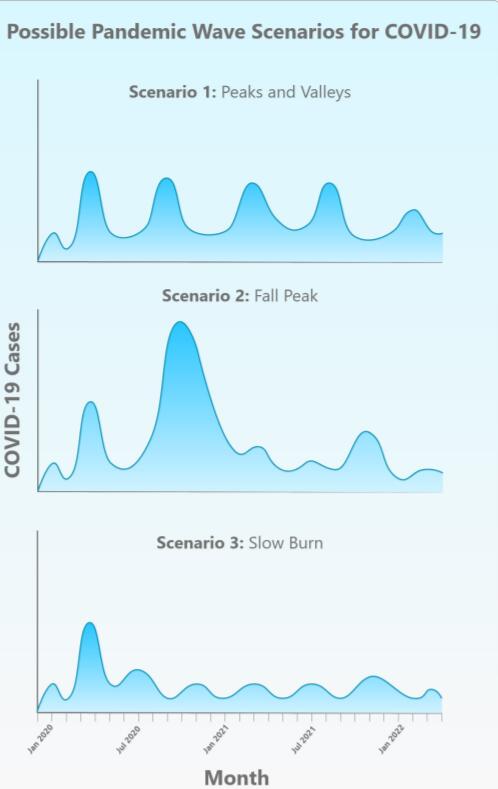 Scenario 1: The first wave of COVID-19 in spring 2020 is followed by a series of repetitive smaller waves that occur through the summer and then consistently over a 1- to 2-year period, gradually diminishing sometime in 2021.

The occurrence of these waves may vary geographically and may depend on what mitigation measures are in place and how they are eased. Depending on the height of the wave peaks, this scenario could require periodic reinstitution and subsequent relaxation of mitigation measures over the next 1 to 2 years.

This pattern will require the reinstitution of mitigation measures in the fall in an attempt to drive down spread of infection and prevent healthcare systems from being overwhelmed. This pattern is similar to what was seen with the 1918-19 pandemic (CDC 2018).

During that pandemic, a small wave began in March 1918 and subsided during the summer months. A much larger peak then occurred in the fall of 1918.

A third peak occurred during the winter and spring of 1919; that wave subsided in the summer of 1919, signaling the end of the pandemic. The 1957-58 pandemic followed a similar pattern, with a smaller spring wave followed by a much larger fall wave (Saunders-Hastings 2016).

Scenario 3: The first wave of COVID-19 in spring 2020 is followed by a "slow burn" of ongoing transmission and case occurrence, but without a clear wave pattern.

Again, this pattern may vary somewhat geographically and may be influenced by the degree of mitigation measures in place in various areas. While this third pattern was not seen with past influenza pandemics, it remains a possibility for COVID-19.

This third scenario likely would not require the reinstitution of mitigation measures, although cases and deaths will continue to occur Whichever scenario the pandemic follows (assuming at least some level of ongoing mitigation measures), we must be prepared for at least another 18 to 24 months of significant COVID-19 activity, with hot spots popping up periodically in diverse geographic areas.

As the pandemic wanes, it is likely that SARS-CoV-2 will continue to circulate in the human population and will synchronize to a seasonal pattern with diminished severity over time, as with other less pathogenic coronaviruses, such as the betacoronaviruses OC43 and HKU1, (Kissler 2020) and past pandemic influenza viruses have done.