Can iPads replace computers? As the iPad becomes more powerful, this has aroused the interest of many people.

And Apple itself has helped in this direction. In recent years, not only has the new iPad Pro product line been built, but the iPad system has been renamed to iPadOS, which is different from iOS.

The iPadOS has better support for the mouse touchpad, and Apple has also released productivity accessories such as the wonderful keyboard.

Apple also said, "Your next computer is not a computer." 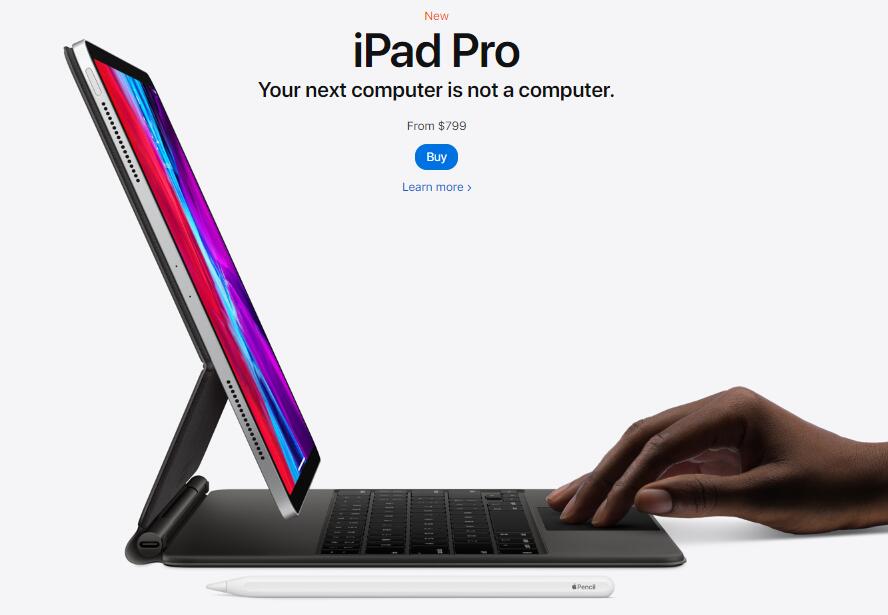 So does the iPad really have the productivity of a comparable PC now? Fortunately, in terms of hardware, Apple already has a strong hardware design capability, and the iPad hardware form can be changed at any time;

The key point is the iPadOS, the soul of the iPad. For the operating system to be productive, it requires not only a reasonable design but also year-round ecological precipitation.

iPadOS is almost one year old, is it really productive? Let's discuss this topic today.

iPadOS: Is it really productive?

When the iPad Pro was born, many people specifically used the iPad Pro to handle their daily work, to test whether the iPad can meet productivity needs.

The advent of iPadOS has further promoted this trend. But did everyone's experiment succeed? At least the author's personal experience, iPadOS is still not enough to give up PC.

The system mechanism is not productive.

Despite the name change of iPadOS, its system mechanism is still in line with iOS, making it difficult for many productivity occasions.

For example, the APP is too easy to be forcibly interrupted by the system. The working APP is placed in the background, open the browser to check the information, open a few more web pages, and come back to find that the APP was actually killed by the system, and the work progress cannot be resumed normally. Basically, it will not happen in a serious PC (the limit of using memory to OOM will be discussed separately).

At the same time, the multi-window mechanism of iPadOS is not perfect, and only two apps can be displayed on the same screen.

Although some productivity software such as PS has released the iPad version, it is still difficult for you to use the application on iPadOS for software development, project management, engineering design and so on.

Compared with the desktop version, the new arrival productivity software also has a lack of functions. For example, the PS on the iPad will even lack a lot of key features such as filters, custom brushes, and layer styles.

The PS update complemented some of the features (but still far from enough).

And iPadOS has also appeared a useful video-cutting app like LumaFusion, which is indeed more productive than the iPhone. But in the foreseeable future, the software application on iPadOS is still impossible to compete with PC in the field of productivity.

Ecological adaptation is not productive.

In order to make the iPad more productive, Apple specially created a new keyboard and designed a set of mouse touchpad gestures in line with macOS.

However, can this make the iPad into a notebook form and increase productivity? Does not.

On iPadOS, if you want to simulate the use of a notebook, the most common problem is the adaptation of the APP.

Connect the keyboard, use the horizontal screen after laying down the iPad, and open an APP. This APP must be used in a vertical screen. You have to turn the screen back again. This experience is the daily life of iPad users.

Even the APP can't adapt to the horizontal screen. There is only a keyboard. How about a laptop?

Peripheral compatibility is not productive.

In fact, compared to before, iPad has made a lot of progress in this regard. In terms of hardware, the iPad Pro uses a more universal USB Tpye-C interface;

In terms of software, the Bluetooth matching of iPadOS is more open, and you can use Bluetooth to connect more wireless devices.

Thanks to this, the mouse, gamepad and other devices have been better compatible in the iPad, but this is still far from enough.

iPadOS currently compatible peripherals, the type is still limited. A productive operating system must consider the compatibility of various devices.

The iPadOS needs to make up for productivity, not only the ones mentioned above, but also the file management system, task management, and many other aspects. I will not list them one by one due to space limitations.

What can iPadOS do now?

Of course, iPadOS is not useless in terms of productivity, it is indeed a very good tool for specific jobs.

iPadOS has an excellent color management system, and with Apple Pencil, it can be comparable to a professional tablet to a certain extent;

There are many excellent readers and note-taking apps on iPadOS, which are very good for document reading and batch reading;

With the iPad, in many cases you don't have to use paper.

Simple audio and video clips. iPadOS has a built-in more efficient decoder, and it can also correctly convert audio sampling rate and other parameters. With the corresponding APP, it can do some light audio and video editing work.

Although iPadOS still fails to meet the heavy productivity task, but since Apple has played the card of productivity, iPadOS will certainly not stop there.

iPadOS has just separated from iOS, and through some signs, it is not difficult to find Apple's high expectations for it. In the future, the posture of iPadOS may be very different from today.

Will iPadOS be reborn in the future?

iPadOS was born out of iOS, but its usage scene is very different from the past.

Compared with the past, iPadOS puts more emphasis on the use of the keyboard. At the same time, Apple has also made a series of changes. IPadOS is expected to usher in a change in the future.

This is a point that ordinary users rarely pay attention to. At the WWDC conference in 2019, Apple launched SwiftUI and Mac Catalyst, which made it possible for iPadOS and macOS software applications to be shared.

If you have an Apple N suite, you should know that their software applications have been separate for a long time.

Although the iPhone and iPad are both iOS, APP is divided into the iPhone version and iPad version (iPad version generally has HD logo), and macOS software purchase channels are different from iOS.

With the advent of SwiftUI and Mac Catalyst, the barrier between them is being broken.

The role of SwiftUI is that developers can use relatively simple code to develop a software UI that adapts to multiple platforms at once.

In fact, SwiftUI can also open up more Apple platform UI, such as tvOS, macOS.

It's just that SwiftUI, as a new thing, hasn't reached the point of influence, but the future is worth looking forward to.

Let's talk about Mac Catalyst. If SwiftUI benefits all Apple platforms, then Mac Catalyst is unique to iPadOS and macOS.

From a certain perspective, Mac Catalyst will be the new development benchmark for iPadOS and macOS, and iPadOS will be deeply integrated with the application ecosystem of macOS.

Mac Catalyst will become the bridge for migrating macOS to ARM. In the future, iPadOS and macOS will share the ecology to a great extent, and iPad will become another form of MacBook.

Apple not only laid out multi-platform development in technology, but also made efforts in operation.

Last month, Apple announced the launch of Universal Purchase. Users only need to purchase one time to purchase different versions of the same APP on iOS, iPadOS, macOS, and tvOS.

Obviously, SwiftUI and Mac Catalyst have laid the foundation for cross-platform development, while Universal Purchase has made a powerful addition to the operation.

The new Xcode 11.4 has just been launched soon. According to the latest news, Apple is working hard to bring Xcode to the iPadOS platform, and you can also tap the code with the iPad! This undoubtedly once again confirmed Apple's determination to cross-platform.

In short, although iPadOS does not have too high productivity now, Apple is using a cross-platform strategy to make it slowly start sharing ecology with macOS.

In the future, the upper limit of iPadOS can be expected, and it can even develop into another form of Mac; and even if the development is not as expected, it can also carry some of the functions of Mac, which is more productive than it is now.

Is iPadOS productive enough? For now, it is still only capable of a small number of specific tasks such as drawing and recording. "Productivity before buying, iQiyi after buying" is still the status quo of many iPad users.

However, Apple is making iPadOS more like a desktop-level system through cross-platform strategies and changes in other system mechanisms.

However, at the same time, we must also realize that this road is not easy to take. Cross-platform is not a new thing in the industry, this road is covered with the footprints of the pioneers, and it is also full of pits that the pioneers have stepped on.

Microsoft Windows and Surface software and hardware work together to play cross-platform. Today, the interaction of Windows is still unsatisfactory, the UWP ecosystem is half dead, and the shape of Surface is still unstable.

Apple, which focuses on the ultimate interactive experience, has brought very good touch and mouse operation compatibility on the iPad. Will Apple go better than Microsoft on the cross-platform road in the future? This needs to be watched.

Although Apple has a great say in its own ecology, at present, some of Apple's initiatives have not been promoted.

The iPad has always been less concerned by developers than the iPhone. How can developers be encouraged to contribute to the iPadOS? This is a question worth studying.

In general, iPadOS has not yet shown high productivity.

For a specific group of people, the iPad is a good tool; but the iPad wants to be the “next computer” for more people, and there is still a long way to go.