The Strategy Analytics consumer insight team today released the latest research report "COVID-19: Changes in Consumer Actions, Attitudes, and Behaviors in China, the United Kingdom, and the United States." The report shows that almost every Chinese consumer believes that everything will return to normal within the next 12 months.

Consumers in the United States, the United Kingdom, and China have a high level of awareness of COVID-19, but some generation Z (18-24 years old) people have insufficient awareness of this.

More than half of the people think they have enough information about the virus, but they have different opinions about when everything will return to normal.

The United Kingdom and the United States are still trying to "level out the outbreak curve". Most consumers in both countries believe that it will take at least 3 months for everything to return to normal, and some consumers believe that they will never return to their previous state.

Almost every Chinese consumer interviewed believes that everything will return to normal within the next 12 months, and two-thirds of the respondents believe that they will recover quickly within the next 3 months.

Other findings of the report include:

· The number of people watching news, using the Internet and streaming video has increased dramatically, especially in China.

Joy Ganvik, Vice President of Strategy Analytics Consumer Insights Group, pointed out: "In these three countries, the most popular and preferred source of information is through watching TV and reading online news. Health agencies in various countries are leading in terms of information reliability, but from the information on social media is the least trustworthy. "

The epidemic has the greatest impact on people's travel/vacation, with two-thirds of Chinese and one-third of British and Americans cancelling or delaying travel.

In addition, about two-fifths of consumers in China have shelved some high spending, including the purchase of cars, new smartphones or new appliances, and many have temporarily shelved buying new computers, investing in the stock market and upgrading to 5G mobile services.

Due to the impact of the COVID-19 epidemic, one-fifth of consumers in the United States and the United Kingdom have also shelved purchases of smartphones, cars, furniture, and appliances, as well as the purchase/upgrade of other technical products.

At the same time, the Strategy Analytics wireless smartphone strategy team also released a report based on a survey of 1,300 Chinese consumers from March 21 to 25-"Chinese Smartphone: Consumer Purchase Intention after the Covid-19 Epidemic."

The report pointed out that although the Chinese are more optimistic than consumers in the United States or Europe that everything can quickly return to normal, the rate of smartphone replacement and the popularity of 5G have undoubtedly slowed down. The main findings include:

· There is no doubt that Apple users are the most optimistic, with 41% intending to purchase new smartphone devices as planned or earlier than planned. 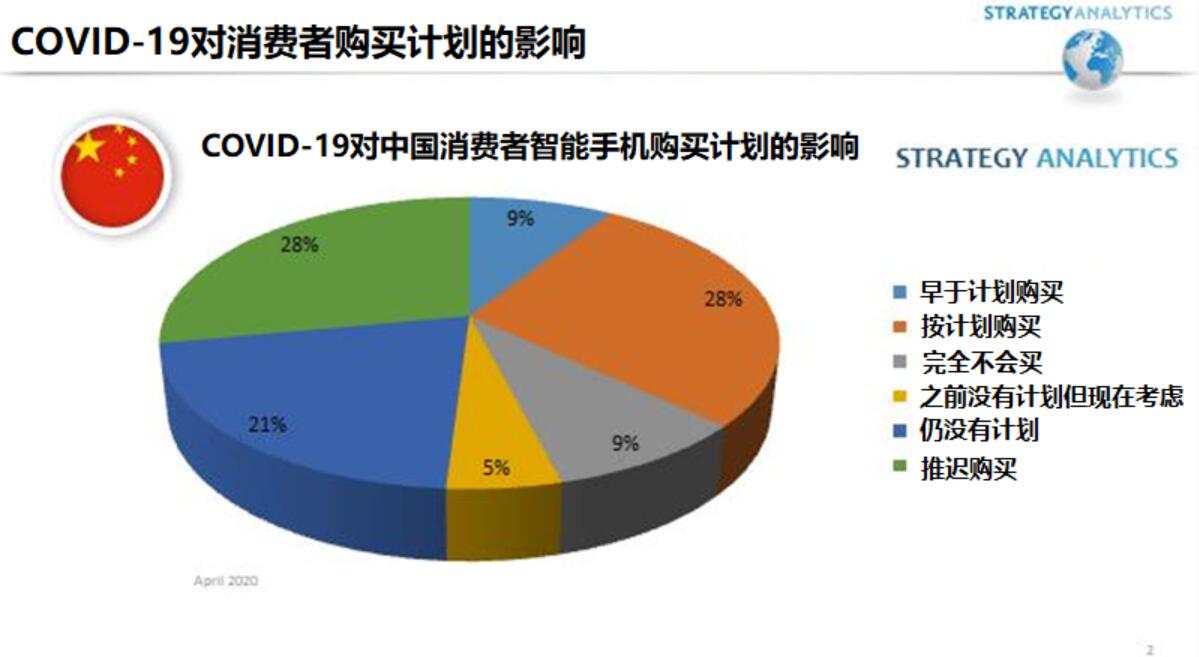 As we enter the second quarter of 2020, the supply chain and the complete ecosystem may be restored, but it is clear that a large part of consumers are not ready to return to their previous consumption patterns and purchase intention.

Operators, mobile phone manufacturers and retailers will have to redouble their efforts to convince hesitant smartphone users that new mobile phones and new 5G services are worth their expenditure relative to other priorities.