Tencent's R&D staff now accounts for 68% of its workforce

The secret to Tencent's success as one of the most profitable Chinese tech giants is a strong investment in R&D human resources.

Tencent's R&D workforce accounted for 68 percent of the company's total in 2020, up 16 percent from 2019, according to a report released by the Chinese social media and gaming giant on March 18.

The report revealed data on Tencent's R&D investment, R&D effectiveness, and open-source synergies in 2020. It showed that Tencent started more than 4,000 new R&D projects in 2020, up 22 percent year-on-year.

In 2020, each Tencent R&D employee had a code output of 32,000 lines on average, and 70% of technical leaders will continue to output code.

Since Tencent established its Technology Committee in 2018, open-source collaboration has become a keyword for Tencent at the technology development level. 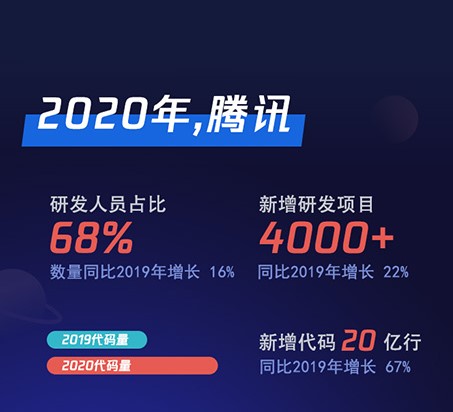