GAC NIOannounced on Weibo today that it will accept Bitcoin payments for car purchases, the first of its kind in China.

However, the company quickly changed the wording of "Bitcoin" to "digital currency. It said it became the first car company in China to accept digital currency for car purchases. 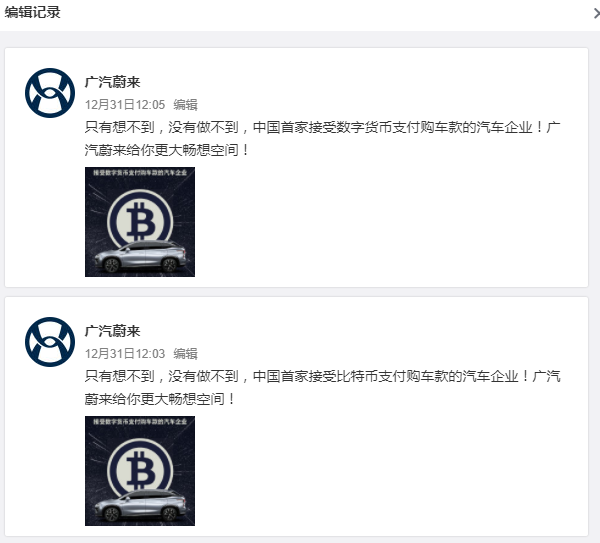 Half an hour after the company stands in the spotlight for the announcement, it deleted the Weibo post. The company said it will add new digital currency payment channels in the future depending on the actual situation.

It's unclear whether the "digital currency" it's referring to is the Chinese central bank's digital RMB or cryptocurrencies including bitcoin and ether, but the former seems more likely.

The move by GAC NIO looks more like a publicity stunt in the wake of Bitcoin's 300% jump this year. NIO was quick to clear its name from the matter, saying on Weibo that NIO has never had any program in allowing Bitcoin for car purchases.

Founded in 2018 and headquartered in Guangzhou, GAC NIO is a car brand that is a joint venture between state-owned Guangzhou Automobile Group and new carmaker NIO.

Among them, Guangzhou Automobile and NIO systems each hold 45 percent of the shares and are the main shareholders of GAC NIO, with GAC NIO holding only 10 percent.

Two years after its establishment, GAC NIO's financing progress is still stuck in the angel round, and funding has become a major problem in GAC NIO's development.

Auto-time earlier this month reported that Beijing government officials have visited GAC NIO to discuss plans for investment with the company's founder and CEO Liao Bing. The report said if negotiations go well, GAC NIO's headquarters or new production base is expected to be relocated to Beijing.

The report cited sources close to Liao as saying that GAC NIO executives, including Liao, had previously approached local governments several times to seek financing, including Zhejiang and Henan. This time, Beijing government personnel took the initiative to visit GAC NIO's home base, which means that both sides have a strong intention to cooperate.

According to Chinese technology blog iFanr, GAC NIO did not immediately deny the news, only saying that it is not allowed to disclose too many details at this stage. The company said there will be a formal disclosure in the next month that will involve a relatively large deal.

Auto-time quoted a GAC NIO insider as saying that the financing required a vote by both shareholders. At present, GAC NIO's financing is still in the angel round.

The fever of capital chasing new car makers has cooled down, but many local governments are still actively looking for partners. Hefei chose NIO, Wenzhou took WM Motor, and Zhaoqing attracted XPeng to build a factory.