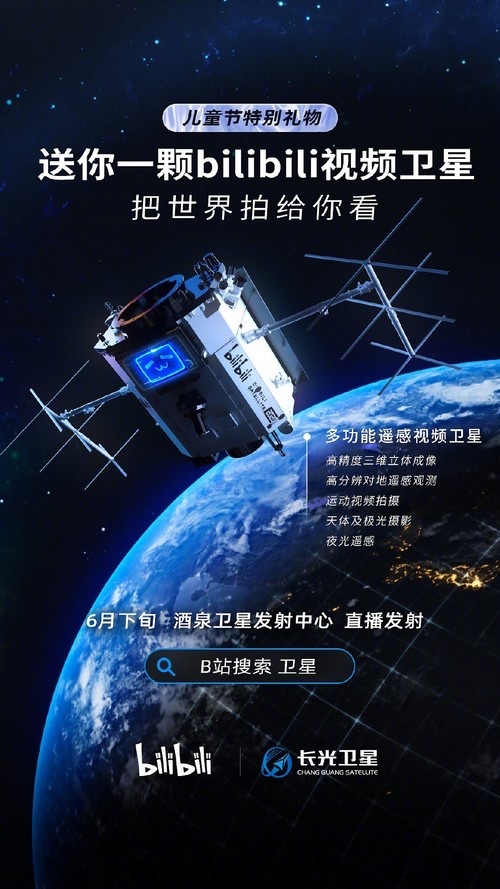 Bilibili, a video platform that is dubbed as China's YouTube, said today that it plans to launch a remote sensing satellite called "Bilibili Video Satellite" in late June, and that the remote sensing video and picture data obtained by the satellite will be used for the production of popular science content.

According to Bilibili, the satellite is a special gift it is giving to anyone with a curious mind on Children's Day, encouraging people to keep exploring the bigger world.

Bilibili said that the Bilibili video satellite is like an "eye" that sees the world from space, looking down at the Earth in a sun-synchronous orbit more than 500 kilometres from the ground, and can orbit the Earth 15 times a day.

It can also make observations of space objects such as the Moon and Saturn.

The official account of "Bilibili Video Satellite" is now officially online in Bilibili, and in late June, the satellite will be launched live on the whole process.

In the future, it will also regularly update science and technology videos based on the massive remote sensing video and picture data captured by the satellite, the content will include science and technology, humanities, history, Earth, public welfare, education and other fields, and customize the shooting tasks for Bilibili users.

After the satellite is put into orbit, it will be networked with the 16 Jilin-1 satellites launched earlier, enhancing the constellation's multi-dimensional remote sensing information acquisition capability and playing a role in emergency security, disaster prevention and mitigation, urban construction and other fields.

The Bilibili video satellite was shipped to Jiuquan Satellite Launch Center on May 11 this year, and the preparations for testing the satellite before launch are now well underway.

If the launch is successful, the Bilibili video satellite will become the first video remote sensing satellite customized by an Internet company for science and technology in the country.