Luckin Coffee, which trades on the US Pink Sheets market after delisting, rose more than 19 percent at one point Tuesday, as the company announced 33 percent revenue growth for 2020 and several important developments.

By the close of trading, Luckin Coffee's gains narrowed to 3.4 percent to $15.05. Since its delisting on June 29 last year, the company has accumulated a 990 percent gain in the Pink Sheets market. In the past year, it rose about 412 percent. 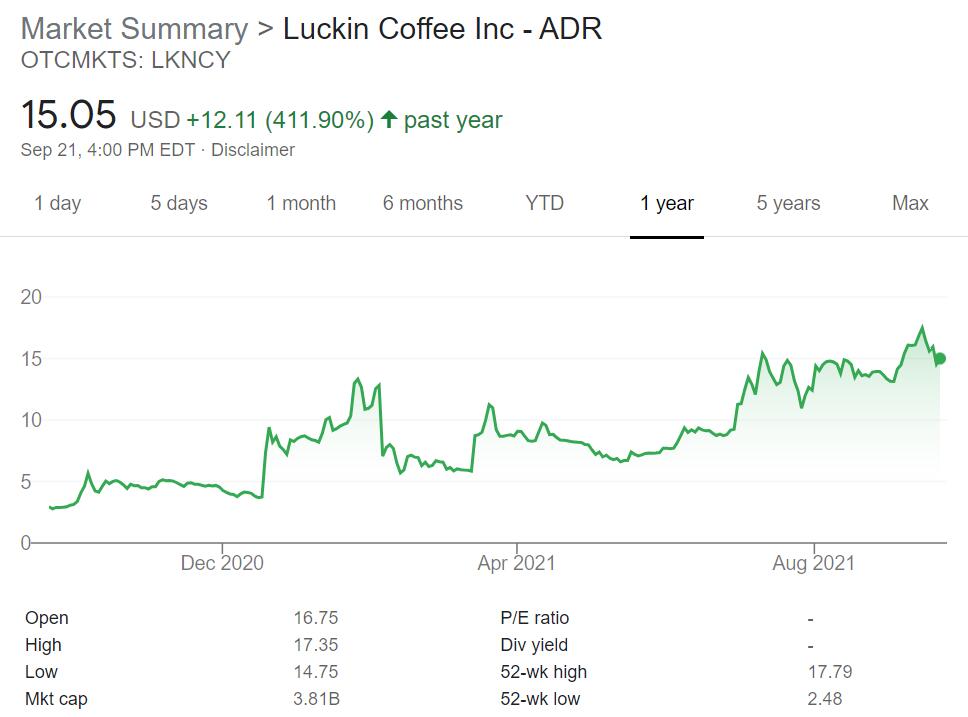 On Sept. 21, Luckin Coffee made three announcements, saying it formally filed its audited 2020 financial report with the US Securities and Exchange Commission, signed a $187.5 million letter of intent to settle with US class action litigants and formally filed a debt restructuring plan for convertible debt creditors with the Cayman court.

It has operating expenses of RMB 6.621 billion, compared with RMB 6.237 billion in 2019. The company said this was in line with its business expansion plans and included $475.3 million in losses and expenses related to the previously announced investigation and restructuring.

Its operating expenses as a percentage of net revenue decreased from 206.2 percent in 2019 to 164.1 percent in 2020, driven primarily by growth in economies of scale.

This resulted in Luckin Coffee's annual net loss under GAAP of $5.6 billion, compared to a net loss of $3.16 billion for the same period in 2019. Net loss attributable to common shareholders and angel shareholders was $5.589 billion, expanding by more than 50 percent from a loss of $3.713 billion in 2019.

The company said it has formally filed a debt restructuring proposal to its convertible debt creditors in the Cayman court, involving $460 million of convertible senior notes due 2025 with an annual coupon of 0.75 percent, seeking the court's approval to hold a meeting of creditors to consider and approve the proposal.

The company also said it will settle the US securities class action and is working to enter into a formal settlement agreement to fully resolve all claims of investors who purchased the company's US ADSs between May 17, 2019 and July 15, 2020, in an amount based on a global settlement amount of $187.5 million, with a pro rata reduction of the settlement requirement based on valid opt-out notices received Amount.

On September 7, Luckin Coffee had stated that the overall restructuring plan was progressing in an orderly manner, with multiple milestones completed, and that it had released its audited 2019 annual financial report.

The announcement at that time showed that Luckin Coffee had achieved strong growth in both revenue and net profit, with overall operations gradually improving, thanks to an increase in the number of trading users and further diversification of its high value-added product portfolio.

As of July 31 this year, the company's unrestricted cash and cash equivalents reached $775.8 million.

It was asked to delist from Nasdaq on May 19, 2020, and its trading was officially suspended on June 29. The company was subsequently hit with a class action lawsuit by US investors, and in April 2021 a number of US investors sued Luckin Coffee in Shanghai and a formal case was filed.

Luckin Coffee said to be mulling new funding round