After becoming the No. 1 smartphone vendor in Europe, Chinese smartphone giant Xiaomi has also won the crown in Southeast Asia.

Xiaomi became the No. 1 smartphone vendor in Southeast Asia for the first time, the company said on Aug. 9, citing data from market research firm Canalys for the second quarter.

The data showed Xiaomi had a 22 percent market share and that its 107 percent annual growth rate was the highest among the top five. 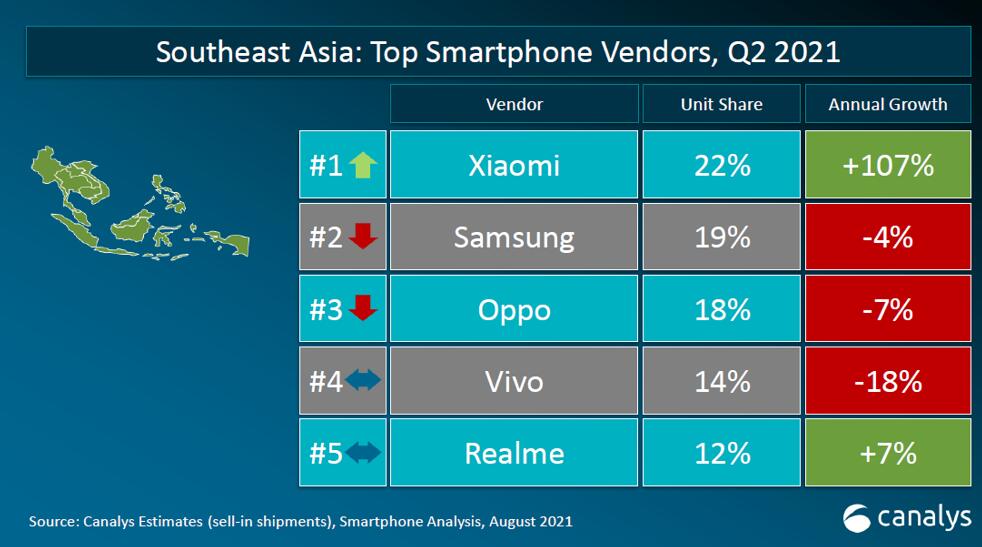 KM Leong, General Manager for Southeast Asia of Xiaomi International, said this is a historic moment for the company, and the company will continue to expand its footprint in Thailand, Myanmar, Vietnam and the Philippines.

Xiaomi's success is due to the local fans and the business ecosystem that its partners have built together, Leong said.

According to Canalys, Xiaomi ranked No. 1 in Malaysia for the second consecutive quarter, No. 1 in Indonesia and Myanmar, and No. 1 in Thailand for the first time.

In Vietnam, Xiaomi was the only smartphone brand that still achieved significant growth, with a 68 percent year-over-year increase, the company said, citing Canalys data.

The company entered the top three among smartphone vendors for the first time in Singapore and continued to be the top growing brand year-over-year in the Philippines in the second quarter, the company said.

Another market research firm Strategy Analytics said last week that Xiaomi became the largest smartphone brand in Europe in terms of market share for the first time in the second quarter, overtaking Samsung and Apple.

Xiaomi overtakes Samsung to become No. 1 in European market share