Didi, the Chinese ride-hailing giant listed on the New York Stock Exchange, was down about 30 percent at one point before its losses shrunk to about 22 percent. Didi only went public in the US last week, and Tuesday was its fourth day of trading. 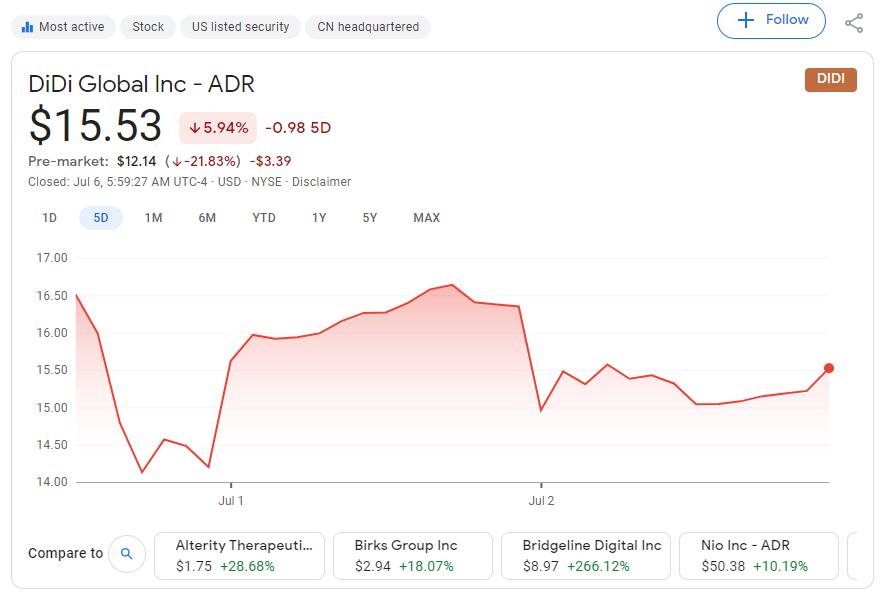 Didi, which was founded nine years ago, officially listed on the New York Stock Exchange on the evening of June 30. According to its prospectus, Didi's China travel business, international business and other business revenues in 2020 are RMB 133.6 billion ($20.7 billion), RMB 2.3 billion and RMB 5.8 billion, respectively.

Of the platform revenue in 2020 and the first quarter of 2021, 93.4 percent will come from China and 6.6 percent from international. In terms of earnings performance, Didi already holds more than 80 percent of China's ride-hailing market share.

However, on July 2, China's Network Security Review Office announced the launch of a network security review of Didi, and announced that Didi stopped new user registrations during the review period to prevent risks from expanding.

On the evening of July 4, the State Internet Information Office said it had notified app stores to take down the Didi App, saying it had serious violations of the law regarding the collection and use of personal information.

On July 5, after Didi, three more platforms were hit.

To cooperate with the cybersecurity review and prevent the expansion of risks, the three companies stopped new user registration during the review, the statement said.

Notably, "Yunmanman" and "Huochebang" merged in 2017 to become Full Truck Alliance Co, which was listed on the New York Stock Exchange on June 22 under the ticker symbol "YMM".

Full Truck Alliance was down about 15 percent and Kanzhu was down 10 percent in pre-market trading on Tuesday.

Didi's app ordered to be removed from app stores