Luckin Coffee sued by US stock investors in Shanghai, first case of its kind

On behalf of Luckin Coffee's US investors, a team of attorneys filed a lawsuit against the company with the Shanghai Financial Court, and the case has been duly filed.

There is no precedent for an investor suing a US-listed company in China, making this case the first of its kind.

As of April 29, 2021, three investors had joined the class action, and about 20 were interested, according to Dong Yizhi, an attorney with Joint-Win Partners, as cited by Ifnews.com.

In addition, more than 100 people have made inquiries, and the numbers are still in flux, Dong said.

Luckin Coffee was founded in June 2017 and took just under two years to go public in May 2019. On its first day of listing, Luckin Coffee's total market capitalization reached RMB 33.032 billion ($5.1 billion).

At the end of 2019, Luckin Coffee's total market capitalization reached RMB 65.99 billion, almost double compared to the first day of listing. However, in February 2020, Luckin Coffee was exposed to fraudulent performance.

At that time, Muddy Waters Research released a shorting report on Luckin Coffee completed by an anonymous investigator.

The report showed that the number of items sold daily at individual Luckin Coffee stores was inflated by at least 69% and 88% in the third and fourth quarters of 2019, respectively.

Since then, Luckin Coffee has established a special investigative committee to investigate.

On April 2, 2020, Luckin Coffee issued an announcement stating that, after an investigation, the company's Chief Operating Officer (COO), Liu Jian, and several employees reporting to him, jointly falsified sales amounts of up to RMB 2.2 billion since the second quarter of 2019.

Luckin Coffee's revenue for the first three quarters of 2019 was only RMB 2.929 billion.

Luckin Coffee was delisted in June 2020, just 13 months after it went public. At the time of delisting, Luckin Coffee's total market capitalization was only RMB 2.254 billion, a 93.18% shrinkage compared to the first day of listing. 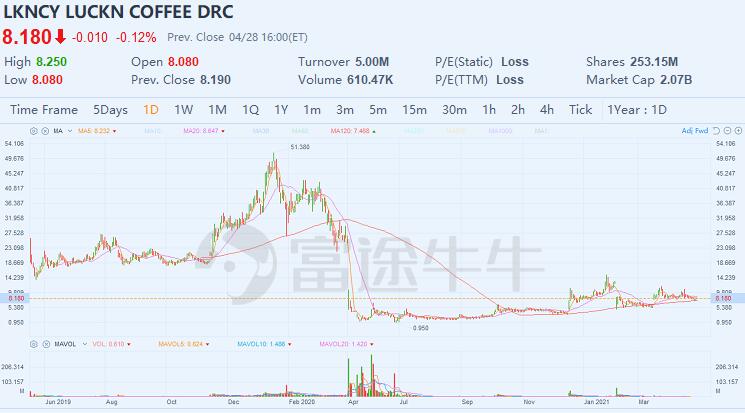