Chinese technology giant Huawei has increased its share of the global telecom equipment market to 31 percent, edging out Nokia, Ericsson, ZTE, Cisco, Ciena, and Samsung for the top spot, according to a report released Tuesday by market research firm Dell'Oro Group. 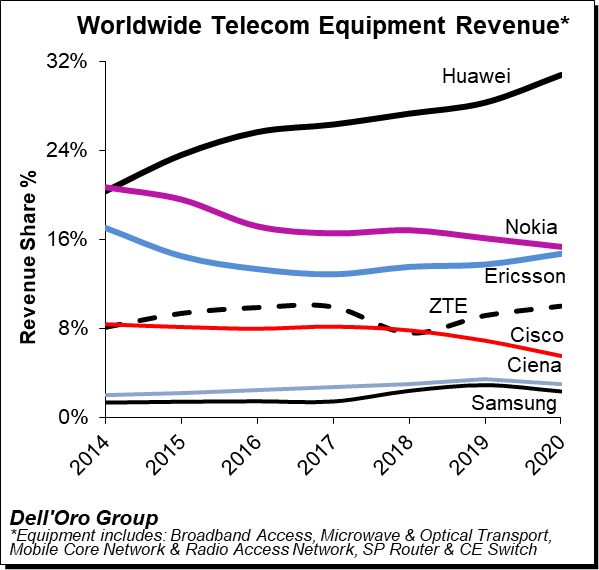 The global telecom equipment market grew by 7% year-on-year for the full year 2020, the fastest growth rate since 2011, according to the report.

Revenue share continues to be influenced by the status of 5G deployments in highly concentrated markets. While Ericsson and Nokia boosted their RAN market share in regional markets outside of China, preliminary estimates indicate that Huawei's share of the global telecom equipment market, including China, grew by 2-3 percentage points for the full year 2020.

The positive momentum in the overall telecom market continued from Q1 to Q4 2020, thanks to strong growth in several wireless segments (including RAN and mobile core networks) and moderate growth in the broadband access and carrier-grade switch markets, according to the report's estimates.

Faster growth rates in the mobile core network and RAN markets helped drive the acceleration for the full year 2020, with growth in both segments exceeding expectations, the report said, adding that supply chain disruptions due to the Covid-19 outbreak, which affected some telecom segments early last year, had largely been mitigated by the end of last year.

As investment in China outpaces the overall market, Huawei and ZTE's combined revenue share grows by 3-4 percentage points between 2019 and 2020, and together they account for more than 40% of the global telecoms equipment market, according to Dell'Oro's estimates.

Even though the baseline has become higher, the Dell'Oro analyst team remains optimistic for the full year 2021 and expects the overall telecom equipment market to grow by 3-5 percent.