Baidu started the process of secondary listing in Hong Kong on January 20 and plans to formally submit its listing application in Hong Kong after the Chinese New Year, according to Tencent News.

Baidu has identified Goldman Sachs and CITIC as the listing sponsor team, the report said. February 11-17 is this year's Chinese New Year holiday.

It has been seven months since Baidu's initial plan to list in Hong Kong. In late July 2020, Baidu executives, including Robin Li, met with a number of investment banks to launch the secondary listing plan in Hong Kong.

The reason for Baidu's repeated delays on the plans is unknown, but sources cited by Tencent News said it was not surprising because, unlike previous secondary listings in Hong Kong of Alibaba and JD.com, Baidu has performed mediocrely in the capital market in recent years.

Although Baidu has a strong will for secondary listing, it will take some time for investors in Hong Kong to be able to recognize and accept Baidu, the report said.

On January 11, Baidu announced its first big move in recent years - the formation of an intelligent electric vehicle company with Geely Holding Group. Baidu will lead the company and integrate its artificial intelligence, Apollo Autonomous Driving, Apollo OS, Baidu Maps, and other technologies with this new car company.

In about 20 trading days after Baidu announced its entry into the electric vehicle industry, Baidu's stock price has risen nearly 60 percent. As of the close of trading on January 19, Baidu's market capitalization exceeded $85.4 billion, returning to its peak of three years ago. 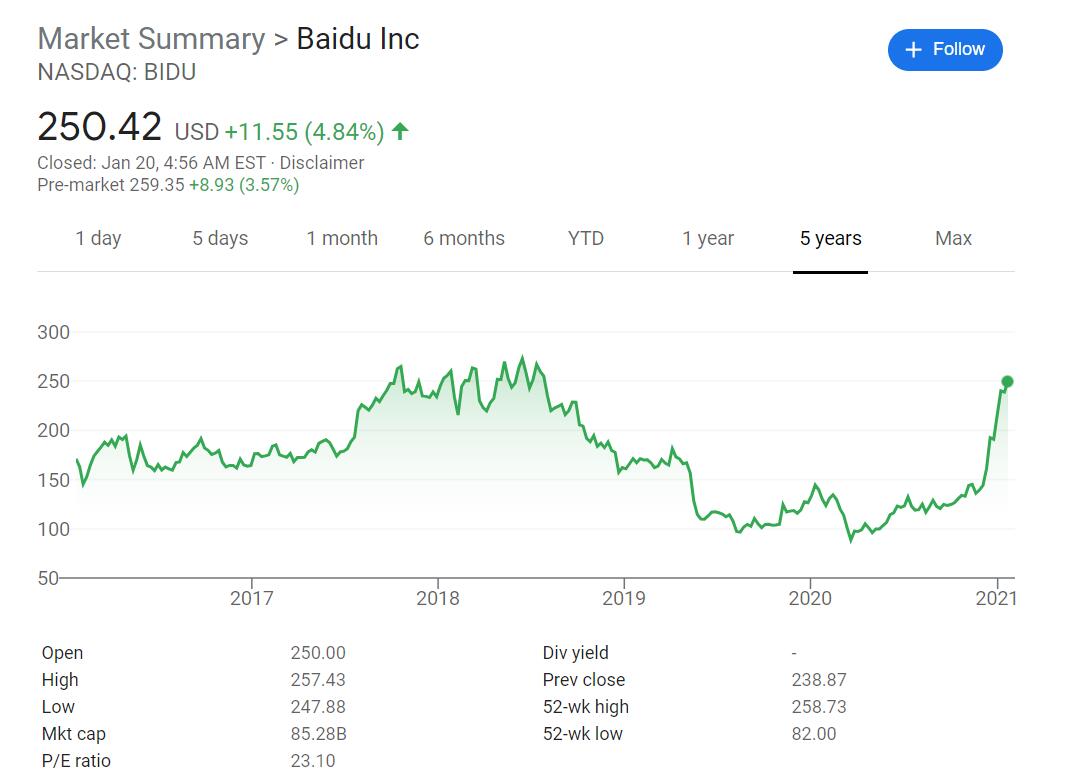 At the end of last year, because of the U-shaped rebound in its stock price compared to two years ago, Baidu announced a special award called "U Bonus" for employees who had shared the company's fate in the past two years.

In an internal letter obtained by cnTechPost at that time, Baidu said it had gone through a tough time in the past two years and was now back on an uptrend with a U-shaped share price performance.

For that reason, the company decided to give out a special U bonus to Baidu emplyees who had shared the company's fate over the past two years and were willing to continue to work together, the letter said.

The bonus, which is not much, is equivalent to 50 percent of December's base salary and will be paid on January's payday.

The latest earnings report showed that in the third quarter of 2020, Baidu achieved revenue of 28.2 billion yuan and net profit of 13.7 billion yuan, both of which exceeded market expectations.