A new charger from Huawei has received regulatory approval, and it supports 20V/6.75A input, meaning up to 135W fast charging, according to a well-known Weibo blogger.

The information comes from @数码闲聊站, which often posts accurate information, at a time when several phone manufacturers are preparing to release phones with Snapdragon 888 processors, as well as increasing information about Huawei's P50 series of phones. 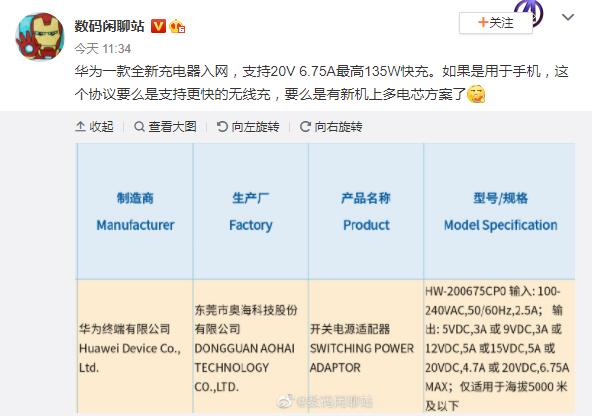 According to the previous information, the Huawei P50 series will be equipped with the same 5nm Kirin 9000 processor as the Mate 40 series. However, due to the current shortage of Huawei chips, there are reports that Huawei may switch to MediaTek's SoC.

There are also previous patents that show that Huawei will equip the new phone with liquid lens technology, which enables higher focusing speed.

The Huawei P50 Pro is expected to have a 6.6-inch display and a body size of 159x73x8.x mm. It will likely have a rear camera module on the back with a design similar to the Mate 40, as well as a new primary lens and ultra-wide angle cinema lens.