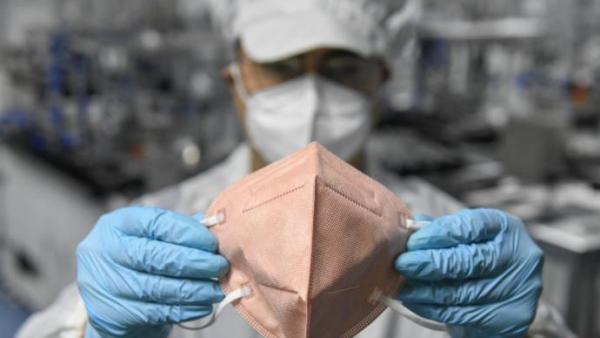 A company in Hefei, Anhui province, recently put into production a mask that can inactivate viruses and bacteria, which looks similar to an ordinary N95 mask, with the difference that the color is orange-red, according to chinanews.cn.

The non-woven fabric of this mask contains active metal copper ions, which have been proven to be effective in killing bacteria and viruses. The mask can be used repeatedly about 60 times because of the long effective action time of the copper ions in the fiber, the report said.

The technology has been validated by the State Key Laboratory of Emerging Infectious Diseases at the University of Hong Kong, with inactivation efficiency at or near 100 percent after 10 minutes of exposure for novel coronaviruses with titers no higher than 104 PFU/ml.

Can coronaviruses spread through the air? WHO answers

For novel coronaviruses with a titer of 105 PFU/ml, close to 100% inactivation was also achieved after 60 minutes.

The company said they have been experimenting with copper oxide nonwovens in masks since April of this year. The company has already received 250 million domestic and international orders, with an estimated value of more than 1.5 billion yuan.

Copper, silver, lead, and other heavy metal ions can destroy the cell membrane of bacteria and fungi, causing them to die. Meanwhile, when various viruses encounter copper ions, they will also undergo oxygen reduction reaction and die quickly.