NIO shares plunged nearly 8% on Friday after being shorted by Citron, but the company's shares rallied more than 2% on Monday and more than 2% in pre-market trading on Tuesday.

There's no doubt Citron has a strong track record in the past, and companies that have been shorted by them have often experienced big drops in their stock prices, and some have even faced serious legal consequences.

These companies usually have one thing in common, and that is questionable financial practices that Citron has used to profit from their short sales.

However, the main argument Citron used to short NIO was competition from Tesla.

Citron argues that the upcoming China-made Tesla Model Y poses a threat to NIO's prospects. It also cites a Deutsche Bank report to support this view:

We continue to see some risk that Tesla could materially cut the price of its locally made (MIC) Model Y from 488k RMB ($73k) to This could potentially hurt near-term sentiment and slow down NIO's order book momentum considering it would be a direct competitor to the NIO.

This could potentially hurt near-term sentiment and slow NIO's order book momentum considering it would be a direct competitor to NIO's EC6 and ES6.

But interestingly, Deutsche Bank said in a report released Monday that the sell report on NIO needs to be addressed given the stock price volatility and because "the author cites the bank's research but provides an incomplete picture of our view."

In particular, the main pillar of the bearish argument focuses on the upcoming launch of Tesla's locally made Model Y SUV and likely price cut which would hurt demand for NIO's comparable offersing (ES6 and EC6).

While we continue to view this as a risk, we see it as a temporary headwind which will subsequently be more than offset by NIO's growing brand awareness.

Some thoughts on Citron $NIO report:

The view of Weibo finance blogger @看透市场迷雾 (literally means seeing through market mist), who writes in "Why is the Citron shorting report on NIO very hollow?" is a typical one.

The following is a translated version of his full article.

Why is the Citron shorting report on NIO very hollow?

After Tesla's market cap rose to $400 billion, Toyota's bosses decided Tesla wasn't worth it all. 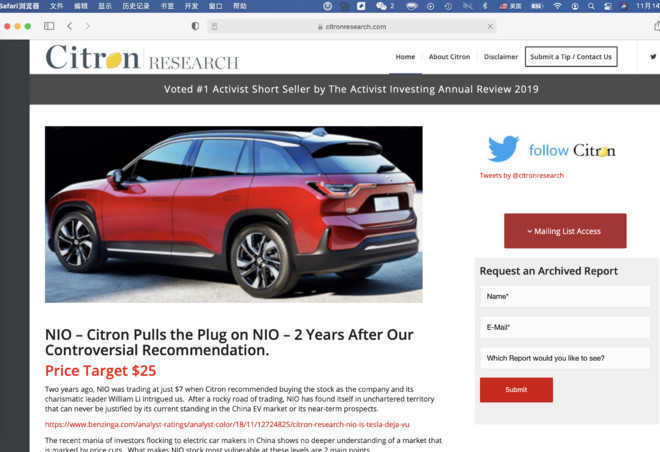 In fact, there's been a lot of controversy since inception about how much NIO, Tesla, and other emerging car companies are worth because NIO is not on the usual path.

I don't think this question should just compare NIO to GM, but more realistically compare the traditional car companies separately from the emerging smart car companies.

If you've actually used a car from either camp yourself, you'll see that the real difference isn't electric vs. fuel-efficient, but rather a huge difference in the experience of using the car due to the technology and smart attributes.

The former has manufacturing attributes, large-scale industrial product attributes, and the product is set in stone when it is produced and delivered to the customer.

The latter add personalized and intelligent technology attributes, where not only the software can be OTA'd, but even the hardware can be upgraded midway.

NIO is about to report its Q3 earnings, what to watch?

Their continued investment in intelligent and driverless technology and the results they have achieved are also beyond the reach of traditional car companies.

Money is smart, and investors of all types vote with their actions to categorize GM as a traditional company and value it according to its manufacturing attributes.

So, comparing the market cap of $50 billion NIO with Mercedes, BMW, Audi, and GM doesn't make much sense in and of itself.

If someday VW Group, GM, and other traditional car companies also catch up in terms of intelligence and electrification, reaching or even surpassing Tesla, NIO, and other emerging car companies, then the capital markets will likewise give tech companies valuations.

It's just that, before they can do all that, they need to forget about their past performance and shed their financial growth targets for the next few years.

Next, I'll point out the many errors in this Citron report, as well as the misleading content that can easily mislead investors, to illustrate the underlying reasons why investors are so divided on valuations.

Citron doesn't think NIO is worth owning the stock at its current price, but is only worth $25, for a number of key reasons. 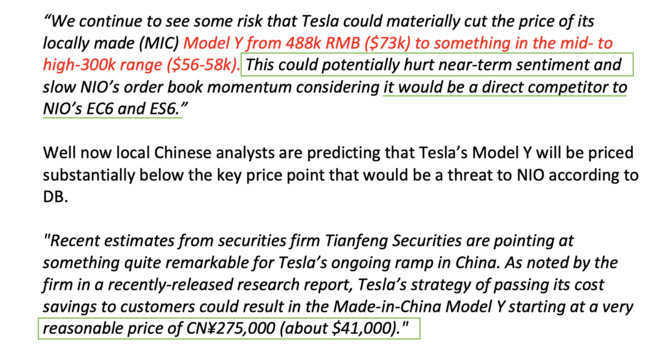 What Citron means is that the upcoming China-made Model Y will hit the sales of the NIO EC6 and ES6 at a very low price (starting at, say, RMB 275,000).

But in reality, as a commodity that "combines consumer and technology attributes," consumers' buying decisions are not based on brand and price alone, but on a combination of many individual factors.

Citron did not analyze from the market level, nor did it combine consumer psychology, customer demand, brand influence, battery swap technology line and other multiple angles to analyze in detail, and only gave a very simple conclusion.

This is an absurd conclusion without a rigorous argument or process of proof.

Early on when the Model 3 was produced in China, many people thought it would seriously impact XPeng and NIO sales.

But the truth is that the Chinese EV market is large enough to accommodate more players (if you can offer great products and services to consumers, people will buy them), and the domestic EV market is far from being at a stage where car companies are competing for stock users.

As a result, we can see from the first half of 2019 so far that even though China-made Model 3 sales exceed 10,000 units per month, it doesn't affect the climb in sales of the new Chinese bookmaker, everyone is growing fast.

The flip side is brands like "Qoros", which may indeed have good hardware and even affordable prices.

But because they don't speak the language that consumers understand, and they don't have a clear enough brand, they get lost in the crowd and consumers don't even notice their strengths.

Citron also tries to support NIO's lack of competition by saying "Tesla sold more than twice as many units as NIO last month".

This statement is a classic logical fallacy, small market share does not mean less competitive, especially since it focuses on a static point in time and ignores trends over time.

Thus, the report refers to two completely separate concepts, which Citron is deliberately obfuscating. I wonder if Citron has deeper considerations and hidden agendas?

The potential of the U.S. auto market itself is much smaller than China's. Due to Tesla's efforts over the years, the U.S. public has a higher acceptance of EVs, starting with the Tesla brand.

Most of the other local EV brands are not yet in mass production, resulting in Tesla's dominant market share in the US.

In fact, the US EV market is not mature, it's a market where there are no other brands except Tesla.

With EVs still in niche demand, the lack of competition in the US EV market makes it objectively unhealthy.

The Chinese market, however, is a completely different picture.

The rapid increase in disposable income per capita is helping to improve the affordability of "mid to high end cars".

People who used to ride motorcycles are gradually buying Wuling Hongguang MINI EVs, while those with higher demand may choose Tesla or NIOs, giving EV brands at all price points plenty of room to grow.

China's share of EVs in 2019 car sales is higher than the US market, which is very disruptive.

China sold 1.2 million EVs in 2019, a 4.6 percent share, and this was achieved against the backdrop of a gradual decline in EV subsidies.

The market data says it all: the Chinese EV market is more spacious and overall development is more mature.

Most importantly, China's EV market has moved past the early "chaos" of the industry.

Subsidy fraud has been curtailed, the industry chain has been centralized, and companies that could not be mass-produced have closed down, giving the market ample room to clear.

This will not only help accelerate the maturity of the domestic EV market, but also lay the foundation for future sales of domestic brands overseas.

3, Number of shorted shares and interest rates are at an all-time low 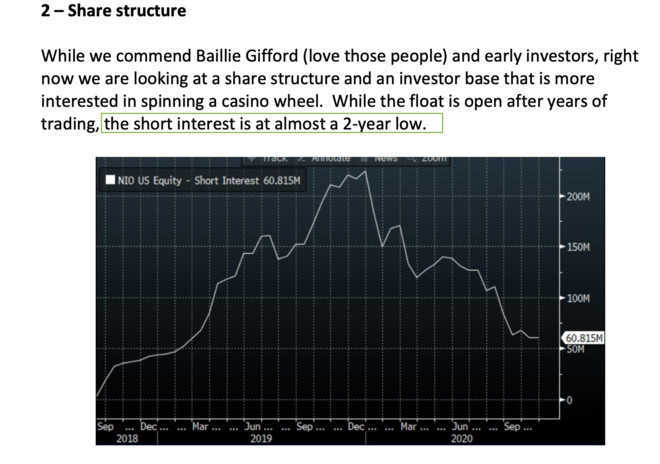 What Citron is saying is that because the total number of shares shorted is at an all-time low position, it is more likely to be shorted in the future.

This conclusion, too, commits a conceptual error, as short investors do not choose to be short because their short positions are low, but more so because the company itself is flawed. Thus, Citron's argument is reversing cause and effect.

The total number of shares shorted also corresponds to the shorting interest rate, which is very high between October 2019 and March 2020 as projected by the interest rate on borrowed coupons from Earnest Securities, which is basically a 90%-100% lending rate on my shares during this period, with an annualized coupon rate of 50% or more, so I earned a lot of interest income during that time.

Why is the interest rate on lending coupons so high? It's all for these reasons: there are few voucher sources and many people in demand.

In 2019 everyone thought NIO would go bankrupt, so shorting NIO was a very popular move at the time. I also had a few friends who shorted from $10 and profited handsomely when NIO fell to $2.

But whether you are long or short, you can't ignore the economic and policy environment, industry dynamics, and the real-time state of the business.

At the company level, for example, there is a big difference between NIO's current model sales, which are rising month after month, gradually increasing gross margins, fully validated battery swap model, becoming one of CATL's largest customers, and holding high cash reserves, and the situation at the end of 2019.

With NIO gradually getting on track, more and more funds, institutional investors, and passive money have started allocating positions in NIO since the beginning of this year. This is not necessarily fanaticism, but rationality.

There are only two types of people who dared to buy NIO at $1: loyal fans or those with a risk-taking mindset, which institutions generally are not. 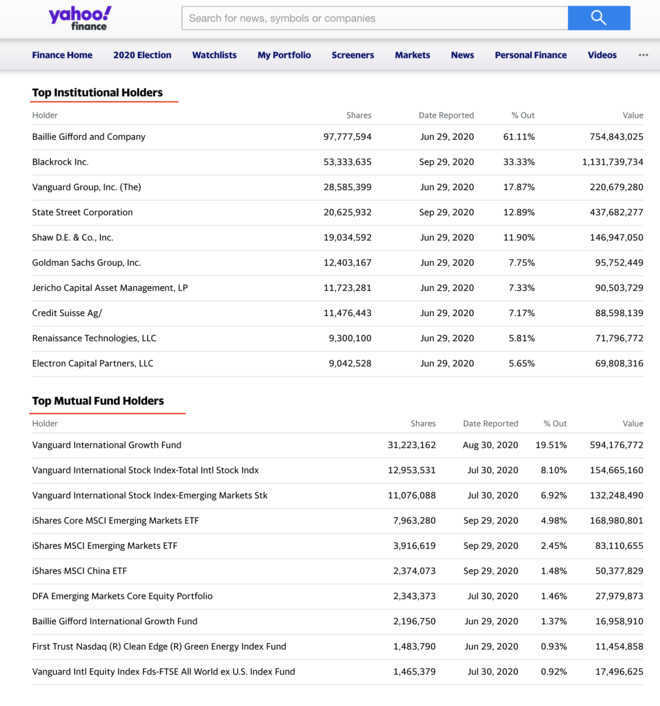 A lower total number of shares shorted and a lower interest rate on coupon borrowing does not, in and of itself, logically justify that the company "should be shorted".

As a whole, the rationale for this Citron report is so hollow and weak that it doesn't make for a rigorous chain of logic.

There's no denying that NIO's too-fast rise during the year has overspent expectations for the future, that short term investor staging will increase, and that institutions will consider short term performance and may appropriately avoid it.

Throughout the history of the stock market, growth stocks themselves have been highly controversial, so if you plan to hold NIO, it's best to base it on the mindset of investing in growth stage companies for the long term.

All of this is dynamic, and there is no "end game" for companies that have the ability to continue to innovate.

Otherwise, they could easily follow the same path as Nokia and HTC.