Home Cars Why did Buffett invest in BYD and not Tesla?

Why did Buffett invest in BYD and not Tesla? 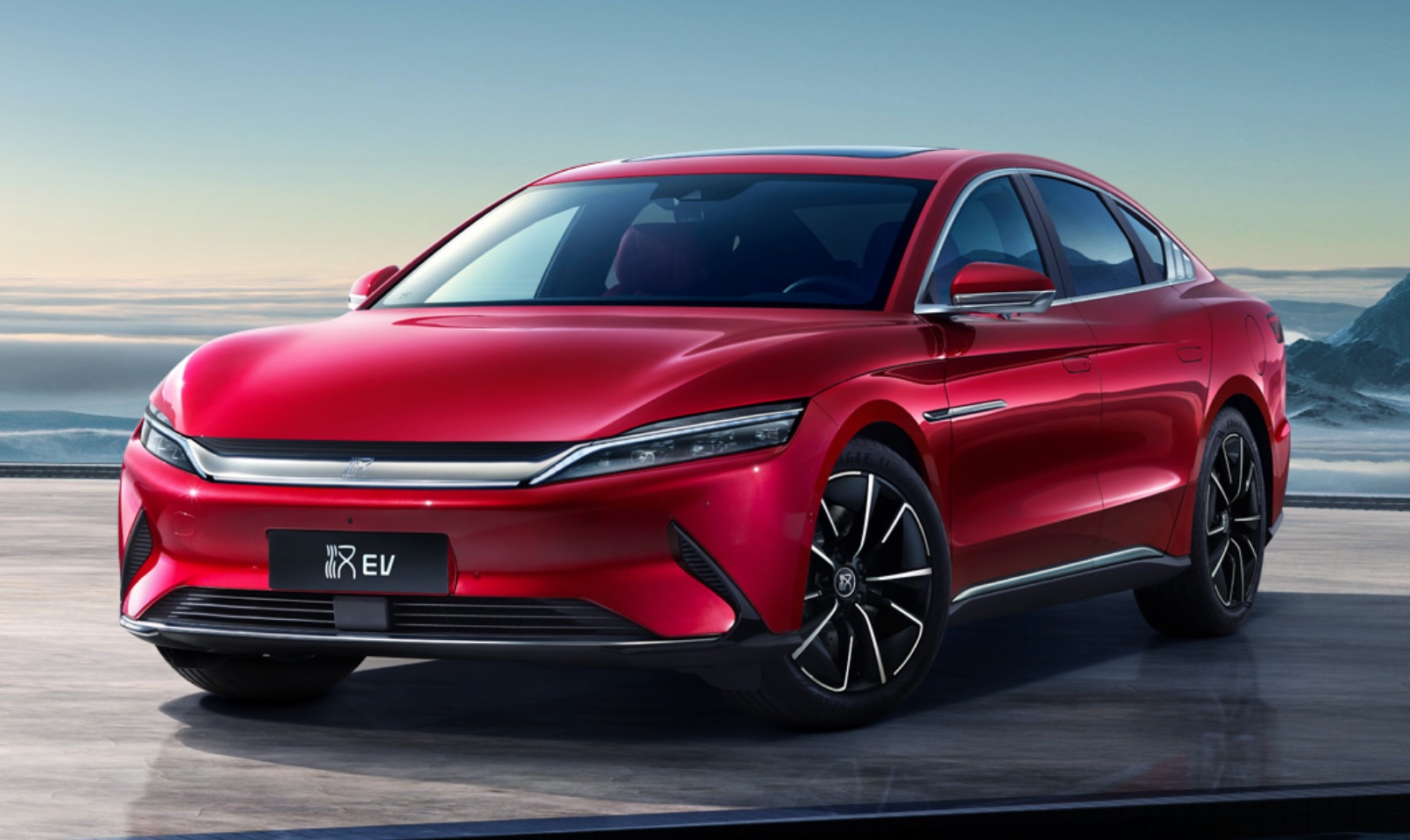 BYD shares traded in Hong Kong rose as much as 300% during the year.

Omaha billionaire Warren Buffett has not reduced his stake in BYD since he bought it in 2008.

In September 2008, Buffett bought 225 million shares of BYD at HK$8, costing HK$1.8 billion. The current market value of this holding is as high as 35.2 billion Hong Kong dollars, earning Buffett 33 billion HKD in 12 years, or 18.6 times the original investment. 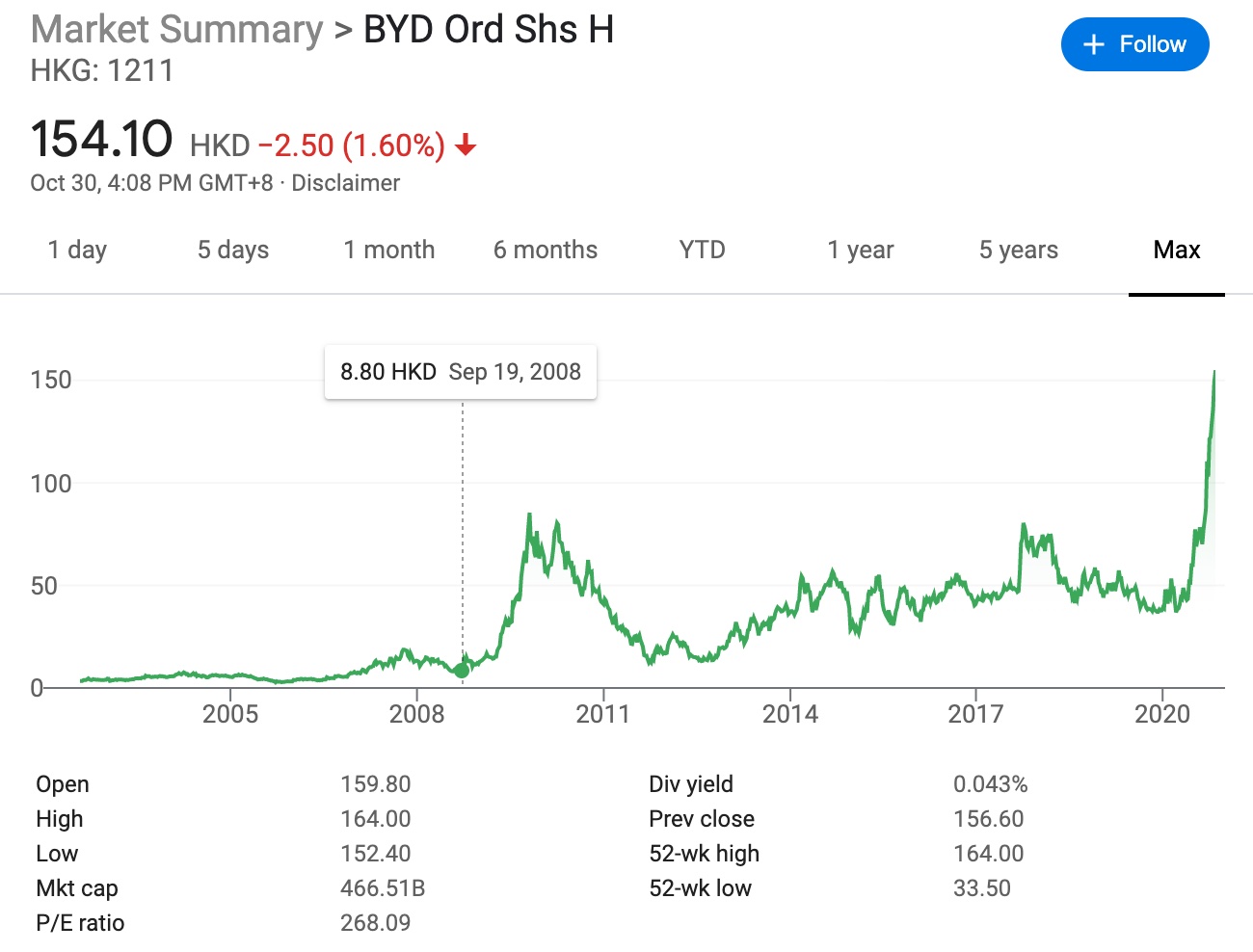 BYD, has also become a classic battle of Buffett's investments.

Buffett heavily endorses BYD, and I have to mention a Chinese guy.

In April 2020, Warren Buffett endorsed BYD again, this time with a mask. He's wearing a BYD mask and one that says "I want to live to be 100 and still look good" with the message "My BYD mask is helping me achieve my goals" inside the photo.

The person who uploaded the photo of Buffett to Weibo is Li Lu, the founder of Himalaya Capital, who recommended Buffett's partner Charlie Munger to BYD in 2008.

On September 27, 2010, at a BYD event, Buffett said BYD is a young and promising company that is experiencing rapid growth and is a leader in innovation and technology. He said, "BYD is the right choice for me."

Buffett's Berkshire first invested in BYD in 2008, after Munger recommended that Buffett meet Wang Chuanfu - BYD shares H-shares were trading at just HK$8 at the time.

The following year, in January 2009, China's Ministry of Finance issued a "Notice on the Implementation of Demonstration and Promotion of Energy-Saving and New Energy Vehicles", and the new energy vehicle subsidies began, signaling China's determination to develop new energy vehicles.

It was that year that BYD's stock price began to soar. Wang Chuanfu has also become the "richest man in China" on the Hurun China Rich 100 list.

Why did Warren Buffett and Munger choose BYD over Tesla, a US-based company?

In fact, when we look at the timeline, it's not so much that Munger was bullish on BYD's prospects back in 2008, but rather that Munger understood the layout of BYD and the Chinese government's determination to push the new energy industry forward.

At the same time, Tesla and Musk were entering their darkest hour, and in July 2006, Musk unveiled the Roadsters to the world, shouting, "The electric cars that came before were terrible.”

Trouble ensued, however, when the Roadsters entered mass production; it cost $200,000 to produce a Roadster, and the pre-sale price was only $85,000.

Everything snowballed when the financial crisis hit in 2008. In order to save himself, Musk sold his McLaren sports car and other assets, gambling his entire fortune, and even made plans to move into his wife Justin's parents' basement.

To this day, Buffett and Munger have not wrestled with the 40-fold growth of Tesla, the miracle company, but they have chosen to invest in BYD without the risk of having to worry about the CEO picking up girls and marijuana, or the news of bankruptcy from time to time.

The BYD bubble burst in 2010, but it has continued to grow every year since, and Berkshire has still managed to generate annualized gains of more than 20 percent.

On January 23, 2020, at Buffett's luncheon, when he was asked what he thought of Tesla.

Tesla is a great company, but he's not an ideal investment target," Buffett said.

At the same time, the soaring share price also made Musk's wealth rise overnight, surpassing the stock god Warren Buffett with a net worth of $70.5 billion and becoming the seventh richest person in the world.

What is the core value of BYD?

In the midst of a cold winter for auto sales, BYD stock is riding high, which is astonishing.

Contrary to most people's perceptions, although BYD is positioned as an automotive company, the automotive business accounts for only about half of its revenue composition.

According to BYD's 2020 semi-annual report, BYD's automotive and related products business only accounts for 52% of total revenue. This figure is actually down slightly compared to the same period in 2019, as it is known that the epidemic has affected the general downturn in automotive sales in the first half of this year.

BYD revenue in the mobile phone components and assembly services accounted for 40%, and secondary charging battery and photovoltaic business accounted for 8%.

However, the mobile phone business belongs to the processing, gross profit is low, imagination space is not big.

BYD's performance in the PV industry has been mediocre, with secondary rechargeable batteries being an old BYD business.

Despite the bright results, BYD's cash flow is still not optimistic. Its debt-to-equity ratio fell slightly from 68% to 66%. As of the end of the third quarter, BYD's book money was RMB 13.2 billion and its current assets totaled RMB 107.8 billion. Book-to-market money was just one-eighth of its revenue for the previous three quarters.

A P/E ratio of more than 100 times already indicates that investors are betting on BYD's future, not the present.

BYD stock has risen thanks to the success of BYD Han.

On July 12, the BYD Han series of models went on sale, and on July 13, BYD's market capitalization surpassed SAIC to become China's No. 1 car company.

BYD's high-end models, which cost more than 300,000 yuan, have been the subject of much criticism since their launch, but the sales figures are "really fragrant". By the time of its official launch in July, BYD officially revealed that it had accumulated 30,000 orders.

In every dimension, the Han is a vehicle built to take on the Tesla Model 3.

In September, SAIC-GM-Wuling won the new-energy vehicle market sales title, followed by BYD and Tesla China in third place, according to the Passenger Union.

But will this pattern be broken by Tesla's late arrival?

In October, the price of the Model 3 standard range-extended version has been cut to RMB 249,900. In addition, BYD's advantage will be further eroded with the official delivery of the Model Y to the Chinese market next year.

BYD's other core value is the blade battery, and the BYD Han is the first BYD model to feature one.

The BYD blade battery is already being supplied and will most likely take orders from Daimler, which will help BYD unlock greater business value. This is a new story.