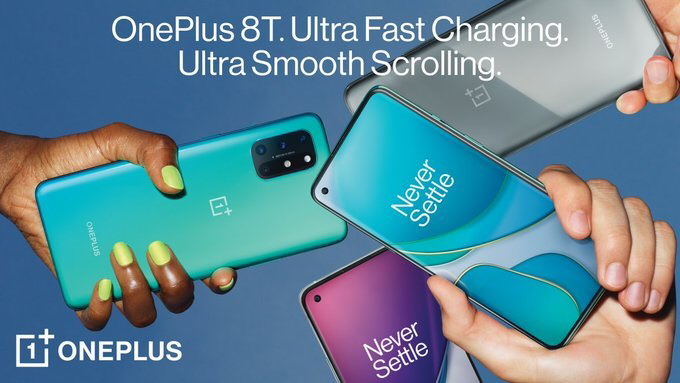 Along with the new phone, OnePlus also unveiled a new $45.99 pair of true wireless headphones called the OnePlus Buds Z.

The OnePlus 8T comes with OnePlus' latest Warp Charge 65 technology.As announced by OnePlus last month, the 65W charging technology is capable of charging the OnePlus 8T's built-in 4500mAh battery to nearly 58% in 15 minutes and a full charge in 39 minutes.

The OnePlus 8T is powered by a Snapdragon 865 processor and the phone supports sub-6GHz 5G, but no mmWave mmWave.It also comes with an in-display fingerprint sensor and is powered by Android 11-based OxygenOS 11.

On the camera front, the OnePlus 8T comes with a quad-lens camera on the back: a 48-megapixel primary sensor; a 16-megapixel ultra-wide angle with a field of view of 123 degrees; a 5-megapixel macro lens and a 2-megapixel monochrome sensor to help capture black and white photos.

The phone has a 16-megapixel front-facing perforated screen camera.