The list also shows that five of the top 10 are handset makers, including the top four, and sixth-place Transsion, known as the king of African smartphones, which shipped 620 million smartphones last year, accounting for 40 percent of global shipments. 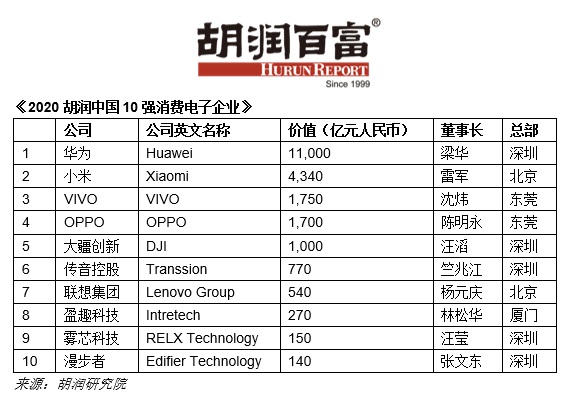 Founded in 1987, Huawei is the world's leading provider of information and communications infrastructure and smart terminals.

Today, Huawei employs 194,000 people and has operations in more than 170 countries and regions, serving a population of more than 3 billion.

Huawei is a 100% privately held company owned by its employees. Huawei operates an employee stock ownership plan through its labor unions, with more than 100,000 employees participating.

According to Canalys, in the second quarter of this year, Xiaomi was one of the top four smartphone shippers in the world, with a market share of 10.1 percent.

2020 marks the 10th anniversary of Xiaomi's founding, and the company earlier announced that its core strategy for the next 10 years will be upgraded to "Mobile X AIoT" to strengthen its AIoT footprint around its core business of mobile phones.