Didi said to have support for HarmonyOS 2.0, allowing users to hail cabs via watch

Chinese ride-hailing giant Didi Chuxing has added support for Huawei's HarmonyOS 2.0 and the Didi app is supported in the watch with HarmonyOS, according to a Weibo blogger.

This allows users to take a taxi with the watch with the latest operating system, the blogger,  @小小小才神, said. 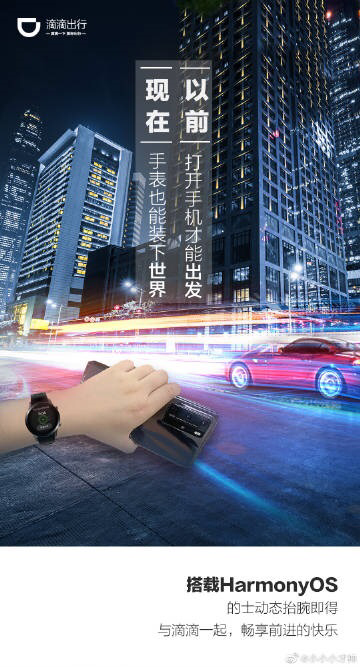 Huawei announced the HarmonyOS 2.0, EMUI 11 mobile OS and HMS Core 5.0 at its developer conference on September 10. Richard Yu, CEO of Huawei's consumer business, said during his presentation that Huawei phones will be upgraded to support HarmonyOS next year.

Huawei also announced partners for the HarmonyOS 2.0 full-scene intelligence ecosystem, with Baidu, Didi, Himalaya, WPS, Kugou and other well-known software companies among them.

Baidu Maps previously announced on Weibo that it had supported Huawei HarmonyOS 2.0, with navigation information flowing seamlessly from the phone to the watch, with the ability to view routes by lifting your wrist, and support for cycling and walking modes.

Huawei HarmonyOS 2.0 has been released to application developers on September 10 for the large screen, watch, car system Beta version, and will be released in December mobile version.