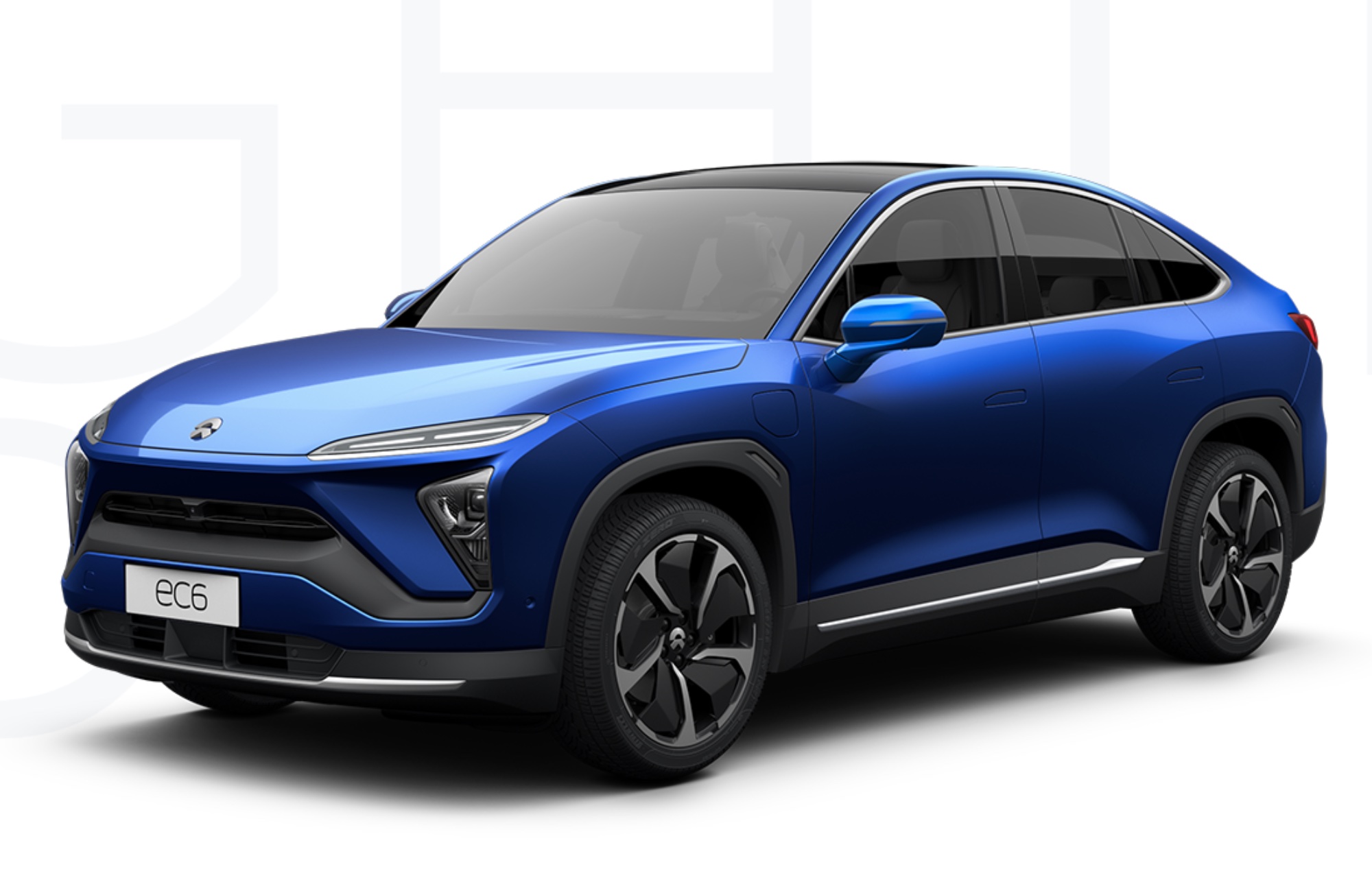 Tesla also recently updated its sales figures. According to the China Passenger Car Association (CPCA), the Tesla Model 3 sold 11,800 vehicles in China in August, up 7.2 percent year-over-year from the previous month.

Despite the disparity in sales, NIO founder William Li Bin doesn't think it will be that hard for NIO to overtake Tesla.

"NIO has done in three years what it took Tesla a total of nine years to complete from inception to mass production to delivery of the Model S," William Li Bin said in a recent media interview.

As far as the domestic market is concerned, NIO has already released and mass-produced two models, the ES6 and ES8, while Tesla only has a China-made Model 3.

There's not a lot of head-to-head competition between them, as NIO's main focus is on SUVs, while the Model 3 is focused on the coupe market.

However, with the upcoming release and mass production of the China-made Model Y, NIO will face the strongest threat from Tesla.

On September 2, Tesla Shanghai Gigafactory announced the environmental impact assessment (EIA) report for the new model's pre-start project. According to the latest news, the second phase of the Shanghai Gigafactory is now in its final stages, which means that the China-made Model Y is on track for mass production.

This means that the China-made Model Y will be ready for mass production. Some people said that the launch of the China-made Model Y is a huge threat to NIO. After all, the Model Y is positioned as a mid-size SUV, and its pre-sale price coincides with that of the NIO ES6, which is also a mid-size SUV, and the EC6, which will go on sale at the end of this month.

It's conceivable that the NIO ES6 and EC6 will go head-to-head with the China-made Model Y when it goes into mass production.

In addition, with the Xpeng and Li Auto going public in the US, NIO is also on the same page as NIO, which is the first to be listed in the US.

Meanwhile, Tesla's website also recently announced the Model Y's pre-sale options and prices, which are RMB 488,000 for the long-range version and RMB 535,000 for the high-performance version, with a note that the model will be ready for mass production in 2021.

Both news reports confirm the same fact - the China-made Model Y is just over three months away from going on sale at the earliest.

In China, NIO, Xpeng, and Li Auto can be considered Tesla's rivals.

The Xpeng G3 is priced lower than the Model Y's pre-sale price, so these two models can compete with the Model Y to a certain extent.

In terms of battery energy density, NIO has provided 70kWh and 100kWh battery packs for the new EC6, which are optional for owners at the time of purchase.

Tesla, on the other hand, has only a 75kWh battery pack for both the long-range and performance versions of the Model Y. The battery density is a huge factor in determining the range of the car. The energy density of the battery greatly determines the range, so NIO EC6 outperforms the Tesla Model Y in terms of battery mileage.

NIO has laid 143 exchange stations across the country over a period of almost 6 years to ensure the battery charging needs of its owners.

In this regard, Tesla has installed 360 supercharging stations in the country and is using third-generation charging technology. Tesla is better than NIO in terms of charging.

In terms of sensory cameras, the Model Y has eight, while NIO has only three and the remaining four are surround-view cameras.

It is generally believed that the computing power required to implement L2 autopilot is around 10 Tops, L3 requires 30-60 Tops, L4 requires more than 100 Tops, and L5 requires even more.

So when you look at it this way, the Tesla Model Y is better than the NIO EC6 in terms of automatic driving assistance features.

The Model Y, which is also positioned as a mid-size SUV, has a pre-sale price that's basically similar to NIO's two models.

Perhaps William Li Bin has seen this coming, and last month joined forces with CATL to launch a body-unbundled (BaaS) model, in which the vehicle and battery are bought/leased separately to further lower the price barrier for a passenger car.

Recently it has been rumored that Tesla could also lower the price of China-made Tesla again once the China-made battery supply chain is complete.

Despite all the controversies about Tesla, there is no doubt about Tesla's branding in the domestic market. Li Xiang, the founder of Li Auto, once exclaimed that Tesla beats most car companies in terms of sales with a range of 445km alone.

This can also be seen in the comparison of NIO and Tesla's sales.

In the future, the Model Y will be the strongest rival to the NIO ES6 and EC6 when it goes on sale.

However, William Li Bin and NIO are not only threatened by Tesla.

On June 6 this year, a photo was screened in Chinese auto circles. In the photo, William Li Bin, He Xiaopeng, and Li Xiang are sitting together with a smile on their faces, one of the few times that the three founders of the first tier of new energy vehicle startups are seen together.

They are seen as competitors in the same field, but they do remain close friends, with William Li Bin and He Xiaopeng being particularly close to each other.

NIO suffered a lot of ups and downs last year, including the departure of NIO CFO Xie Dongfei, the risk of a break in the capital chain was revealed, and the stock price even fell to $1.

Perhaps that's why William Li Bin became the "most miserable man" among many of his friends at the end of last year.

He Xiaopeng to this first time on Weibo retweeted this "William Li Bin, the worst person in 2019", and backed William Li Bin "determined to go on, will see the dawn."

William Li Bin also has support for He Xiaopeng as well.

During the live broadcast of the launch of the Xpeng P7 in April this year, William Li Bin openly helped Xpeng stand up in the blessing video, "If you want to buy an SUV, you can choose NIO and Hoptron, but if you want to buy a sedan, then you must choose the P7".

Both friends and actual competitors, their close racing is underway in the new energy vehicle market.

In April this year, NIO co-founder and president Qin Lihong said on air that NIO is working overtime to release a new generation of flagship coupe, the ET7, by the end of this year. The prototype of this model is the all-electric concept ET Preview, which was unveiled at last year's Shanghai Auto Show.

At almost the same time, Xpeng also launched its next-generation coupe, the P7, which has a range of 706km that exceeds that of most carmakers and comes with an L3 level of automatic driver assistance.

Xpeng's move is seen by the industry as the first to grab the domestic new energy coupe market earlier than ET7.

With Xpeng successfully landing on the U.S. stock market in August, NIO and Xpeng are once again on the same page, and the competition is no longer limited to models.

In addition to Xpeng, WM Motor, which is also in the top tier, is also picking up speed.

Just a month after NIO announced its new generation coupe ET7, WM Motor has also unveiled its first all-electric sedan concept, the WM Maven. The car has a combined range of 800km, features the same L4 automatic driving assistance system as the ET7, and will be ready for mass production in 2021.

This means that the NIO ET7 will then go head-to-head with the Xpeng P7 and the Wima Maven in the domestic coupe market.

"After a year of restructuring, NIO is getting back on track, moving from the ICU to the general ward." William Li Bin had described NIO's current situation to the media during the second-quarter earnings meeting this year.

According to the 2019 NIO full-year financial report, last year's total revenue was RMB 7.825 billion, with a net loss of RMB 11.296 billion and an annual gross margin of -10.9%. And after the release of this year's Q2 results, it is clear to see that NIO has gradually moved away from last year's woes.

NIO's total revenue for the second quarter was RMB 3,718.9 million, up 146.5 percent from the same period last year and accounting for almost half of last year's total revenue.

Meanwhile, second-quarter deliveries were 10,331 units, up 190 percent from a year earlier amid the epidemic.

At the same time, gross margins also turned positive from negative last year, which not only became the focus of industry attention but also fulfilled the promise made by William Li Bin at last year's Q4 earnings report.

On top of that, NIO had cash and cash equivalents, restricted cash, and short-term investments of CNY11.2 billion on its books as of June 30, 2020.

Now it seems that the recent results have given William Li Bin and NIO a long-overdue warm feeling compared to the stretched out 2019. But just as competition from the likes of Tesla, Xpeng, and other carmakers has increased the pressure on NIO.

In addition to the external threats from Tesla and Xpeng, NIO is also in a difficult situation internally.

NIO is different from JAC in that Changan NIO, when it was founded, undertook the whole field of cooperation from vehicle development, sales, and industry chain integration, to the manufacture and development of the three electric systems.

For GAC NIO, it only focuses on R&D, sales, and service, and does not involve vehicle production and manufacturing.

Through this kind of cooperation, although it is possible to build a joint venture to develop and manufacture cars and expand offline sales channels to further expand NIO brand's market coverage, there are also risks - the traditional car companies unilaterally do not cooperate.

Last month, GAC NIO hosted a speech in Beijing with the theme of "breakup", where GAC NIO CEO Liao Bing said that GAC NIO is not a branch of NIO, but an independent brand with its own brand concept and R&D team.

As early as two months ago, William Li Bin stepped down as chairman of Chang'an NIO NIO accounts for only 4.62% of the shares of Chang'an NIO, completely losing its voice.

This means that NIO currently only owns JAC NIO, but also lost the support of Guangzhou Automobile and Changan support of product research and offline channel support.

"Although Chang'an NIO and GAC NIO did not perform well before, it also indicates that NIO will lose two partners and two more strong rivals." An auto industry practitioner said.

Even more embarrassing, with the mass production of the EC6, perhaps also with its sister version of the ES6 produce internal conflicts between products, after all, the two models are priced almost similar, at the same time the two cars are also seen as from the "same mold", because in appearance, in addition to the EC6 "slippery back". "Outside, it's largely similar.

So far, since the rise of new energy car companies such as NIO, Xpeng, and Li Auto in 2014 to stand together again this year, the entire industry has moved from the selection round to the elimination round.

For NIO, the countdown to the Model Y launch is on, leaving little time for William Li Bin to prepare for the race.