GSX Techedu, a US-listed Chinese education company, began facing an investigation by the US Securities and Exchange Commission (SEC) after a spate of attack by short-sellers.

GSX Techedu said Wednesday that it is cooperating with the SEC's investigation, which requires sharing "certain financial and operating records" from 2017.

GSX Techedu was down 4 percent in Thursday's pre-market trading session after plunging 12 percent on Wednesday. 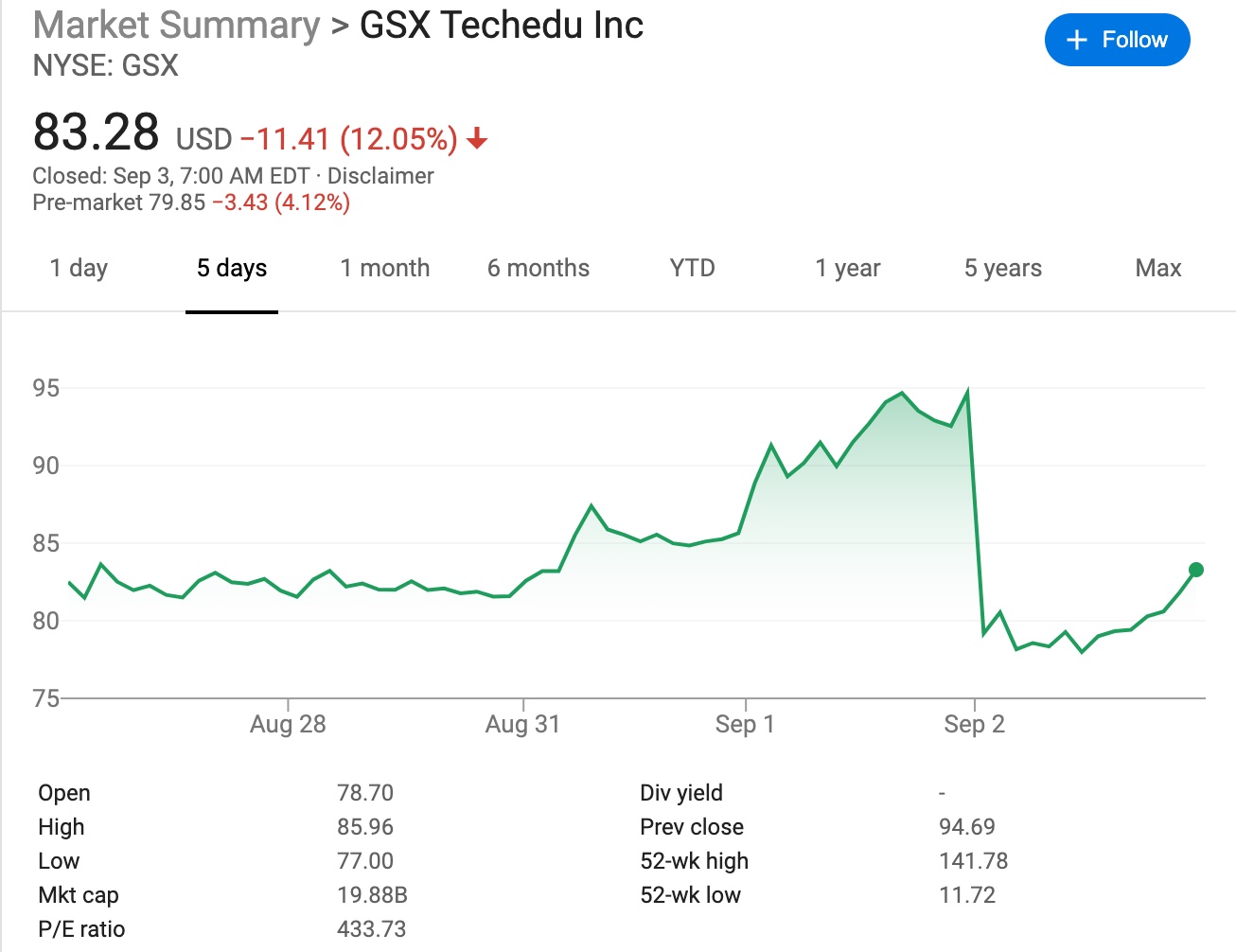 GSX Techedu, which went public in the US last June, has been targeted this year by prominent short-sellers Citron Research and Muddy Waters Research, both of whom have accused GSX Techedu of financial fraud.

After the first short selling in April, GSX Techedu stock price fell slightly but instead rose sharply, and before a new round of sniping in early August, the stock price rose as much as 500% during the year.

On April 14, Citron Research first shorted GSX Techedu, saying that the company's 2019 revenue was overstated by about 70% and that its stock should immediately cease trading and launch an internal investigation.

Citron Research then went short twice more, on April 30 and May 7, claiming GSX Techedu had falsified and falsified financial data in its audit reports.

In May, Muddy Waters also released a short-selling report, claiming that at least 70% of GSX Techedu's subscribers were fake, and possibly as many as 80%; the same was true for its revenue.

However, the price of GSX Techedu shares did not fall sharply at that time, but instead rose from April 16 to its stage high on May 8, a cumulative gain of over 40%.

The short-selling activities then faded and the GSX Techedu share price started a sharp upward trend from the end of May.

On Friday, August 7, the US stock market opened nearly an hour and a half, Citron Research on Twitter again questioned GSX Techedu suspected of fraud, GSX Techedu shares turned down more than 2%.

The same day, Muddy Waters also said after Citron Research that GSX Techedu is the largest stock fraud case in the US today. Four hours into US trading, GSX Techedu was down more than 20%.

Citron Research founder Andrew Left had previously said that GSX Techedu's key KPIs and financial data such as users, revenue, and profit were "completely fabricated", and said that sufficient information had been provided to Chinese and American regulators to believe that the audit or supervision of GSX Techedu had been conducted. Institutions can end this pretense.

Unfortunately, respectable companies such as TAL and New Oriental are being cannibalized by GSX Techedu in terms of market capitalization, he claimed.

He also criticized GSX Techedu's auditor, Deloitte China, which he said was responsible for many fraudulent cases involving US-listed Chinese stocks. "If the audits are done properly it will go to zero and delist."

This time around, GSX Techedu shares haven't rallied as much as the previous one, falling more than 36% since Aug. 7, though they're still up 280% for the year.

GSX Techedu also said Wednesday that it has hired a third-party professional organization to conduct an internal, independent investigation into the allegations against short-sellers, a move that began before the SEC investigation.

It's worth noting that GSX Techedu's earnings report released before the market opened showed an operating loss of 161 million yuan in the second quarter of this year, compared with a profit of 16.2 million yuan last year.

GSX Techedu's operating loss in the second quarter was mainly dragged down by a surge in sales expenses.

According to the financial report, the company's sales expenses in the second quarter amounted to 1.2 billion yuan, accounting for a high proportion of 1,450.4 million yuan in operating expenses, soaring 613 percent year-on-year.