Home Cars NIO and Xpeng both offer battery rental services, what's the difference between the two? 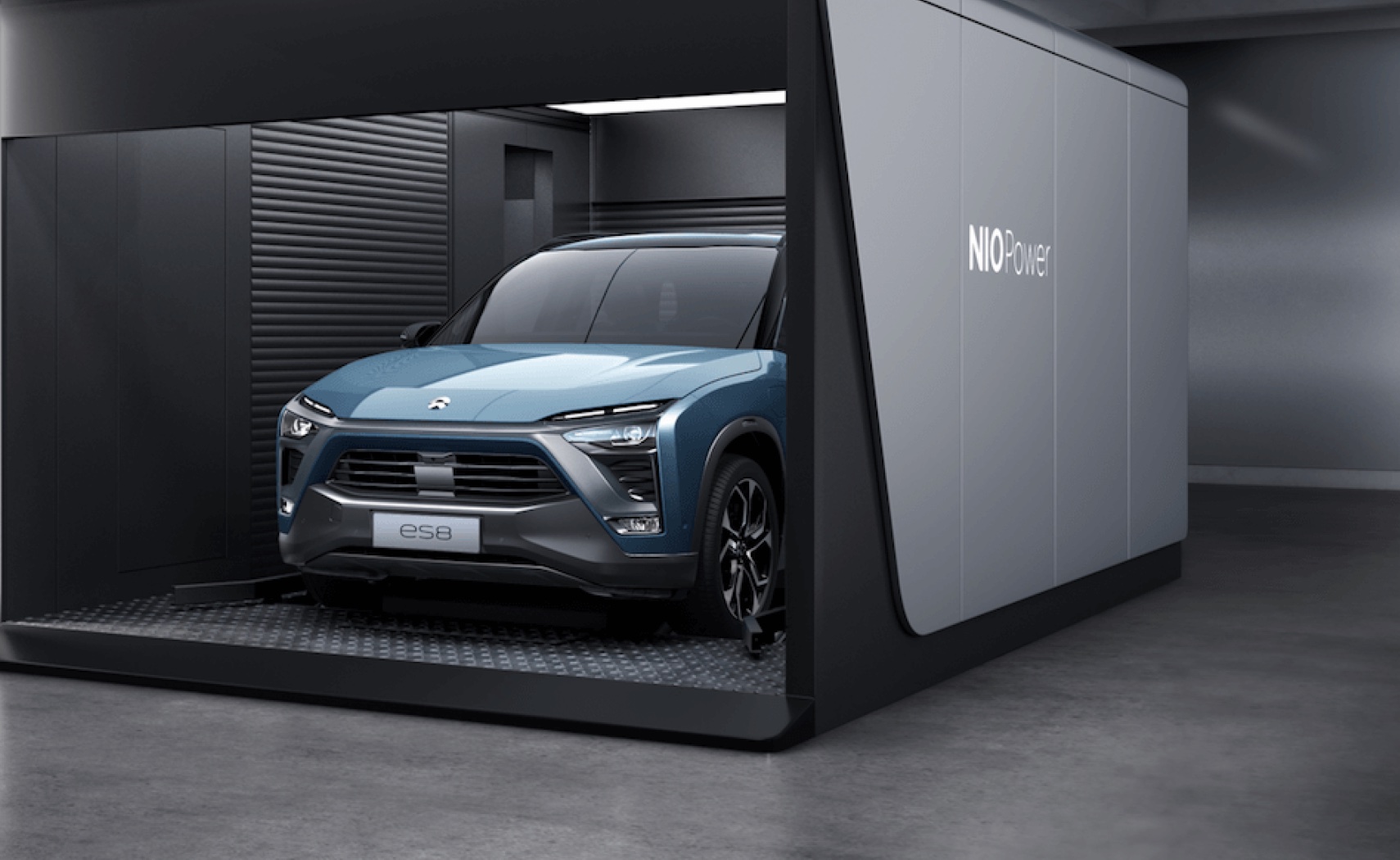 On August 20, 2020, Chinese EV maker NIO launched its BaaS (Battery as a Service) battery rental service, which had been in the works for years. Less than half a month later, Xpeng Motors also launched a similar program.

Before NIO was founded, its founder William Li Bin conducted a study to find out why consumers were not interested in electric cars.

The results showed that the majority of consumers rejected EVs because of two main reasons: lack of guaranteed charging and high battery prices.

When William Li Bin founded NIO, he began to address these two issues, and now he has launched a battery rental service to address the high cost of batteries.

Consumers who opt for the battery rental service can subtract this price from the total price when they purchase a NIO model.

The vehicle will still be delivered with the battery, but the battery will not belong to the consumer, but to Wuhan Weineng, a battery asset company formed by NIO and its partners.

It is also worth mentioning that the consumer can upgrade the vehicle's battery capacity on demand.

In addition to the 70kWh battery pack, NIO offers 84 kWh and 100 kWh battery packs, which consumers can rent on a monthly basis by paying a higher fee for the large capacity pack.

Consumers can also switch back to the standard 70 kWh battery pack for a lower rental fee. At this time, NIO has not yet announced the monthly amount that will be required to pay for the large-capacity battery pack upgrade.

By opting for the battery rental option, the price of NIO's vehicles has been significantly reduced, with the ES6 and EC6 starting at less than 300,000 RMB.

Consumers can also use financial services from different banks for this price, thus reducing the burden of buying the car.

However, unlike buying a vehicle with a battery, consumers will also have to pay a minimum monthly battery lease fee of 980 RMB per month, which will last forever as long as the battery is in use.

On September 1, Xpeng launched its own battery financing lease service.

Like NIO, Xpeng's battery leasing service prices the car and battery separately. Consumers only pay the price of the car excluding the battery at the time of purchase and commit to paying a monthly lease for the battery to get access to the car as well as the battery.

Xpeng's battery lease program will vary by the model due to different specifications.

Once consumers have purchased the naked car, they can rent the battery on a monthly basis, which varies by model, at a cost as low as RMB 580/month. The battery will remain the property of the consumer after the owner leases the car for 84 periods (7 years).

Xpeng also offers a taster plan that allows consumers to rent the battery at a lower price, but with a corresponding reduction in the vehicle's range. 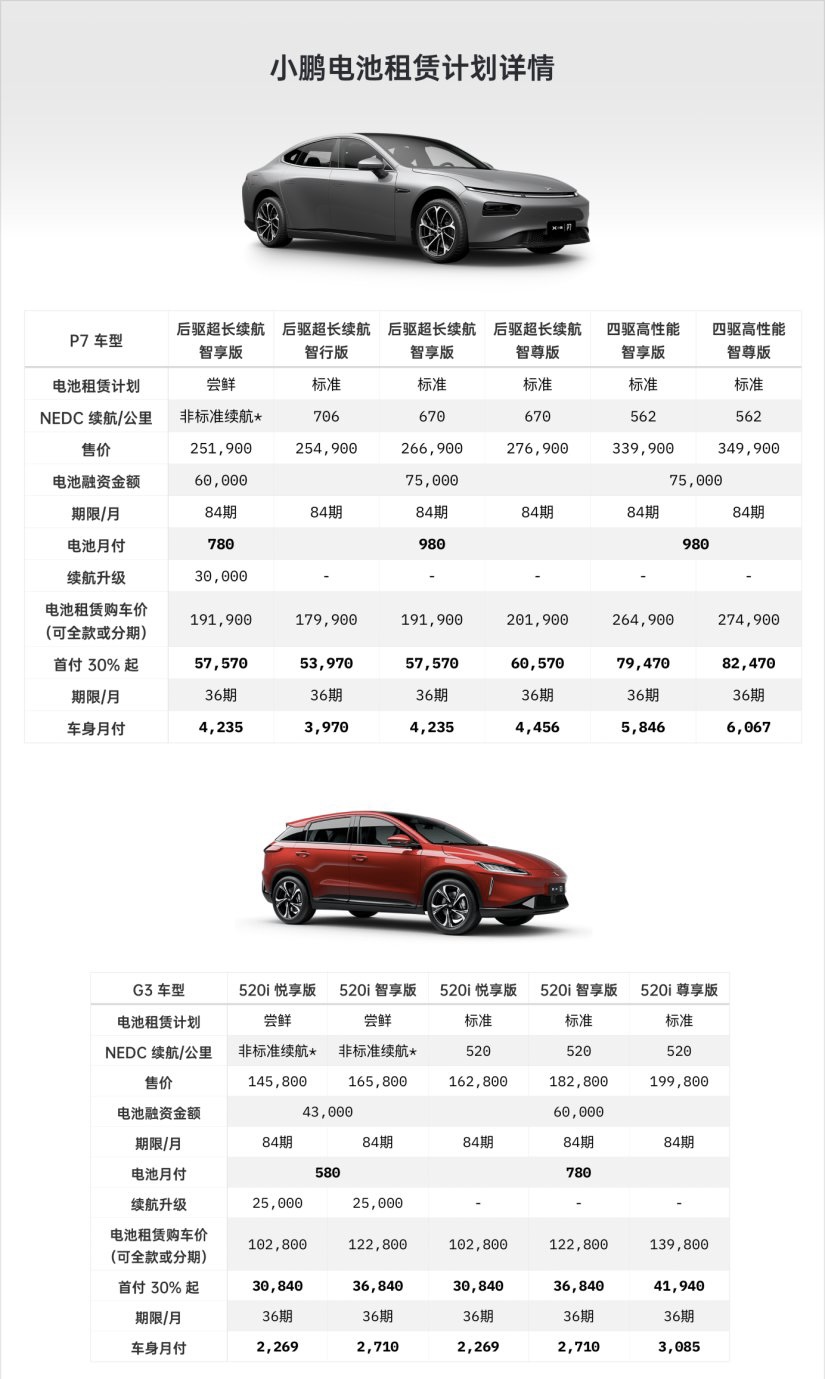 Xpeng's range is reduced through a software lockout, which allows consumers NIO to unlock the limited battery capacity for a fee.

Xpeng has yet to reveal how much power will be locked under the taster plan and how much it will cost to pay for the upgrade later. This information will be officially announced at the Beijing Auto Show.

For consumers, both NIO and Xpeng's battery rental service are sold on a "body and battery split" basis. They price the body and the battery separately, but the monthly price of the battery and the rental period are different.

NIO's body/battery split service is based on its own power exchange system, which allows the car and battery to be physically separated.

This means that if the consumer does not need the car for an extended period of time, it is possible that the battery can be returned to avoid paying the lease fees incurred while the vehicle is idle.

In addition, users can upgrade the battery pack for more advanced battery technology.

In contrast, Xpeng's current models do not have the ability to physically separate the body from the battery, so its proposed battery leasing service is more akin to selling the battery price to consumers in installments.

It's a financial service in disguise. At this stage, electric car makers are aiming to keep the price of their vehicles as low as possible in order to gain more customers.

(By contrast, Xpeng's battery rental service has a time limit, a total of 84 months). When that time expires, the owner then becomes the owner of the battery.

It seems like Xpeng's battery rental plan is a better value, but the life of a 7-year-old battery is significantly depleted, and NIO keeps the battery in relatively good condition with a battery swap.