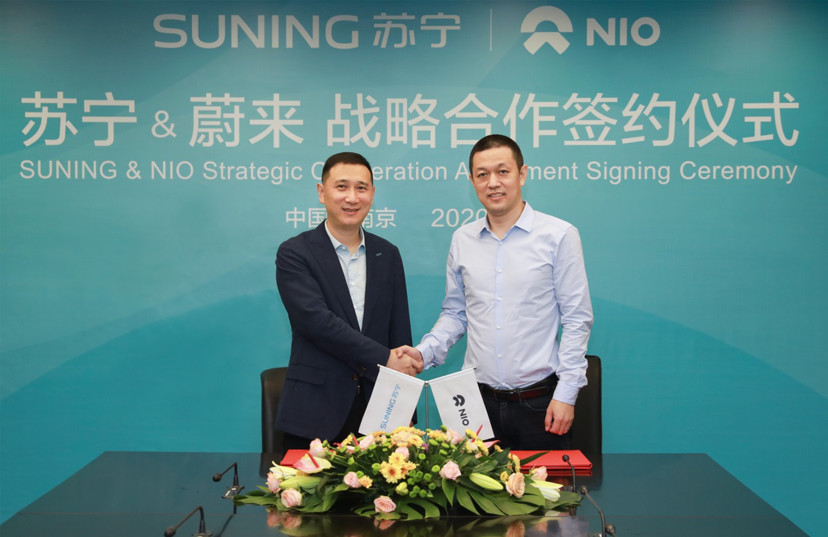 The agreement was signed during a visit to Suning's Nanjing headquarters by NIO Chairman and CEO Li Bin and marks the first time NIO has worked with a major retail company in China.

Under the agreement, Suning Plaza projects across the country will move forward with the construction of NIO Houses and NIO Space showrooms.

Suning's offline locations such as Suning Plaza and Suning Hotel will work with NIO to create a charging station customer service system.

They will also explore new types of user connectivity in the Suning Smart Home and NIO Telematics, where users' cars and home spaces are connected to each other.

NIO members will enjoy platinum membership benefits at Suning Hotels, and NIO and its partners will become preferred customers of Suning Hotels.

In addition, the two companies will integrate resources in branding to bring consumers a new experience of a better life.

Recently, Suning announced that it will continue to deploy in the field of connected cars and launch its self-developed Xiao Biu car.

Although Suning announced it will build Xiao Biu, it seems that Suning is not necessarily building the car itself, but is likely to collaborate with other car companies, including NIO.

What is certain is that the Xiao Biu will be equipped with Suning's smart screen, which will enable it to connect to the Suning connected car network.

As another screen in addition to mobile phones and TVs, the in-car screen has become a new battlefield for Internet giants. With the increasing popularity of smart cars, the potential of in-car screens will be further unleashed.

Congratulations to NIO and Sunning for wonderful partnership!