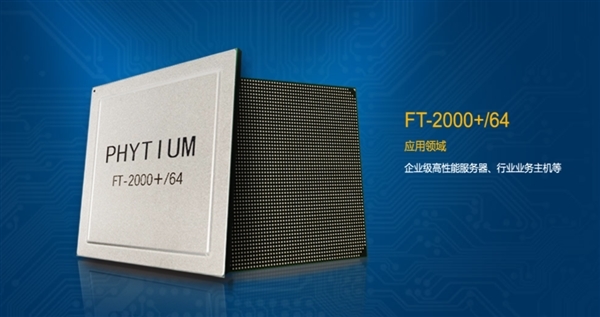 Chinese chip designer Phytium Technology recently announced that it will release a new generation of server CPU on July 23rd. Baring any surprises, it will be the long-rumored FT-2500, which features eight Compute Units (CUs) and works out to a total of 512 Stream Processors (SPs).

Its process has also grown from 0.35 micron to 16/14nm, resulting in a complete portfolio covering servers, desktops and laptops, and high-performance CPUs for embedded systems.

At the end of last year, Phytium held a launch event in Beijing and introduced a number of FT-1500, FT-2000 series Processor.

It supports one PCIe 3.0 x1 and two PCIe 3.0 x16 with 96W power consumption and peak computation performance is 588.8GFlops.

The FT-2500 series was taped out in August last year, samples came out in November, and a prototype was tested in March this year. It is mainly used for multiple CUs of servers, up to 512SPs parallel, which is more suitable for supercomputer systems.

Phytium Technology is dedicated to design, manufacture and sell high performance and low power IC chips as well as services around the products. To provide satisfying products for users is the motivation and goal of Phytium.