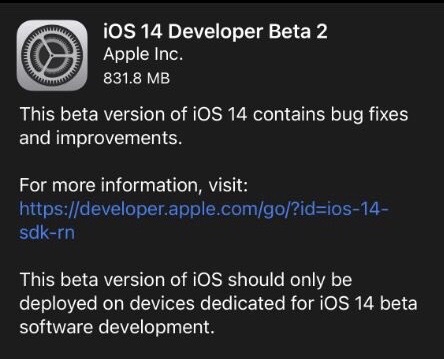 Apple today released the developer beta 2 and public beta 2 of iOS 14 and iPadOS 14, the first update since their debut in the WWDC 2020.

At WWDC 2020, Apple unveiled the  iOS 14, iPadOS 14, the first official introduction of the latest version of its iPhone as well as iPad software.

They introduced the biggest change to the iOS home screen in years, bringing widgets, as well as app library and picture-in-picture mode.

After installing the correct profil, you can download iOS from the Apple Developer Center or via OTA push from the iOS  14 or iPadOS 14.

In the beta 2 update, there's a new Calendar app icon and the clock icon has also been slightly tweaked with a bolder font and thicker hour and minute hands.

The Files app got a new widget that can be added to the Today View or the Home Screen.

The Control Center now displays which apps have accessed the microphone or the camera.