Global notebook PC shipments will rise to 171 million units in 2020, up from an original estimate of 156 million units, market research firm Omdia said in a new report.

The report expects global notebook shipments to grow at an annual rate of only 0.4 percent this year, up from an original estimate of 9.3 percent decline. 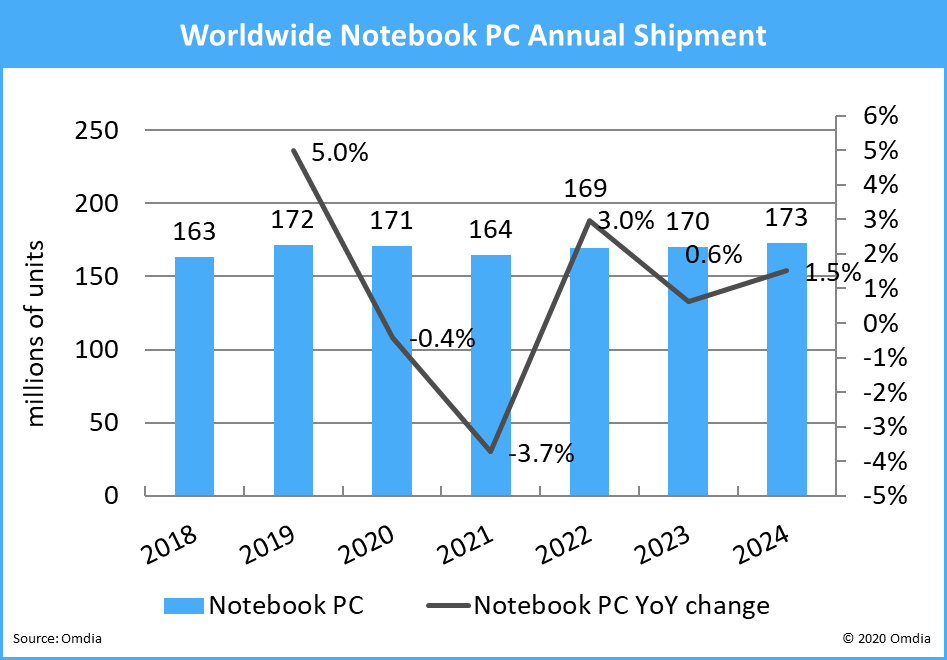 The upward revision of the forecast is based on the following four reasons:

1. The supply chain for notebook computers is returning to work faster than expected

Laptop production was expected to be limited in the first half of this year due to a new form of coronary pneumonia (COVID-19), which caused a shortage of work and upstream component parts.

2. Strong replenishment demand from European and American channels due to supply chain disruptions in February

Compared to the financial tsunami of 2007-2008, which caused a sharp freeze in terminal demand and then affected the industry chain, the impact of this new coronary pneumonia, on the contrary, because more than 90% of the notebook supply chain is in China, resulting in a shortage of supply of notebooks originally scheduled to be delivered to the European and American channels in March to April.

Furthermore, due to the sudden closure of the city, small and medium-sized enterprises have to quickly prepare the computer equipment (WFH - Work-From-Home) needed by employees to work from home.

This has caused brands to receive notices of out-of-stocks on the European and American channels after mid-March, asking for front-line inventory to be replenished as soon as possible.

This wave of back-up inventory demand is expected to continue through the end of May and into June.

Due to the epidemic, after mid-March, in line with the demand for distance learning, brands began to receive a lot of demand for educational computers in Europe and the United States, especially orders for affordable Google Chromebooks, which are expected to arrive in Europe and the United States by the end of the second quarter or at the latest by September back-to-school day.

In addition, this year also coincides with the first shipment of the Japanese government's One Educational Computer for Every Five Years Program (2019-2023 GIGA Program (Global and Innovation Gateway for All Program)), which is once again boosting global demand for educational computers.

Finally, if demand for educational computers in the US and Europe continues into the second half of 2020 or 2021, and there is no shortage of key components (e.g., Chromebook processors and power ICs), there is a good chance that global notebook shipments will turn negative to positive this year, driven by strong educational computer demand.

4. Fourth quarter end-of-promotion activities not affected by the outbreak

The outbreak was originally predicted to affect consumer spending in the fourth quarter of this year, so brands and channel merchants will take a conservative view of promotions in the second half.

However, contrary to the original prediction, as the world continues to unwind, brands and end-channel operators are more aggressive in recouping the lost performance in the first half of the year and do not plan to adjust the fourth quarter of this year's promotions, but rather to continue to have promotions from September.

In line with these promotions, the assumption that demand would have reversed significantly in August has been postponed until the fourth quarter of this year.