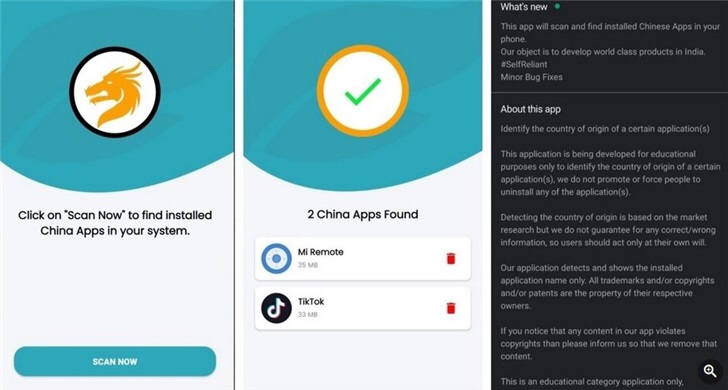 An Indian app called Remove China Apps recently sparked a huge controversy and now it has been removed from the Goggle Play Store.

The app, which uninstalls Chinese apps with one click, became the most downloaded app on the Google Play app store just two weeks after its launch last weekend.

The app's developers said they use market research to determine which country an app is from, and the Play Store's app description says the app is "for educational purposes only."

The app already had 1 million installs last Sunday, a number that soared to 5 million yesterday.

Its developer, OneTouch AppLabs, is located in India, where anti-Chinese sentiment is running high, and the developer's website says the significance of creating the app is to support the "Atm Nirbhar Bharat (self-reliant India)" called by Prime Minister Narendra Modi.

The developer said, "Removing the Chinese app will help people support 'Atm Nirbhar Bharat' by identifying the country of origin of the app installed in the phone." The developers also claim that the app is secure because it doesn't require any permissions from the phone.

Tests showed that it did recognize the Chinese apps TikTok and Xiaomi's Mi Remote on Android phones, but not Chinese developer Tencent Games' PUBG Mobile. It also failed to recognize the pre-installed apps installed on Chinese smartphones.