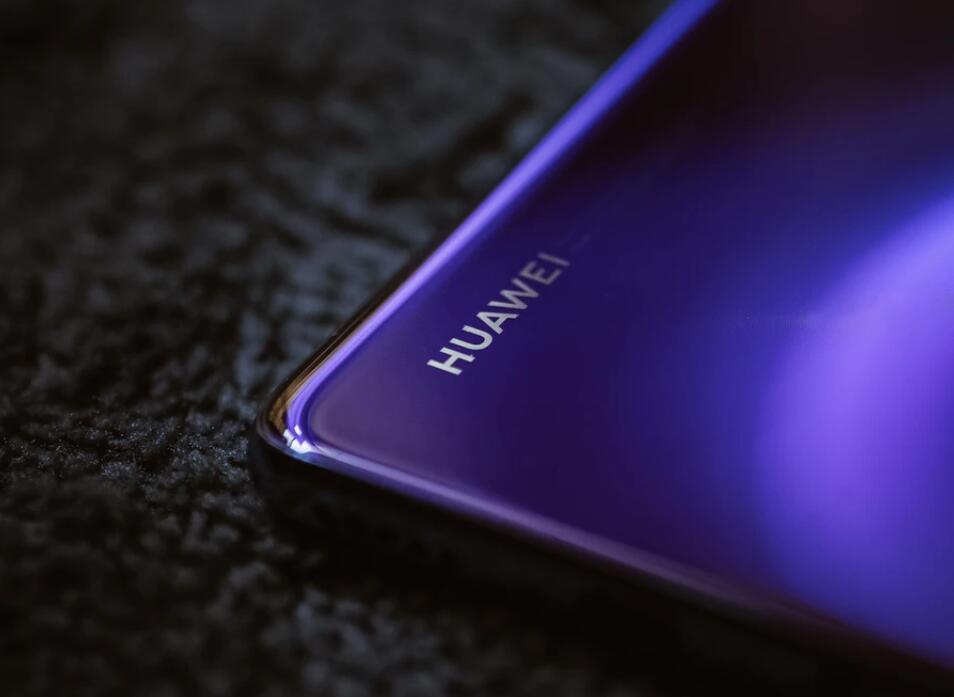 In order to offset the losses in overseas markets, Huawei mobile phones continue to focus on the Chinese market this year.

According to successive reports, Huawei (including Honor) mobile phone market share in the first quarter of this year has reached a new high, almost breaking 40%.

For mobile phone manufacturers, in addition to market share, user loyalty and the tendency to replace the phone is also important.

For Huawei phones, the delay in licensing the GMS suite has led to a significant drop in sales in their overseas markets.

It was previously reported that Huawei expects its annual smartphone shipments to fall by about 20 percent this year. After nearly a decade of rapid growth, Huawei shipments are set to decline this year.

The iPhone ownership rate is 19.0%, ranking it second. 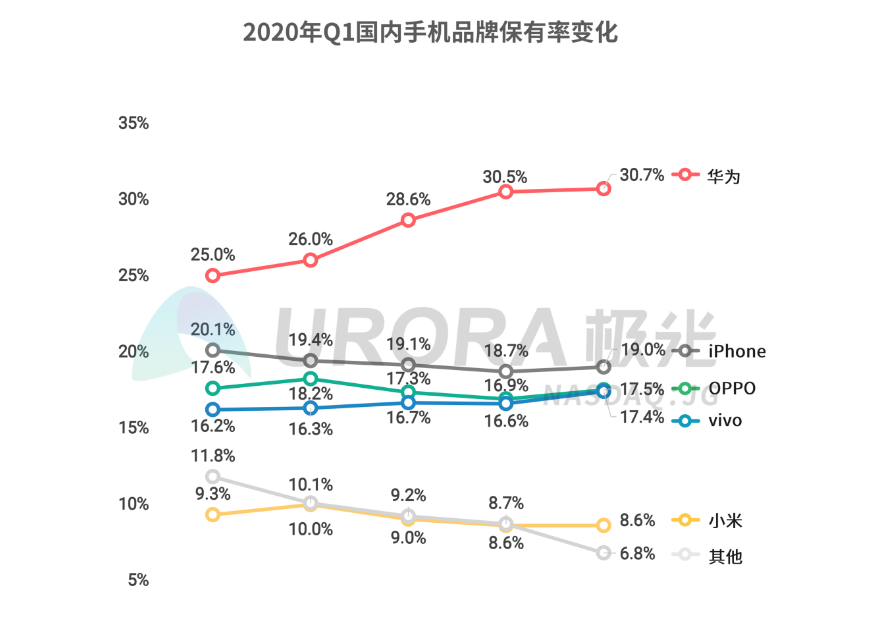 The reason for Huawei's continued growth in mobile phone ownership, in addition to the Mate 30, P30 series price cuts to boost sales, but also with the hot sales of 5G phones.

Among them, the Huawei Mate 30 Pro 5G and Huawei Mate 30 5G continued the momentum of Q4 2019, continuing to occupy the number one and number two positions in 5G phone sales, respectively.

As for Apple, while the iPhone 11's continued price cuts have helped boost overall sales, the overall model price is still very high and does not support 5G networks, all of which have limited its further development.

The iPhone 11 Pro Max came in second with 11.4 percent and the iPhone XR came in third with 9.5 percent. 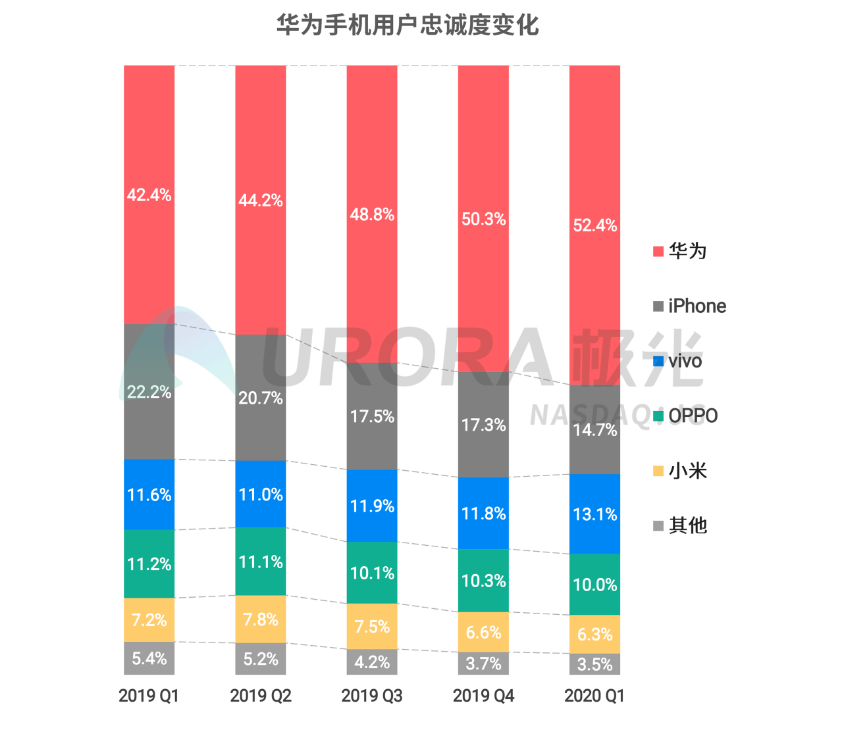 Over the past four quarters, Huawei mobile user loyalty has continued to grow. 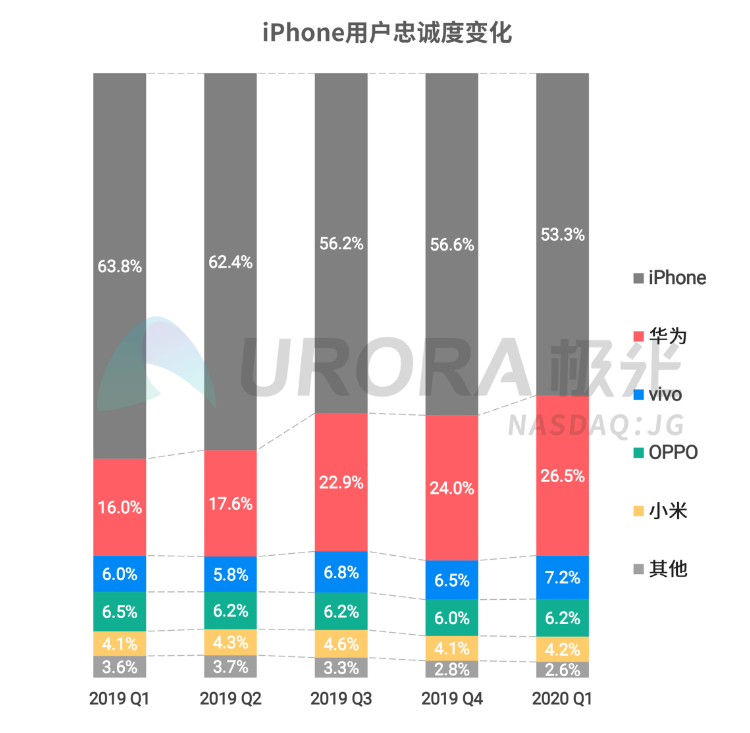 The percentage of iPhone replacement phone users choosing Huawei phones has continued to rise over the past four quarters, reaching 26.5% in Q1 2020.

In terms of trends, Huawei's mobile phone user loyalty is accelerating to overtake Apple, which has jumped to become the most loyal brand among Android phone manufacturers.

5G phones are about to explode in China 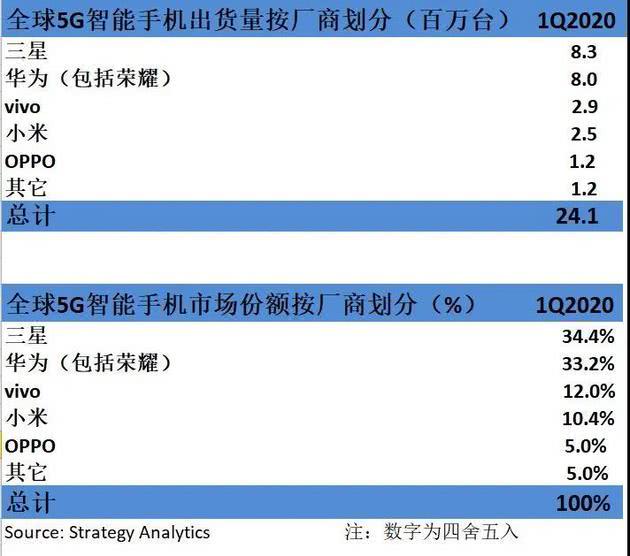 Global 5G smartphone shipments surged to 24.1 million units in the first quarter of 2020, with demand in China higher than expected, according to a report from market research agency Strategy Analytics.

According to the report, Samsung, Huawei (including Honor) and vivo ranked in the top three of the 5G phone shipments in the first quarter of this year, corresponding to market shipments of 8.3 million units, 8 million units and 2.9 million units, respectively.

Specific to the global 5G mobile phone market share, Samsung is still the number one, with a share of 34.4%.

The share of Huawei (including Honor), vivo, Xiaomi and OPPO is 33.2 percent, 12 percent, 10.4 percent and 5 percent, respectively, of the top four Chinese manufacturers.

Analysts at Counterpoint point out that in the six months following the commercialization of 5G in China, the penetration rate of 5G smartphone sales surpassed the 15% rate in the first quarter of 2020.

5G smartphone sales are up nearly 120% year-over-year. Huawei contributed more than half of the total 5G phone sales in the first quarter, followed by vivo, OPPO and Xiaomi.

5G smartphones are expected to account for more than 40% of all smartphone sales in China by the end of 2020.

Prior to that, another market research agency, Strategy Analytics, gave a report showing that global shipments of 5G smartphones surged to 24.1 million in the first quarter of 2020, with demand in China exceeding expectations.

Specific to the global 5G mobile phone market share, Samsung is still the number one, with a share of 34.4%.

Currently, industry analysts generally agree that 5G shipments in this market are expected to continue to grow significantly through 2020 as economic activity in China continues to strengthen.