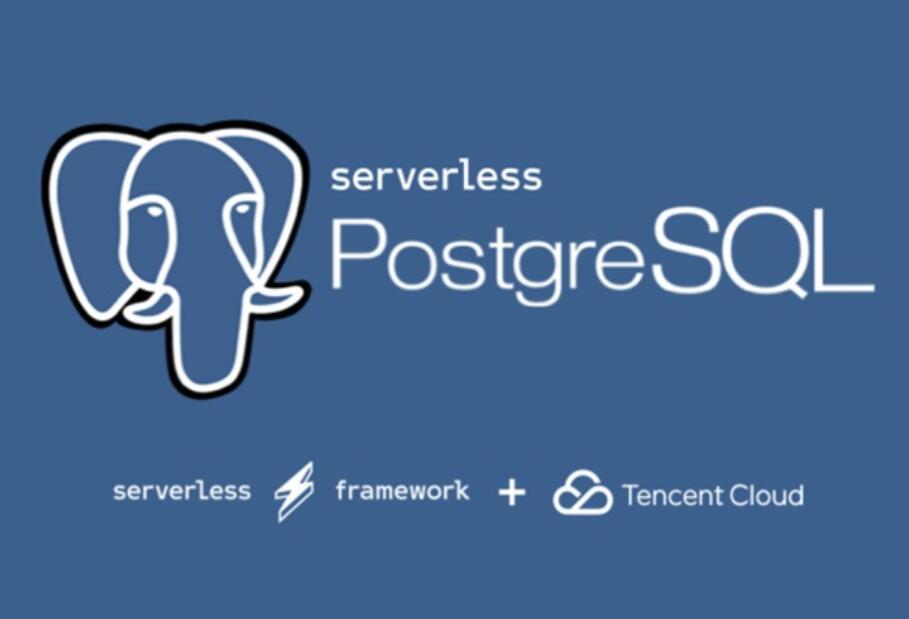 Tencent Cloud today released China's first new serverless database product-PostgreSQL for Serverless. Compared with the database on the common cloud, the database can be deployed in as fast as 1 second, and the cost is reduced by 70%.

The changes serverless technology brings to cloud computing are revolutionary. It encapsulates almost all the underlying resources and system operation and maintenance work, making it easier for developers to use cloud infrastructure, greatly simplifying the programming of cloud-based services.

Therefore, Serverless is also considered by the industry as the third-generation general-purpose computing platform after virtualization and container technology.

Lin Xiaobin, the person in charge of Tencent Cloud Database and a senior technical expert in the database field, said that the database released this time is the first new database based on serverless technology in China. It not only has the advantages of low cost and easy expansion due to serverless, but also includes the PG instance itself has the characteristics of high availability, high performance, and high security.

Compared with the traditional cloud database that requires human intervention or pre-setting during the expansion process, PostgreSQL for Serverless released by Tencent Cloud has fully automated expansion capability.

It can intelligently "inflate" and "shrink" as the number of user business requests increase and decrease, and realize automatic "throughput" of resources

This fully automated feature can bring users a more economical billing model and a more silky capacity expansion experience. It allows businesses to achieve a smooth, fully automated response based on the busyness of the request without manual intervention.

The user does not need to pay for the free time of the database, but charges according to the database resource response unit.

If the user has no request to the database, the database will automatically close all resources to respond.

This self-expanding capability will achieve a cost reduction of up to 70% for users and enable pay-as-you-go.

Since there is no initialization process, users only need to create a database instance through Tencent Cloud-related components after purchase, and the deployment can be completed within one second at the fastest, which greatly improves the deployment efficiency.

At the same time, Tencent Cloud PostgreSQL for Serverless also has outstanding advantages in terms of availability and security, including support for "one master and one backup". When the main instance is unexpectedly unavailable, the backup instance will be automatically started, and the business connection will also be transferred to the standby synchronously.

In addition, it also supports the functional advantages of the standard PostgreSQL database itself, such as rich plug-ins, convenient backup, and recovery and other features.

This database is mainly aimed at the pain points of current developers in the process of using the database, including high costs and poor performance experience.

For example, for users of low-traffic applications, it is usually impossible to maximize the performance of using the lowest standard instance, but you need to pay for excess performance.

With PostgreSQL for Serverless, you can avoid paying for excess performance.

In addition, this database is also extremely useful for scenarios such as unpredictable workloads, infrequently used applications, and development and test databases.

With the release of this database, Tencent Cloud has completed the last piece of the puzzle in the field of serverless ecology.

This means that from now on, developers can build cloud-native applications based on full-stack serverless solutions on top of Tencent Cloud, allowing developers to focus more on business rather than basic resources.

Among them, customers can implement serverless services at the access layer, computing layer, and data storage layer, so that they do not need to pay attention to the underlying facilities, but only focus on business implementation.

At the access layer, through the elastic capabilities of the API gateway, safe and stable traffic access can be achieved.

At the computing layer, Tencent Cloud's highly available and highly concurrent FaaS platform is used to implement business logic; at the data storage layer, the serverless DB released this time directly connects to the database and performs SQL operations, eliminating the need for customers to manage the connection pool, effectively reducing The threshold for developers to use.

Through the serverless full stack solution of Tencent Cloud, the online speed of business will be effectively improved, and the time from product design to landing delivery will be greatly shortened.

For example, during the epidemic of new coronaviruses, many companies have launched their own anti-epidemic apps.

With the help of Tencent Cloud Serverless full-stack solution, enterprise developers can quickly build a full-featured outbreak real-time tracking large screen through hundreds of lines of code without caring about the underlying infrastructure.

China's epidemic situation overview, real-time display of company employees' health status, entry and exit registration of foreigners and other functions. And according to the number of visits, flexible expansion and contraction, pay according to the amount.

As the global Top3 Serverless cloud vendor, the official release of the Serverless database will completely open up Tencent Cloud's ability to build full-stack Serverless applications for users.

With the continuous improvement of the developer ecosystem and the open-source ecosystem, Tencent Cloud is opening up the serverless capabilities of internally serving many core applications to all users, providing one-stop development, deployment, operation and maintenance services.