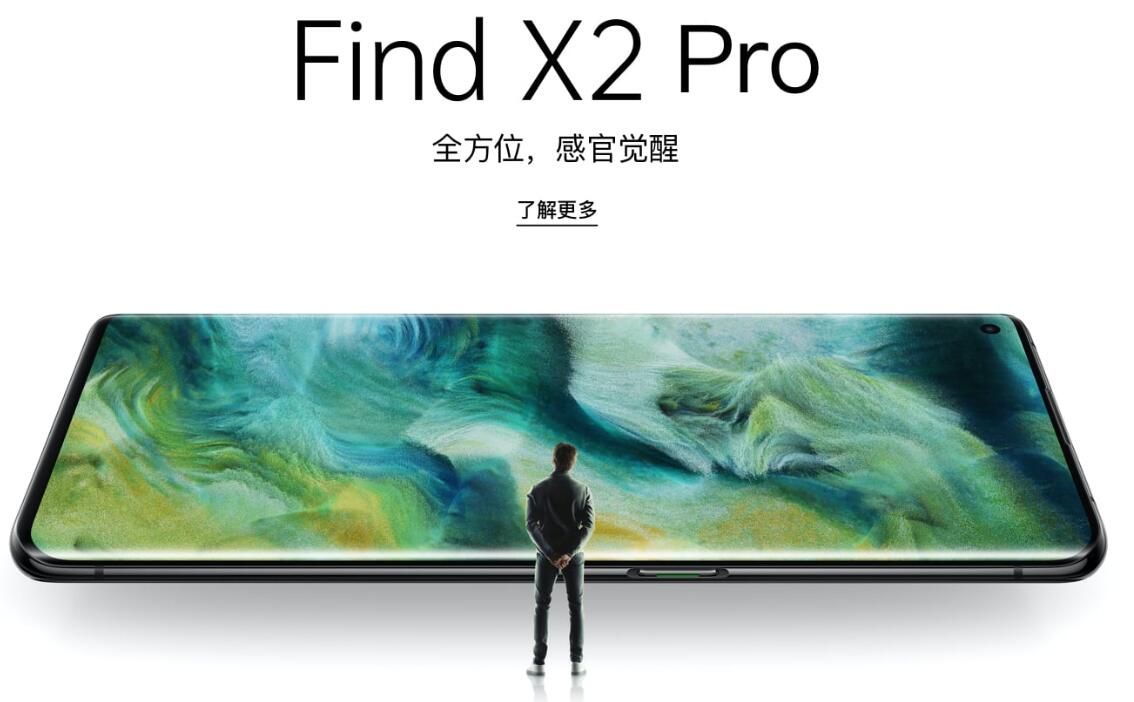 "As a head manufacturer, you must enter the high-end market," said Qu Qiang, vice president of OPPO and president of global sales.

OPPO launched a brand upgrade in 2019 and made strategic adjustments to product lines, marketing strategies, ecological construction, and global layout.

At the same time, OPPO also found its problems: the lack of high-end flagship models.

Last year OPPO has set a plan to impact the high-end market in the year of 2020 5G outbreak, and at the end of the year OPPO Find X2's stocking work was started.

However, no one had ever thought of encountering the "unpredictable" new coronavirus epidemic, and its overall promotion rhythm was affected. The conference originally scheduled for MWC was also helplessly cancelled.

On the one hand, the trend of the epidemic is uncertain, and on the other hand, the outbreak of 5G mobile phones is lower than expected.

Seemingly a bad start, Qu Qiang has a firm confidence. He said that the release rhythm of Find X2 will not change due to the epidemic situation, and he believes that it will be recognized by the global market.

At the same time, Qu Qiang made clear his determination to be a high-end product, saying that in any case, he would insist on releasing a high-end flagship for one year, making the Find X series a mainstream model in the high-end market.

Qu Qiang's confidence did not come out of thin air. When the epidemic problem gradually emerged, OPPO joined forces with the supply chain and upstream and downstream partners to make countermeasures at the first time. At present, the company is less affected by the epidemic.

In addition, in order to create a high-end brand ecosystem, in addition to mobile phone products, OPPO is accelerating the improvement of product ecosystems such as IoT and Internet services. Liu Bo, its vice president and president of the emerging mobile terminal business unit, said that it is expected that the first smart TV will be released in the second half of the year. Users provide a wealth of ecological products to help OPPO impact the high-end market.

"In the future, we are very confident that the high-end market will achieve results," Qu Qiang said.

The epidemic was like an unexpected test that caught the entire industry off guard.

Faced with the epidemic that is not known when it will be closed, third-party agencies are also continuously lowering their 2020 mobile phone shipment expectations. IDC said that the sudden epidemic has a huge and long-term impact on the overall mobile phone industry. Under Q1, the Chinese mobile phone market is expected to experience a year-on-year decline of more than 30%.

Faced with the raid of "Black Swan", OPPO immediately set up an "Emergency Team for Epidemic Prevention" to purchase protective equipment through overseas channels, especially masks, disinfection products and protective clothing to ensure the safety of front-line employees.

"At the same time, we are also thinking about whether we can produce masks." Qu Qiang revealed. With this idea in mind, OPPO quickly formulated plans, looked for suppliers, and made production plans.

"The raw material procurement and production lines will soon be in place. We can achieve a production capacity of more than 100,000 masks per day."

In addition, OPPO not only makes every effort to ensure the protective materials of employees and front-line salesmen, but also provides assistance to employees' families and partners as much as possible.

"First-line employees are our very valuable asset. Before the masks were produced, we sent a copy of the masks purchased overseas to the family members of the epidemic, including the supply chain partners." Qu Qiang mentioned .

After February 10, major manufacturers gradually resumed work, and the mobile phone industry that pressed the "pause button" was also activated. According to Qu Qiang, at the end of February, the entire market had recovered to a level comparable to last year, and such performance was still based on the premise that 50% of the stores were not open.

OPPO's rapid "blood back" is not only because of its rapid response to the epidemic protection work, but also its maintenance "stability" strategy at the level of resumption and sales.

On the sales side, Qu Qiang first "stabilized" people's minds, saying that the sales guide staff at the sales side cannot be reduced from last year, in other words, it will not lay off employees. At the same time, OPPO has actively increased online sales, including mobilizing front-line sales staff to use private domain traffic such as WeChat sales, or contactless sales methods, ensuring that the original sales are sustainable.

"In Shandong, an OPPO promoter promoted the maintenance of old customers in the circle of friends and WeChat groups in February and finally doubled the sales. This is a very good case. We also summarize the practices of these cases and try our best to Promote between global promoters and shopping guides, "said Qu Qiang.

"Return to work is difficult" is the biggest problem faced by various companies, although the return to work of OPPO's production line employees, engineers and managers has been affected. However, through active response, the resumption rate of the entire plant has reached 80%.

Regarding the current form, Qu Qiang believes that the recovery at the end of February indicates that market demand is not as pessimistic as before, and the basic plate of OPPO may maintain a stable level with the same period of last year, probably at the scale of 340-360 million units.

At the same time, the outbreak made Qu Qiang realize the importance of the global market to OPPO. "Because the global market is well-prepared, it will not have a great impact on the overall market because of some changes in a certain country. In addition, our sales structure will be further optimized. This is inspiration to us. "Qu Qiang mentioned.

Determined to impact the high-end market

"The global epidemic is serious. Why did OPPO choose to launch the Find X2 series at this point in time?"

Faced with media questions, Qu Qiang said: When Find X2 was launched as early as last year, it is not necessary to choose this time. Find X2 will not change due to the epidemic.

In December 2012, OPPO Find 5 was officially released, positioning high-end flagship products, not only equipped with the flagship machine configuration, but also used high-quality 1080P screen, which has been highly recognized in the market.

In March 2014, the Find 7 series was released. The machine was also equipped with the flagship configuration at the time. It also adopted the latest 2K screen and the world's first low-voltage VOOC flash charging technology. It also gained a lot of sound in the market.

Subsequently, the OPPO product line strategy was adjusted to focus on the R series, adopting Apple-like new product release rhythms, and the Find series has not released new products in four years.

Is the strategy to suspend high-end product lines correct?

Such a hypothetical problem is difficult to draw conclusions, but judging from OPPO's performance in the mid-end market and market share in recent years, this choice is not wrong.

However, if OPPO wants to further expand the global market and build a global brand, a mainstream high-end flagship is essential.

In 2018, OPPO re-entered the high-end market with the first dual-regular perimeter structure, Find X, which has a leading screen ratio of 93.8%.

At the same time, Qu Qiang is confident in breaking the high-end market: "OPPO has high-end flagship genes and has the ability and feelings to make such flagship products."

Opposition to the high-end market is not just OPPO.

For Huawei, Xiaomi, vivo, and OnePlus, all domestic manufacturers will surpass Samsung and Apple as their initial goals. However, is it enough to just rely on China's demographic dividend to surpass its market share?

The answer is no. The goal of domestic mobile phone manufacturers is to hope that one day they can reach the brand influence of Apple and Samsung in the global market, and hope that their own brands can stand at the top of the global industry, thereby driving the take-off of other ecosystems under the brand.

Since Mate7 seized the opportunity to counterattack Samsung, Huawei relied on Mate / P dual flagships to successfully occupy a seat in the high-end market, and gained a certain right to speak in the industry, making domestic mobile phone manufacturers see the possibility of impacting the high-end market and a sense of urgency.

Earlier this year, Lei Jun stated that he would spare no effort to create high-end flagship products to impact the high-end market, and also gave a market signal that the era of explosive growth of the single mobile phone market has passed and brand washing was basically completed. The 5G era will be the year when domestic mobile phones will break. In the future, mobile phone manufacturers need to consider themselves as a "super ecosystem."

"From the perspective of competition and industry, as a head manufacturer, it is necessary to enter the high-end market." Qu Qiang also expressed the necessity of entering the high-end market when he was interviewed by the media.

It is foreseeable that in the next three years, domestic mobile phones will start an "unprecedented" high-end battle in the global market.

On the mobile phone side, the OPPO Find X2 series balances hardware, innovation and design.

Whether it's the perception of fluency, screen, camera, or international design, this flagship model does what a big-name flagship should look like. Prices start at 5499 yuan, which is the same as the iPhone 11 price in China. .

In addition to mobile phone products, OPPO said that in addition to the mobile phone itself, high-end flagships also need to bring high-end, high-quality supporting products and services, so OPPO will continue to make efforts on smart terminal ecological products along with flagship mobile phones.

OPPO President of the Emerging Mobile Terminal Division pointed out that OPPO will focus on the four major scenarios of personal, family, travel and office, take the lead in grasping the core entrance, and continue to open up interconnection capabilities to jointly build an open ecosystem.

In 2019, OPPO announced that it will invest 50 billion R & D budgets in the next three years. In addition to continuing to focus on cutting-edge technologies such as 5G, artificial intelligence, AR, and big data, while promoting OPPO's evolution from hardware manufacturers to technology companies, it will bring cross-scenarios to users. Fusion experience.

At present, OPPO has entered more than 40 countries and regions around the world and has maintained rapid growth.

In the coming year, OPPO will continue to enter markets such as Germany, Ireland, Romania, Portugal, Belgium, etc., and will enter the Latin American market with Mexico as its starting point to rapidly expand overseas markets.

In addition, the operator channel is an important sales channel for OPPO, especially the main channel for high-end product sales. At present, OPPO also cooperates with 70 operator partners around the world, and plans to reach strategic cooperation with mainstream operators in the world in the next 1-2 years, and the business covers Europe, Asia-Pacific, Australia, Latin America and other regions.

For impacting the high-end market, OPPO is ready to be in place.

"In the future, we are very confident that the high-end market will achieve results," Qu Qiang said.